DHAKA -- For well over a decade, Monir-Uz-Zaman's business was importing toys from China to sell in his wholesale shop at a bustling market here in Bangladesh's sprawling capital.

But in 2004, his nephew, who had been living in the southern Chinese city of Guangzhou for two years to help Zaman with purchasing, asked what his uncle now jokingly refers to as the million dollar question: "Why don't you start manufacturing toys here instead of just importing those?"

It was something Zaman had thought about before. This time, however, it seemed worth taking a shot. In the wake of the Sept. 11, 2001, terror attacks in the U.S., the changed social environment made Muslim visitors feel less welcome in Western countries. Bangladeshi business people and students began looking more toward China for inspiration. Many Bangladeshis visited the country for the first time and had a close-up look at its manufacturing skills.

"I was told [by my nephew] that if I bought a few machines and molds, and started manufacturing toys here in Dhaka, the cost would be less than half," Zaman said.

In early 2005, Zaman imported some machines and raw materials, turning his small warehouse in Demra on the outskirts of Dhaka into a factory. He started producing plastic toys, such as pistols, action figures and cars. Within the first few years, his profits had doubled, then tripled. The business now has annual revenue of roughly $3.5 million.

About 200 people are now employed at Zaman's factory, 60% of whom are women. "I am thinking of expanding my factory further and start producing high-end toys like remote-controlled cars, helicopters and large action figures now," he said. 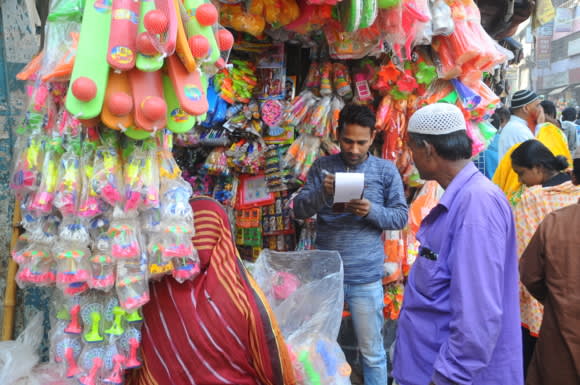 Zaman is not alone in embracing toy manufacturing.

Prior to 2010, there were about 20 small manufacturers in the sector in Bangladesh, employing some 1,500 people. Now, over 40,000 people are directly working in toy manufacturing, according to the Bangladesh Toy Merchants Manufacturers and Importers Association. Over the same period, employment in apparel manufacturing, the country's dominant export sector, remained stagnant at 4 million.

Shahjahan Mojumder, who founded the association in 2010 and served as its first president, is a toy industry veteran of four decades. He established his first factory, for rubber toys, in 1977, and a second one, for plastic toys, in 1986.

The association has played a key role in turning what was once a cottage industry into a commercial one. The group now has 206 members, of which 85 are manufacturers.

Unlike textiles and apparel, toy manufacturing in Bangladesh serves primarily the domestic market rather than foreign contract buyers. But now, the toy association and the government are setting their sights on foreign markets, too. Before 2010, Bangladesh imported $600 million worth of toys annually, 95% from China, but now imports have been reduced to $360 million a year, Mojumder said. "The market size for toys here is now about $724 million, half of which is met by the local manufacturers."

The customs duty on toys is around 25%, but since 2015-16 toy makers can import manufacturing inputs, or raw materials, with only 5% duty, down from 25%, which lowers production costs significantly, said Mojumder, who now serves as an advisor for the association.

About 80% of local toys are made of plastic and the rest are made of paper, cloth and other materials. The manufacturers import plastic polyester chips -- the raw material for all finished plastic products -- from China, Thailand, Malaysia and Indonesia, and the machines and molds from China.

"The toys produced here are of equal or better quality than the Chinese imported toys," Mojumder said.

"'Made in China' has a sort of negative connotation among people, as they think the product with this tag will not last long," Bashar said. "So we refer to 'Made in Bangladesh' in our sales pitch when we sell toys."

Many toys are sold during the annual Pohela Boishakh celebration, the start of the Bengali New Year on April 14, said Ali, who is also the owner of Everest Toys, one of Bangladesh's top toy manufacturers. The company plans to list on the Dhaka Stock Exchange in June. Women dominate the workforce in Bangladeshi toy factories, like this one in Dhaka’s Kamrangirchar district. (Photo by Mahmud Hossain Opu)

"We produce theme-based toys such as saree-clad dolls, ektara [a Bengali single-string instrument], different flutes and masks for this occasion -- and people buy those in numbers," Ali said.

Harun Ur Rashid, the current president of the toy association, believes the industry's growth is also due to cheap local labor and the population's increased purchasing power.

"Most of the toys produced here are low-end toys whose prices are in between $1 and $15," Rashid said. "I have visited China many times and I found that the factories there are now feeling reluctant to continue producing these [toys] due to increased labor cost."

Bangladeshis' purchasing power has also increased, especially in the countryside, due to the influx of remittance money from overseas workers. Per capita income increased to $1,610 in the fiscal year ended June 2017 from $1,054 just five years earlier, according to the Bangladesh Bureau of Statistics.

Rashid believes Bangladesh has garnered enough expertise in the toy industry to become an export market, too. "We asked the government to allocate us an industrial zone so that we can establish a toy park, like that at Shantou in China," he said, referring to the coastal city in Guangdong Province known for its toy factories. "We want to produce high-end toys and export those."

Shubhashish Basu, the secretary of Bangladesh's Ministry of Commerce, told the Nikkei Asian Review that the government sees strong potential in toy manufacturing and has plans to declare it a "thirst sector," a designation that would reduce the tax on raw material imports, provide cash incentives and allocate spaces in special economic zones for manufacturing.

"We are already giving cash incentives on the export of plastic goods," Basu said. Since most of the toys produced in Bangladesh are made from plastic, the toy manufacturers can access this cash incentive as well, he said.