TOKYO -- Boeing will work with Japanese companies, universities and the government to develop technologies for lightweight next-generation aircraft that use electric propulsion to reduce carbon emissions.

The collaboration will deepen Japanese involvement in aviation, an industry that Tokyo has long sought to nurture. Boeing's partners will include Mitsubishi Heavy Industries, which assembles wings for the U.S. aerospace company's 787 Dreamliner and fuselage components for its 777X series of jets.

The first phase of the partnership will involve electric propulsion. Boeing will collaborate with GS Yuasa to develop batteries for use in aircraft. Sinfonia Technology and unlisted Tamagawa Seiki will lend their expertise in small motors, while Kyushu University and the National Institute of Advanced Industrial Science and Technology will assist in developing superconducting motors.

To run aircraft on electric motors instead of jet engines, planes will need to be lighter. Carbon fiber composites are already used in aircraft bodies to reduce fuel consumption. Toray Industries, the world's leading supplier of carbon fibers, will work with Boeing to develop new materials that are inexpensive and easy to mass-produce.

For automated production, Boeing will work with Mitsubishi Heavy, Kawasaki Heavy Industries and Subaru, which makes aircraft in addition to autos. 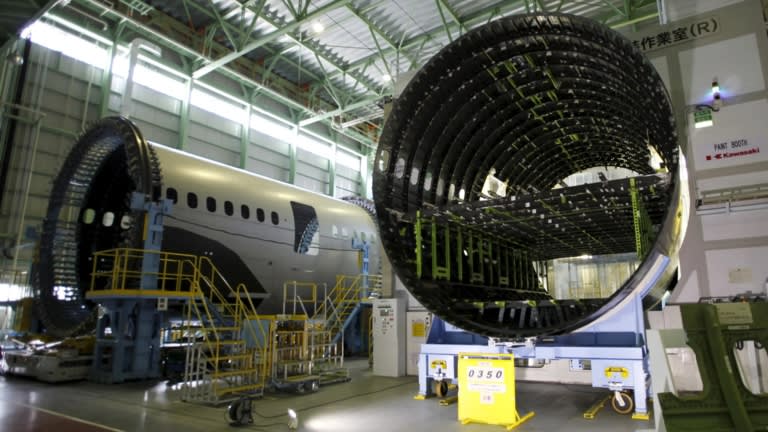 Kawasaki makes forward fuselages for the Boeing 787 Dreamliner jet at a plant in Yatomi, Japan.   © Reuters

Mitsubishi Heavy is working with industrial robot maker Fanuc to automate airframe assembly and other processes. Kawasaki Heavy has fully introduced its own robotics technology in aircraft production. The collaboration with Boeing will also incorporate the "internet of things" and artificial intelligence to automate manufacturing.

Boeing also will enter into a partnership with Japan's Ministry of Economy, Trade and Industry, which will support stronger ties between the aeropace company and Japanese industry and academia.

METI will introduce Boeing to electronics and precision-equipment makers that have the potential to advance next-generation aircraft technology. The ministry also will subsidize the development of promising technologies.

During the Allied occupation of Japan after World War II, airplane manufacturing was outlawed for seven years. That prohibition stunted the development of Japan's aerospace industry. Although the country has given birth to some of the world's biggest automakers, it has yet to produce an equivalent of a Boeing or an Airbus.

Japanese heavy industry has grown in importance as a supplier of airframe structural components and engines, but the sector has struggled in developing electrical and other equipment.