Nissan, Toyota and Honda face 10% duty on shipments to EU 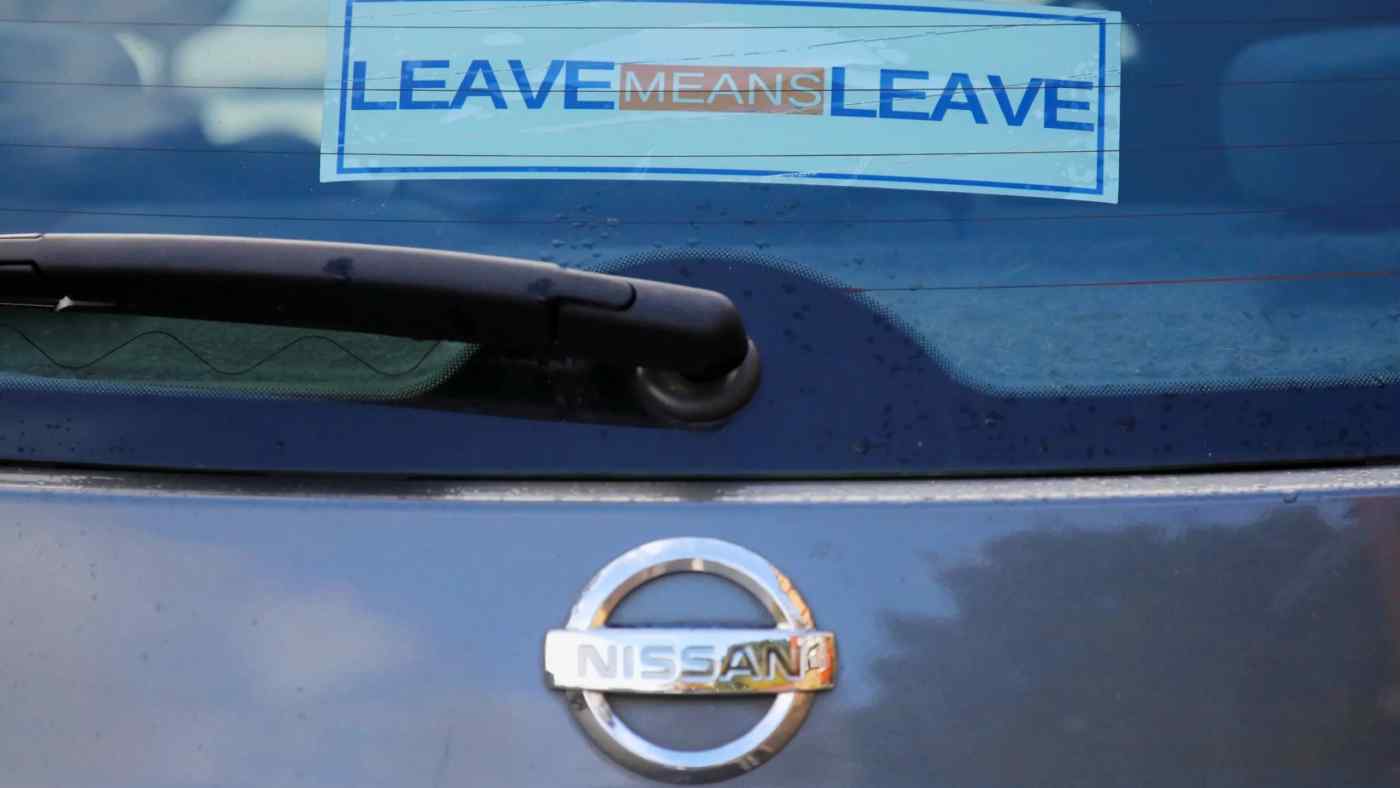 A pro-Brexit sticker adorns a Nissan car in the U.K. Nissan and Japanese peers face the loss of tariff-free exports to the continent in Britain's split from the EU.   © Reuters
TATSUYA OKADA, Nikkei staff writerJanuary 25, 2019 02:02 JST | Europe
CopyCopied

The figure, calculated by Mitsubishi UFJ Morgan Stanley Securities based on an expected 10% tariff for automobile shipments between the U.K. and the continent, would represent about 4% of the Japanese big three's projected operating profit for the year through March 2020. The damage could worsen if a messy split disrupts logistics or if the British economy sinks in the resulting tumult.

The U.K. currently enjoys tariff-free automobile trade with EU countries as a member of the European single market. Its departure is expected to leave it facing duties in line with the 10% ones imposed on shipments from outside markets like Japan and the U.S. Nissan, Toyota and Honda are projected to ship roughly 530,000 finished vehicles across the English Channel in either direction.

"A cost increase from tariffs would erode Britain's advantages as a base for European shipping," said analyst Koichi Sugimoto at Mitsubishi UFJ Morgan Stanley, adding that "automakers will likely be forced to consider shifting production outside the U.K."

Nissan is expected to face the biggest hit at 94 billion yen, followed by Toyota with 53 billion yen and Honda at 9 billion yen. Nissan's facilities in Sunderland, northeast England, can churn out about 500,000 finished vehicles per year, a scale unmatched by any of its other European production bases.

Some predict that Nissan's overseas production bases may be reshuffled due to a rethink of its relationship with French alliance partner Renault -- currently in turmoil after the arrest in Japan of Carlos Ghosn, who was ousted as Nissan's chairman in November and resigned as head of Renault this week. Candidate sites where production might be shifted are thought to include facilities in Japan's Fukuoka Prefecture.

Meanwhile, Toyota, which makes vehicles including its mainstay Corolla series at facilities in the central U.K., is projected to ship roughly 135,000 vehicles to the EU from Britain in the year through March 2020. If Brexit leaves the British plant unable to sustain competitive power, shifting output to Turkey -- a Toyota production hub for shipping to the EU -- is said to be a possibility.

A disorderly "no-deal" Brexit, in which London and Brussels fail to reach terms, could impede logistics and slow down the procurement of parts and other processes, and drag down automakers' earnings further. Anticipating a messy process, Honda said this month it plans to temporarily halt production at British facilities after the separation.