True board independence needed to meet pandemic and other challenges, experts say 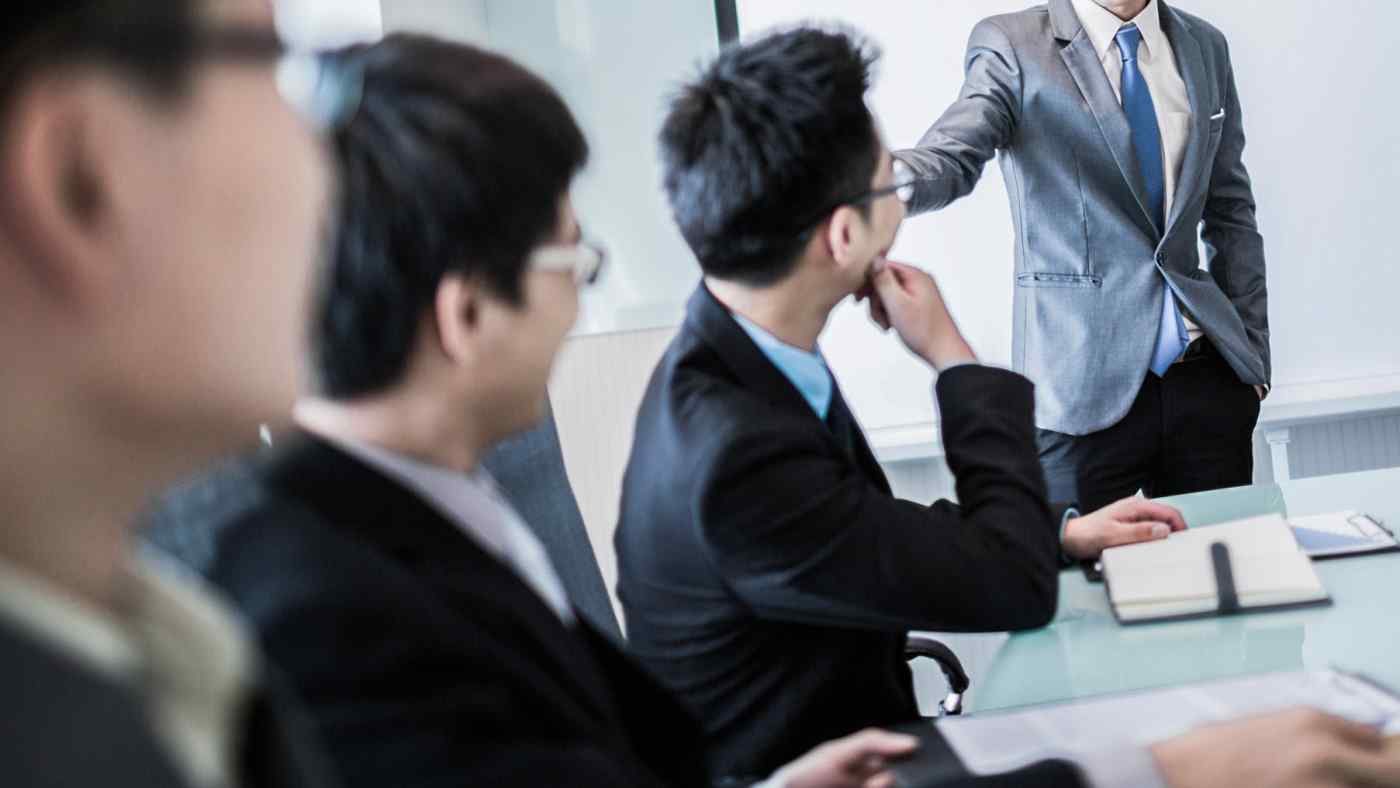 Companies in the Asia-Pacific region are being urged to diversify their boardrooms, in part to better meet the challenges of the coronavirus pandemic.
GRACE LI, Nikkei staff writerSeptember 23, 2021 14:28 JST | Hong Kong
CopyCopied

TOKYO -- Asia is lagging in boardroom diversity even as COVID-19 highlights the need for a mix of skills and backgrounds to deal with crises, according to a recent report on the region's listed companies.

In a survey of six major Asia-Pacific economies, the CFA Institute, a U.S.-headquartered association of investment professionals, looked at factors such as the ratio of independent directors, average length of tenure and gender diversity on corporate boards.

In several of these areas, the region is lagging the average of developed markets at a time when boards are increasingly expected to tackle new challenges, including cybersecurity, climate change and sustainability.

"There's a much stronger recognition that if you manage your ESG (environmental, social and governance) risks properly, then you will have a better chance of survival, especially when you're dealing with a pandemic," said Mary Leung, head of advocacy for Asia-Pacific at the CFA Institute.

"Directors, or boards, are increasingly being asked to demonstrate that they have a good handle in managing sustainability, risks and opportunities. And I think that goes towards the whole issue about board refreshment, renewal and succession planning," Leung added.

Mak Yuen Teen, a professor at the National University of Singapore's business school, also emphasized the importance of board diversity during this extraordinary time. "When things are very stable, maybe companies can get away with [a lack of diversity] for a short time. But in times when you have great uncertainty, you need people to be able to look at issues from all these different perspectives. You definitely cannot have group think in this kind of situation," Mak said. 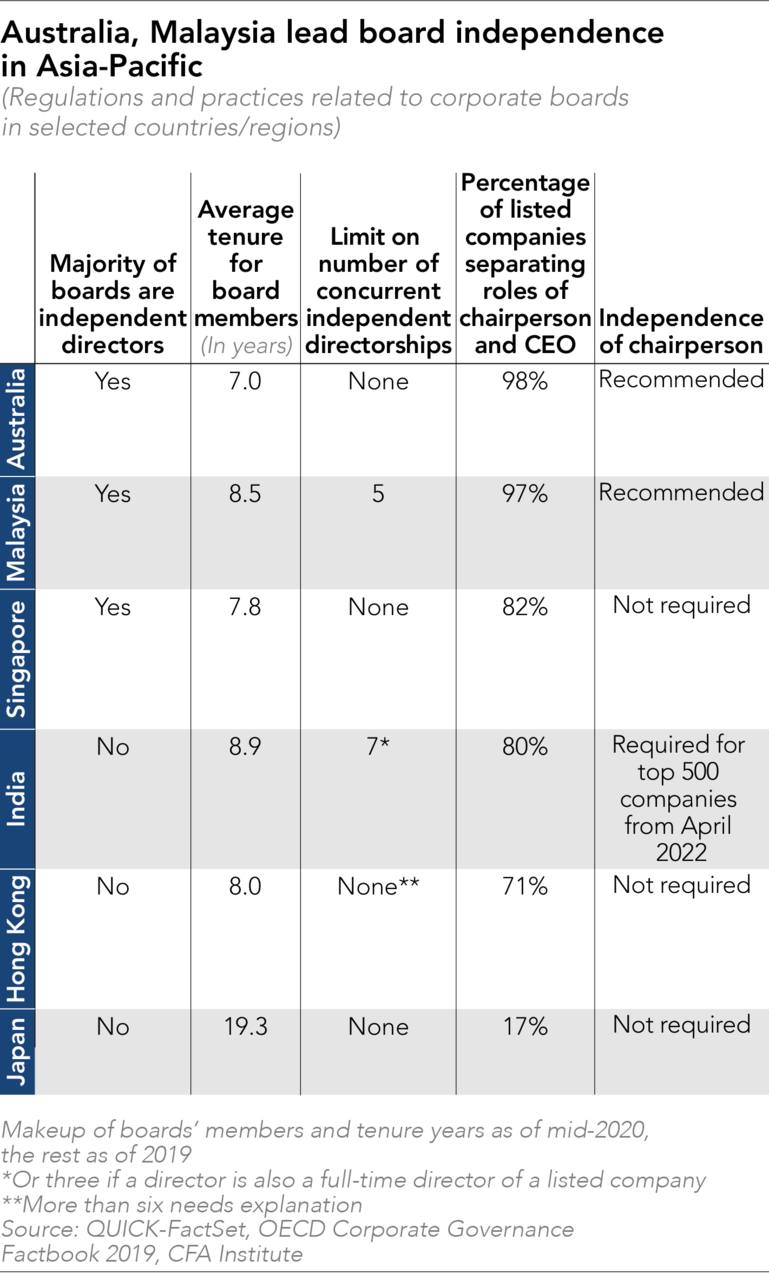 Long-serving independent directors tend to become entrenched and may go long periods without refreshing their skill sets, according to Leung. India is the only market among the six to have a mandatory cap on tenure of 10 years. Singapore, Malaysia and Hong Kong require shareholder approval for independent directors serving for more than nine years. Australia and Japan have no formal rules on the matter.

The issue of "overboarding," when one independent director sits on the boards of numerous companies, is likely the result of a small talent pool, according to the report. With increased board responsibilities during COVID-19, those directors with multiple board seats may find it hard to devote sufficient time to each company they serve, the report added.

Overboarding is most prevalent in Hong Kong. A 2018 Bloomberg analysis found that 113 listed companies on the Hong Kong Stock Exchange had a director serving on more than six boards, compared with 39 such companies listed on the New York Stock Exchange, the second highest globally. In response, regulators in Hong Kong in 2019 set a cap, limiting independent directors to serving on the boards of six listed companies. More directorships are possible, however, if a hiring company can justify its nominee's other positions to its shareholders.

The dominance exercised by controlling shareholders in some companies, especially those in Hong Kong and Singapore, is another obstacle to reducing overboarding and improving diversity.

"The crux of the issue is that many of the companies in this part of the world are controlled by a very small number of people, being in the form of a founder, a family or government," Leung said. "In many of these instances, the independent directors are chosen by the controlling shareholders. So the fact that you're on your eighth or ninth board is maybe no big deal to the controlling shareholder, because you actually sit on the boards of his other companies."

In terms of gender diversity, the laggard in the region is by far Japan, where women held less than 6% of all board seats in 2020, according to FactSet data. The country does not have a legal stipulation mandating that a set percentage of board seats be filled by women, as some other markets do, according to the report.

Hong Kong was the second lowest of the six with 13.3% of board seats occupied by women. The proportion of all-male boards in the city even increased from 2019 to 2020, the report said. Malaysia's rate stands out at 24.4%, only behind Australia's 29.6%.

The report warned against a "box-ticking" approach to putting female directors on boards and said proper training is needed to help women take on and succeed in senior management positions.

Another report published in July by BoardReady, a nonprofit organization based in Seattle, found that S&P 500 companies with over 30% of board seats held by women recorded better revenue growth for 2020 in 11 of the top 15 sectors.

Apart from board diversity, the CFA Institute recommends that a majority of directors on a company's board be independent, companies separate the roles of CEO and chairperson, and that the chairperson be an independent director. It says true board independence will not be achieved if companies simply try to go through the motions to be compliant.