TOKYO -- Japanese auto parts maker Calsonic Kansei is to buy European auto parts maker Magneti Marelli from Fiat Chrysler Automobiles for 6.2 billion euros ($7.15 billion), in an effort to gain the upper hand in the competition to develop electronic parts for next-generation automobiles developed by tech companies such as Google.

Calsonic hopes to play a key role in an industry reorganization that will extend beyond the bounds of automakers and change conventional alliances.

In late August, Calsonic President and Chief Executive Beda Bolzenius said at an event to mark the company's 80th anniversary that the company did not plan to develop self-driving technology itself, but would focus on the technology that supports autonomous driving.

Behind the scenes, however, Calsonic was making moves to acquire Magneti from Fiat Chrysler.

The combined sales of Calsonic and Magneti will come to 2.06 trillion yen ($18.2 billion), putting it ahead of the world's 11th largest auto parts maker Valeo, and close behind Huayu Automotive Systems of China, which currently holds 10th place.

Calsonic's former parent, Nissan Motor, began in 1999 to dissolve its keiretsu -- or web of interlinked companies -- and completed the process when it sold its stake in the auto parts maker to U.S. investment firm Kohlberg Kravis Roberts in 2017. 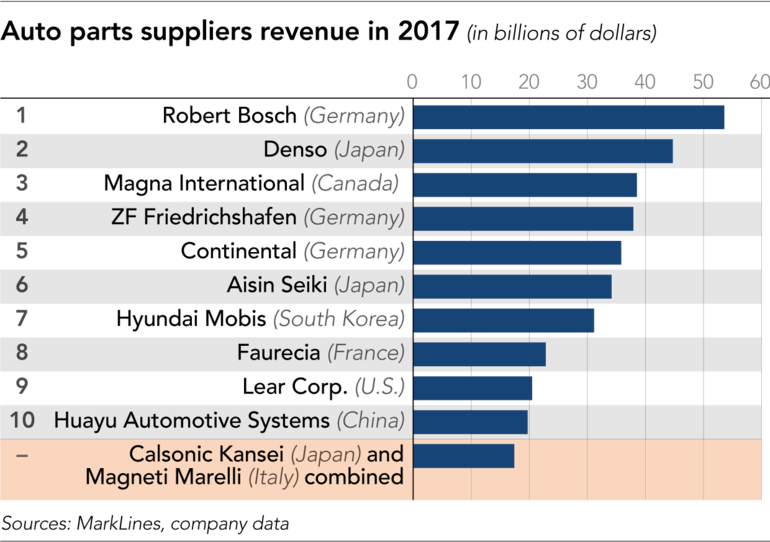 Calsonic Kansei is known for the development of products based on its electronic component technology, such as its next-generation cockpit modules used in self-driving, while Magneti is strong in electronic control units, promoting in-vehicle information systems and other products used in "connected cars." The two companies will integrate their management to accelerate the development of technologies for next-generation vehicles.

The Calsonic-Magneti deal increases pressure on other auto parts makers at a time when Google, Uber Technologies and other major information technology companies are reinforcing their knowledge in the four key areas that are shaking up the auto industry: connected, autonomous, shared and electric (CASE).

Toyota Motor and SoftBank Group jointly announced on Oct. 4 that they were forming a mobile-service tie-up, under which they would launch a joint venture. During a public discussion with Toyota Motor President Akio Toyoda, SoftBank Group Chairman and CEO Masayoshi Son said cars of the future would be loaded with semiconductors.

In the automotive components industry, semiconductors manufactured by U.S. companies Nvidia, Intel and Qualcomm are increasingly taking key roles. Today, a typical automobile is made up of about 30,000 parts, but when internal combustion engine vehicles, such as gasoline-driven cars, make way for electric and self-driving vehicles, that figure is expected to be halved.

Germany's Continental in July announced a plan to spin off its division for powertrains, including engines, and turn the parent into a holding company by the end of 2020.

In 2017, Delphi Technologies spun off its powertrain-related divisions, including engines, into a new company named Aptiv. Delphi aims to create a structure that will allow flexible technological development through organizational reforms.

The automotive component industry faces fierce competition, with challenges from beyond traditional industrial borders. The general concern prevailing in the industry is that companies cannot survive the competition in next-generation technologies if they continue to rely on the industry's traditional business relationships. The tie-up between Calsonic Kansei and Magneti Marelli represents yet another example of companies trying to break out of the traditional mold.