Mushrooms are grown under solar panels on farmland in Miyagi Prefecture, northeastern Japan.

TOKYO -- Farmers in Japan could be in for a windfall if a new practice of combining agriculture with solar power generation takes root.

Converting idle land to solar power generation has often been touted as a solution to rural Japan's woes, but restrictions have often proved a hurdle. A reduced feed-in tariff has discouraged many newcomers -- both businesses and individuals -- entering what was once seen as potential gold mine.

But in 2013, the Japanese government partially relaxed restrictions on the use of farmland for solar power generation, provided it was simultaneously used for agriculture. 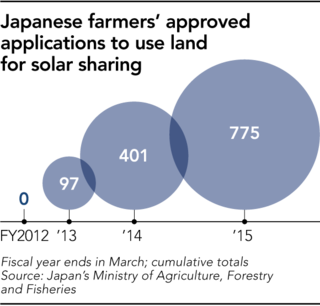 Now, with help from Sustainergy, a Tokyo-based renewable-energy startup, Hitachi Capital and homebuilder Daiwa House Industry aim to generate a combined 4,000 kilowatts of solar power at two locations in northeastern Japan. The 2,000kw produced at each plant represents the largest output of any such facility in the country.

The output will be sold to Tohoku Electric Power and could fetch an annual 140 million yen ($1.27 million). The land underneath the panels, meanwhile, is expected to yield an annual 40 tons of cloud-ear mushrooms -- a crop that requires little sunlight.

Most commercially available cloud-ears in Japan are imported from China, and it is hoped there will be ample demand for the home-grown kind.

A total 1.2 billion yen will be spent on setting up the facilities in Miyagi Prefecture, which are set to come online at the end of September.

If the project goes well, the concept can be promoted to farmers and utilities across the country, with leasing specialist Hitachi Capital providing the panels and equipment to farmers at no initial cost, and Daiwa House taking charge of their construction and maintenance.

The business model would strip away the hurdles farmers currently face when trying to enter commercial solar power generation. They would be able to secure enough electricity for their own needs and have a surplus from which to gain an additional source of income.

The Hitachi unit has arranged leasing contracts for facilities generating 97 megawatts of traditional solar power across the country, and is now keen to leverage that expertise to push dual land use.

Since the change in legislation, the concept has attracted several companies. SBI Energy earlier this year began solar power generation on farmland in Chiba Prefecture, just east of the capital and Mitsubishi Electric sells smaller panels suitable for installation over farmland.

As the population ages and young people leave the countryside in their droves, much of Japan's farmland now lies abandoned-- more than 10% of the total, according to some estimates.

The Ministry of Environment believes the idle space that could be used for such projects might be able to generate 70,000 megawatts -- enough to supply 20 million households.