Profit up despite falling camera sales, but analysts question outlook Canon's imaging business has surprised to the upside before, but sales were down in the first quarter.   © Reuters
Nikkei staff writersApril 26, 2018 04:56 JST | Japan
CopyCopied

TOKYO -- Canon clinched a 4% rise in first-quarter profit despite weakness in its mainstay cameras and office machines, thanks to a chipmaking equipment business thriving on Asian demand for semiconductors.

Group net profit rose to 57.1 billion yen ($522 million) for the three months ended in March, with tighter controls on research and development and other costs also contributing to the higher result, the Tokyo-based company reported Wednesday.

Industrial products, including semiconductor lithography machines, which print circuit patterns on chips, provided 18%, or 732 billion yen, of Canon's sales last year. Those figures are forecast to rise to 20% and 839 billion yen in 2018.

The medical system business, much of which it acquired from Toshiba in 2016, saw a sales decline of 11%. 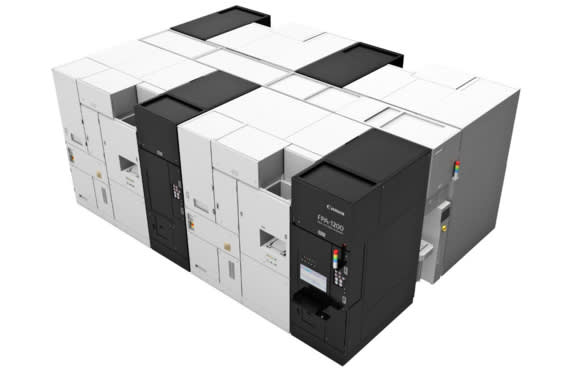 Meanwhile, foreign exchange rates worked in Canon's favor. While the yen appreciated more than Canon's assumed rate of 110 yen to the dollar, that impact was offset by the Japanese currency's weakness against the euro. The company generates a quarter of its sales in Europe and is known as one of the Japanese blue chips most exposed to changes in the single currency.

Projections for the full year ending December 2018 were unchanged. Canon still expects sales to grow 5% to 4.3 trillion yen and net profit to rise 16% to 280 billion yen.

But stock market watchers remain unconvinced by these estimates. A consensus forecast compiled by Nikkei affiliate QUICK calls for a 14% profit gain to 275 billion yen. Canon shares fell 1.64% on Wednesday, against the Nikkei Stock Average's 0.28% decline.

Analysts were particularly doubtful of the prospects for the office equipment business, which accounted for 46% of sales last year but faces a shrinking market. Canon forecasts a roughly 30% rise in the segment's operating profit this year.

Company forecasts for multifunction unit sales have been bullish for the past five years or so, but "the targets haven't been met," one analyst said.