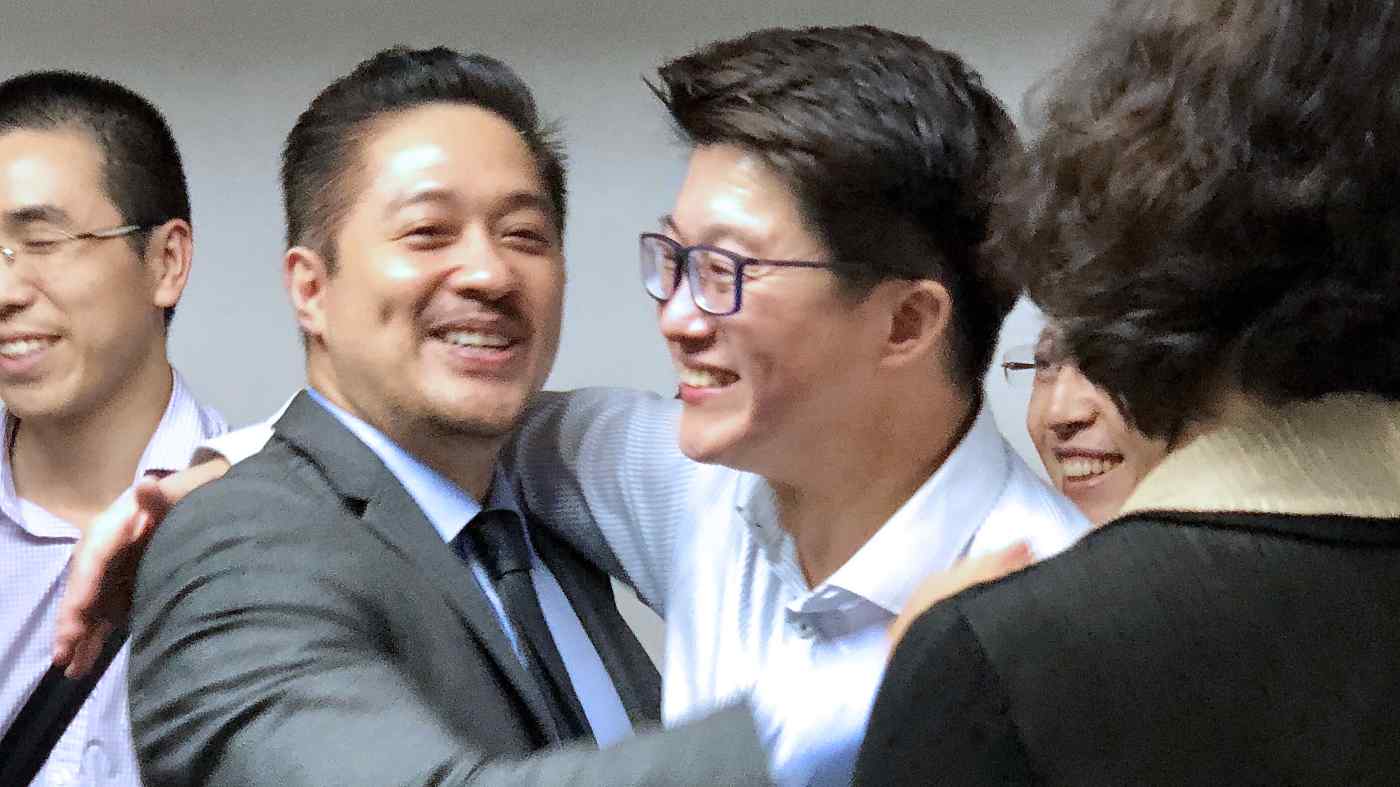 Representatives from Udenna and China Telecom hug after their partnership was named the "provisional" winner of a third mobile communications license in the Philippines on Nov. 7. (Photo by Cliff Venzon)
CLIFF VENZON, Nikkei staff writerNovember 7, 2018 21:22 JST | Philippines
CopyCopied

MANILA -- An alliance between China Telecom and Davao-based tycoon Dennis Uy is poised to clinch the third major telecom license in the Philippines after it emerged as the lone qualified bidder at an auction on Wednesday.

Two other bidders -- a consortium led by Tier One Communications and LCS Group as well as Philippine Telegraph and Telephone -- were disqualified after submitting incomplete documents. Both parties will appeal their disqualification and if successful, their bids will be reopened, said Eliseo Rio, officer in charge at the Department of Information and Communications Technology.

Barring further appeals and court interventions, Mislatel will be officially declared the winner in three days if it passes the post-bid evaluation. The winner will get additional radio frequencies and will be able to use state telecom assets to challenge PLDT and Globe Telecom, the two major players in the $5.2 billion duopoly that Duterte has sought to dismantle.

On Wednesday, PLDT shares fell 5.64% while those of Globe tumbled 8.9%. In contrast, shares of Chelsea surged by 28.6% and those of ISM Communications, the backdoor listing vehicle of Uy's Udenna, jumped 35%.

"We promise that we will work very hard to give the Filipino people world-class telecommunications services," said Adel Tamano, vice-president for corporate affairs at Udenna.

Bilateral relations between the Philippines and China have improved significantly under Duterte, despite a maritime dispute in the South China Sea.

For Uy, telecommunications is his latest venture, after taking over companies from restaurants to shipping lines, and securing contracts and loans since Duterte came to power in 2016. Uy has also partnered with China National Offshore Oil Corp. on a liquefied natural gas project.

Opening the telecom industry to new players has been a priority of the Duterte administration amid widespread public frustration over slow internet speed. In February, he pressured PLDT to surrender radio frequencies to the government for free. In September, Duterte threatened bureaucrats that he would take over the bidding process if a new player was not named by November.

Wednesday's auction, however, attracted fewer bidders than expected after at least 10 companies purchased bid documents. Converge ICT, a company backed by South Korea's KT, said it withdrew from the auction due to demanding requirements from the government.

"For example, the conditions do not provide for a justified delay even if the committed phase of infrastructure installation is delayed because of refusal by local government units to issue permits," it said in a statement. "In contrast, the current players were not subjected to comparative commitments or penalties or forfeiture of licenses."

The new player faces the challenge of competing with the two incumbents PLDT, which has Japan's NTT Group as a key shareholder, and Globe, which is partly owned by Singapore Telecommunications. Both companies are spending a combined $2 billion this year, a record capital expenditure, to fend off looming competition.

"China Telecom has deep pockets and technical expertise," Fitch Ratings director Janice Chong said. "But the ability to monetize data traffic continues to be a challenge even in some developed markets."

The analyst sees an opportunity for China Telecom in the internet broadband segment given the saturated mobile market. To see "meaningful change," Chong urged the government to ease the 40% foreign ownership restriction in the telecommunications sector and pave the way for tower sharing and interconnections.

China Telecom is expected to offer cheap prices to win customers, adding pressure on PLDT and Globe, whose margins are already being squeezed by elevated capex and deteriorating traditional services, such as voice and text, Chong said.