China makes gains against US in high-tech markets TOKYO -- China is narrowing the gap between it and the U.S. in the race for dominance in high-technology markets, according to a recent Nikkei analysis.

Chinese companies expanded their market share in nine sectors including mobile infrastructure in 2018, while the U.S. grew in eight, the analysis of data collected by various research companies showed.

With the U.S.-China trade war battering the global economy, there could be a shake-up in high-tech markets down the road.

Of 74 high-tech products and services covered by the survey, an analysis of the top 5 shares in 25 key markets found that Chinese companies expanded their presence in mobile base stations as well as smartphones and tablets.

Despite the U.S. government's de facto ban on American exports to Huawei Technologies -- which is stepping up development of fifth-generation, or 5G, cellular network technology -- the Chinese telecommunication gear maker boosted its share in mobile phone base stations by 3.0 percentage points from the previous year.

The gain solidified Huawei's position as the sector's biggest supplier, with compatriot ZTE ranking fourth, according to IHS Markit.

In the smartphone market, Huawei placed third, narrowing the gap with second-ranked Apple. Xiaomi and Oppo -- another Chinese maker -- captured fourth and fifth places, respectively, according to IDC.

American companies expanded their shares in eight markets, including cloud services and virtual reality headsets, according to both IHS Markit and IDC, with the top five spots in cloud services occupied by the U.S.

Amazon.com and Google combined for more than 60% in the artificial intelligence-based smart speaker market, according to Canalys. But Chinese companies, including Alibaba Group and Xiaomi, are closing in. Alibaba's improved voice recognition has attracted Japan's Honda Motor, which is planning to install the company's smart speakers in its cars.

Chinese shares dropped in two markets, including security cameras, while U.S. shares logged falls in eight sectors, among them security software. However, Chinese and U.S. companies retained their leads, as they took four of the top five spots in each market, respectively. 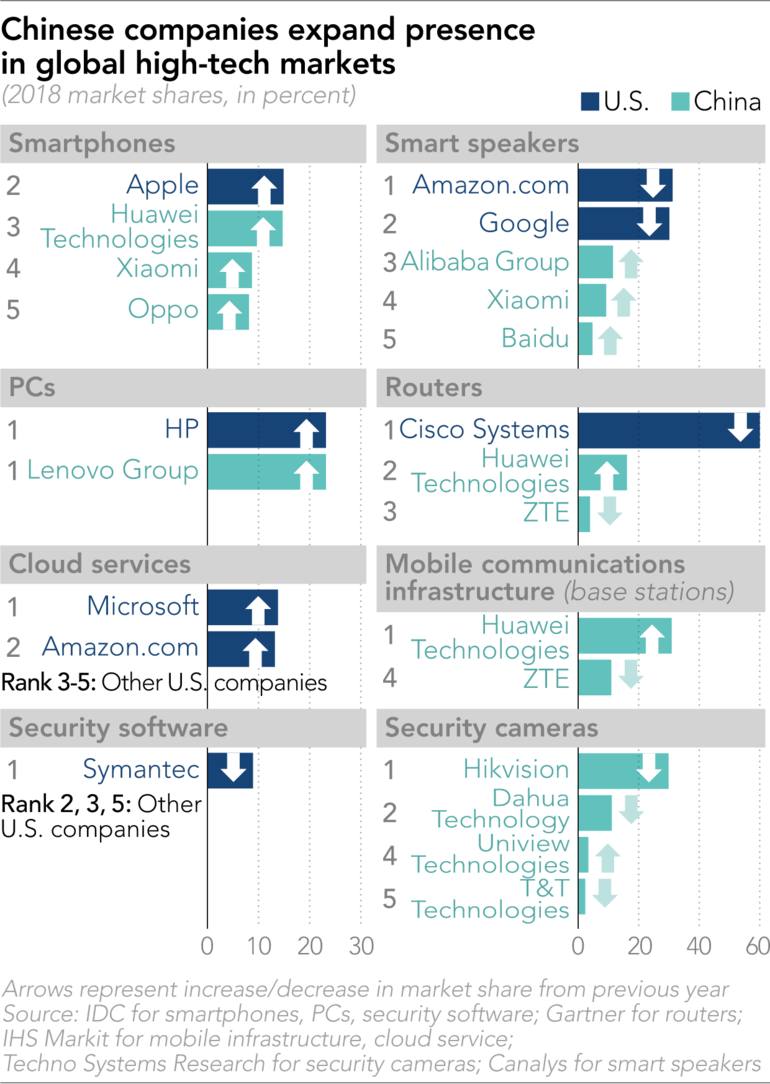 With the U.S. and China agreeing in June to resume trade talks, U.S. President Donald Trump postponed imposing a fourth round of tariffs on Chinese imports. But his administration is expected to maintain pressure on Chinese high-tech companies for now.

As U.S. policy to contain China's rise in high tech has already begun affecting global production of smartphones and other operations, shares in some markets are likely to change drastically in 2019 from the previous year.