BEIJING -- State Grid Corp. of China(SGCC), one of the companies spearheading Beijing's 21st-century Silk Road project, plans to boost its overseas investment to up to $50 billion by 2020.

Since first venturing abroad in 2009, the state-run power transmitter and distributor has increased its cumulative overseas investment to more than $10 billion, including the purchase of stakes in power grid operators in Brazil and Greece in 2016. A big factor driving the overseas push is the attractive foreign earnings-to-assets ratios, which are three to five times higher than those in China. 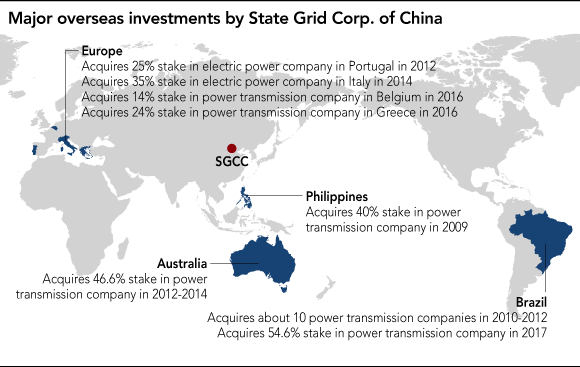 "Greece -- where Asia, Europe and Africa converge -- is strategically important and we will accelerate our foray into Europe," Kou Wei, president of SGCC, said during a ceremony late last year to announce the company's 320 million euro ($343 million) purchase of a 24% equity stake in an electricity transmission company owned by Public Power Corp., Greece's largest power company.

SGCC is keen to develop electric power infrastructure across Asia and through Europe under Chinese President Xi Jinping's "Belt and Road Initiative" to create a modern-day Silk Road. The company's mission is to support the growth of Chinese companies in Europe and Africa by supplying them electricity.

In 2016, SGCC bought a 14% stake in Eandis, a leading Belgian power grid operator. The move followed the 2012 purchase of a 25% stake in Portuguese state power company Redes Energeticas Nacionais and the 2014 acquisition of a 35% interest in an Italian power company.

With European companies starved for funds due to the slumping regional economy, SGCC has been able to steadily strengthen its foothold there by helping them.

For its Asian operations, SGCC agreed with Russian power grid company Rosseti in June 2016 to set up a joint venture in Beijing. The Chinese company plans to kick off work this year under the partnership, which will see SGCC help improve power grids in Russia with its cutting-edge technology. In 2016, the two companies agreed with SoftBank Group of Japan and Korea Electric Power of South Korea to conduct joint studies on establishing an international grid in Asia. The consortium is already conducting research on building an undersea cable system in Northeast Asia and will seek to find ways to more stably supply energy from such sources as solar and wind power.

SGCC's ambitions do not end with the Silk Road. On Tuesday, the company announced it was boosting its stake in major Brazilian grid company CPFL Energia to 54.6%, adding to the 23.6% interest it bought for some 5.8 billion real ($1.82 billion) in September. CPFL controls 14% of the domestic market, operating grids in Sao Paulo and other states.

With the stake increase and purchase of shares in CPFL's listed subsidiary, SGCC's total spending on the Brazilian company will far surpass the $1.82 billion it initially pumped into the business.

That investment comes in addition to SGCC's acquisition of about 10 grid operators in Brazil between 2010 and 2012.

SGCC's first overseas push started with the purchase of a 40% stake in a grid operator in the Philippines. It subsequently began moving into Brazil and Europe, as well as purchasing assets in Australia and investing in a grid operator there.

Within just six years of venturing abroad, SGCC had already posted impressive overseas figures: total investment of over $10 billion and more than $40 billion in assets.

The company is stepping on the gas not only because, as one of China's largest state-owned companies, it is acting in accordance with government policy; it is also eager to reap the benefits of an overseas earnings-to-assets ratio that is three to five times higher than in China.

The company's cumulative overseas investment is projected to reach between $30 billion and $50 billion by 2020, as it has no plans to end its investment blitz.

But mounting international concern about the growing presence of Chinese companies could weigh on SGCC's plans. In 2016, for example, Australia rejected the company's plan to acquire a local electric power company, citing national security reasons.