China's No. 1 property developer seeks growth in South Korea, US 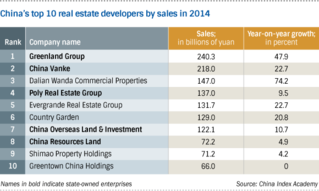 The twin-tower project in Sangam-dong, western Seoul, will cover a total area of 620,000 sq. meters. In addition to offices, commercial facilities and conference halls, the complex will also house hotels and furnished rental condominiums.

The Sangam-dong area is being developed as a hub for digital media businesses. It is a 20-minute drive from Gimpo International Airport, the main airport serving South Korea's capital.

Explaining its massive investment, Greenland said demand for office space and hotel rooms in Seoul will grow in coming years because Chinese exporters are expanding into South Korea and the number of Chinese visitors to the country is also on the rise.

The group launched another huge real estate development project in December, this one in Brooklyn, New York. It involves building 14 apartment buildings, hotels and commercial facilities and covers 64,500 sq. meters. Greenland agreed in 2013 to acquire a 70% stake in the residential portion of the Atlantic Yards project from Forest City Ratner.

Greenland started expanding its overseas investments around 2012. That year, the company embarked on building a resort complex complete with medical facilities on South Korea's Jeju Island, a popular destination for Chinese tourists.

Greenland is also involved in the development of commercial and residential properties in the U.K., Thailand and Australia.

In 2014, sales from its overseas businesses jumped fivefold from the previous year to 15.3 billion yuan. Its total sales, including those from domestic operations, surpassed 240 billion yuan for the year, making the company the largest property developer in China.

Greenland plans to continue beefing up its expansion outside China as it seeks to double its overseas sales in 2015 from the previous year.