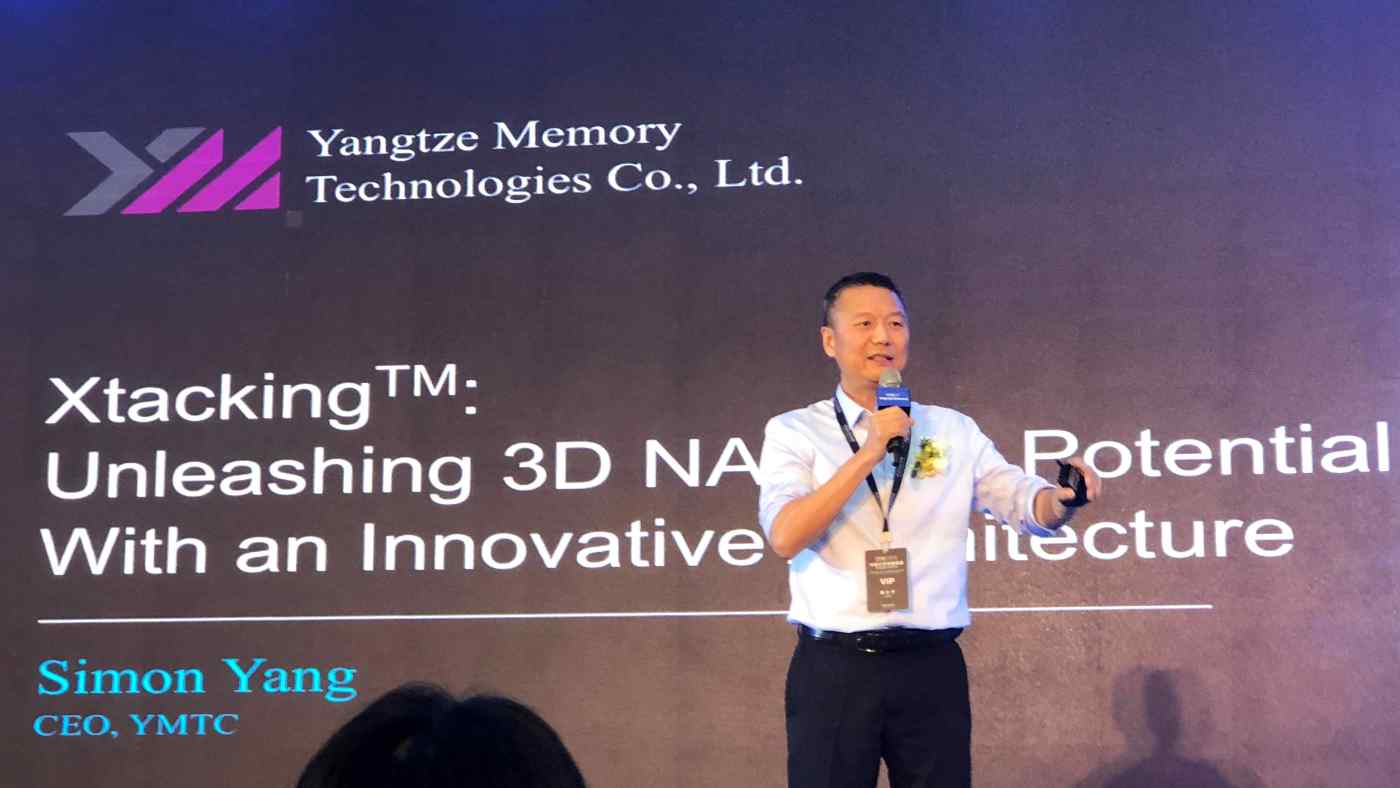 SHENZHEN -- The head of Yangtze Memory Technologies, China's answer to global memory chip leaders like Samsung Electronics and Toshiba, brushed off concerns Wednesday that his company's state-of-the-art plant slated to start production next year will upset the market's delicate supply and demand balance.

"We want to tell everyone that we are not here to crash the market, and we hope that the industry could be sustainable and healthy," CEO Simon Yang said at the China Flash Market Summit, a memory chip forum held here.

Yangtze Memory, an offshoot of Beijing-backed Tsinghua Unigroup, has become a potential national champion as China seeks to increase self-sufficiency in semiconductors as the top goal of its “Made in China 2025” strategic plan.

Yang's remarks come as trade tensions and a technological cold war between the U.S. and China continue to escalate. U.S. President Donald Trump set plans this week for a 10% tariff on an additional $200 billion in Chinese goods to take effect Sept. 24, prompting Beijing to retaliate with duties on $60 billion worth of American products.

Beyond tariffs, the Trump administration is reviewing whether to extend export controls on advanced semiconductor equipment and materials to curb the development of China's chip industry. Yangtze Memory and Semiconductor Manufacturing International Co., the country’s top contract chipmaker, could be targets of new U.S. measures, market watchers said, while they still heavily rely on production tools made by American suppliers such as Applied Materials and KLA-Tencor. Yang, when approached by Nikkei, declined comment on whether Washington-Beijing trade frictions are a concern for his company's development.

The company's rise has also sparked concern among leading memory suppliers including Samsung, South Korean peer SK Hynix, Japan's Toshiba and U.S.-based Micron Technology about whether a new player would disrupt the market.

Yang said his company "cares a lot about making profits" and will expand production capacity based only on market demand. It will never aim to flood the market with products, he said.

"We are no copycat, and we hope to bring innovations to the industry, too," the CEO said.

Yangtze Memory's potential customers include leading Chinese smartphone makers, such as Huawei Technologies, Oppo and Xiaomi, as well as domestic home appliance and carmakers such as Haier, Midea Group, Geely Automobile and BYD. They hope to cut reliance on U.S. chipmakers to hedge against supply risks arising from the trade war, according to industry sources. Meanwhile, Apple -- the world's biggest consumer of NAND flash memory chips -- also approached Yangtze Memory this year to learn their development status, the Nikkei Asian Review first reported in February. These electronics and car companies are major clients of existing memory chip suppliers.

Yangtze Memory is building a $24 billion plant in the Chinese city of Wuhan and plans to mass-produce the country's first 64-layer 3D NAND flash memory chips by the end of 2019. That would match the industry's current mainstream production technology for NAND, used in smartphones, memory cards and almost every other electronic device. NAND also serves as a vital component in data centers and in emerging fields like connected cars.

Memory chip prices are highly volatile, and a serious supply glut can drive weaker players to losses or even out of business. Beijing is pouring government funds into building its semiconductor industry -- a goal linked both to the country's "Made in China 2025" industrial plan as well as national security.

Showing off proprietary technology at a Silicon Valley event last month, Yangtze Memory unveiled a flash memory structure called Xtacking, a type of 3D NAND technology. The company claimed this structure would stand out among industry standards now. Industry watchers describe Xtacking as a breakthrough for a newcomer but still see challenges for the emerging Chinese chipmaker to put the design into mass production.

China has no presence in the supply side of the global NAND market, which is dominated by Samsung, SK Hynix, Western Digital, Micron and Intel.

Yangtze Memory employs around 3,500 people and looks to hire more talent worldwide. It has research and development centers not only in Beijing but also in Silicon Valley and Tokyo.