Retailers in Hong Kong have little knowledge of CR Beer. Instead, their shelves are lined with foreign brands such as Budweiser and Carlsberg.
DAISUKE HARASHIMA, Nikkei staff writerAugust 31, 2018 13:00 JST | China
CopyCopied

HONG KONG -- China Resources Beer is leveraging the marketing network of Heineken for an urgent campaign to develop foreign sales, as the state-run brewer confronts the threats of a shrinking Chinese market and its own weak brand power.

CR Beer intends to sell a premium version of its flagship Snow brand overseas in Asia and elsewhere, using the Dutch brewer's support to market a beer that represents China, CEO Hou Xiaohai said at an earnings briefing in Hong Kong on Aug. 17.

Snow ranks as the best-selling beer in the world by volume, having grown rapidly thanks to Chinese sales. But China's beer market has stayed flat at best since 2013, and CR Beer possesses far lower name recognition overseas than principal domestic rival Tsingtao Brewery -- making foreign expansion a challenge. 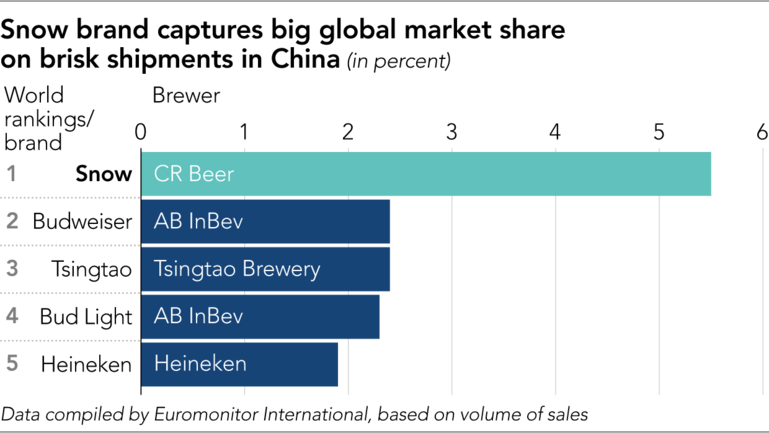 But this successful growth strategy is going awry as China's beer market shrinks and changes. Chinese consumers, especially young people, are demanding foreign-brand products, seeking a variety of tastes even at higher prices than domestic products. The "cheap" image of the Snow brand has solidified among these customers.

CR Beer has rushed to expand its lineup of premium products over the past several years while seeking partnerships with major overseas brewers. But the alliance with Heineken does not guarantee that CR Beer can compete in the global market.

The highest hurdle is the low name recognition of CR Beer and its Snow brand. Retailers in Hong Kong, which should be home to CR Beer, are full of foreign brands such as Budweiser and Carlsberg. Among Chinese brands, Tsingtao is virtually the only one visible on store shelves.

Though Snow ranks first among brands in China, it sells mainly on routes gained by CR Beer through acquisitions. Market shares of the brand therefore vary greatly depending on location. A sales assistant at a supermarket in Hong Kong said, "I don't know Snow."

Snow also has essentially no name recognition in Europe and Southeast Asia, markets CR Beer is preparing to enter. Overseas market conditions will not be especially hospitable. Though beer sales worldwide increased in 2017, they have remained almost level over the past five years. Increasing demand in emerging nations fueled by economic growth is balancing sales declines in developed countries driven by healthier lifestyles.

Roughly 30 years have passed since Japanese brewers advanced overseas, and their brands have become known to local consumers. CR Beer, a typical domestically oriented company, has lacked the brand, product and sales route to crack foreign markets until the Heineken deal.