PALO ALTO, U.S./GUANGZHOU -- Apple's guidance downgrade that rattled markets was prompted by its weak performance in China, as the world's biggest smartphone market becomes increasingly saturated and the country's economic slowdown drags down sales of the generally high-end iPhones.

The iPhone lineup, which provides around 60% of sales, delivered a weaker performance than expected, particularly the new XR model.

Trends in smartphone sales affect many companies, from assemblers and display suppliers to the makers of machine tools used in building the phones. Many of these are located in Asia, including Taiwan and Japan. The Silicon Valley giant's massive profile in the market also means a plunge in its stock prices will hit investors worldwide.

The Chinese smartphone market appears to be growing saturated, with sales on a downward trend since 2017. Shipments have shrunk year on year for six straight quarters through July-September 2018, when they declined 10.2%, according to U.S.-based research firm IDC.

Apple, with its high-priced lineup, probably suffered more than most from the slowing economy. The iPhone XR variant with 128 gigabytes of storage retails for 6,999 yuan ($1,018), while the latest devices from domestic competitors like Huawei Technologies can be had for around 3,000 yuan to 5,000 yuan. 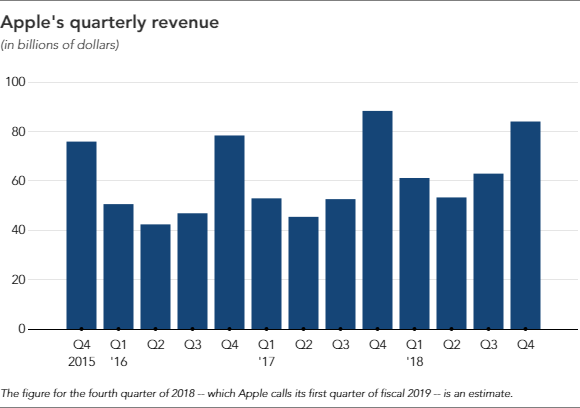 With Chinese consumers tightening their purse strings, there are more and more reports that "Apple's competitive power is weakening," in the words of an executive at a Taiwanese electronics company. The American company's market share has been dwindling as well.

Some reasons for Apple's slump are unique to the company, such as fewer customers upgrading to new iPhone models in developed economies. But in a letter to investors on Jan. 2, CEO Tim Cook cited factors in the Chinese economy for the disappointing performance.

"We believe the economic environment in China has been further impacted by rising trade tensions" with the U.S., he wrote, adding that "as the climate of mounting uncertainty weighed on financial markets, the effects appeared to reach consumers as well." That statement appeared to draw a reaction in a market already growing cautious over the state of the Chinese economy.

On the morning of Jan. 3, shares in the California, U.S.-based company fell 10% from their closing price on Jan. 2, the day Apple downgraded its revenue estimate for the October-December quarter to about $84 billion, roughly 6% to 10% below its initial outlook. It was an unusual move for a company that tends to forecast conservatively.

The slowdown for Apple and the broader smartphone market is already reaching Asian suppliers, with stock prices for relevant Taiwanese companies falling broadly on Jan. 3. Shares in Catcher Technology, which makes housings for iPhones, closed down roughly 6%, while those of key iPhone assembler Foxconn Technology Group -- which trades as Hon Hai Precision Industry -- shed nearly 2%.

Japanese companies are feeling the pain as well. Japan Display, which is undergoing restructuring after a long string of losses, makes the majority of its sales to Apple, including liquid crystal display panels for the iPhone XR. In November, the company downgraded its sales outlook for the year through March 2019, with President and Chief Operating Officer Yoshiyuki Tsukizaki saying it was "carefully ascertaining the magnitude of swings in the mobile business."

Order volumes from China of machine tools for electrical and precision machinery, a category that includes devices for making smartphones, plunged 90.6% year on year in November, according to the Japan Machine Tool Builders' Association.

Apple is among the world's top companies by market capitalization, though it ended 2018 down at about $750 billion, having fallen from its peak of over $1 trillion that year. Its shares are held by investors ranging from public annuities to hedge funds, and a fall in its stock price directly affects their portfolios' performance. With concerns building over a possible global economic slowdown, Apple's troubles may drive investors further into risk-off mode.