DENPASAR, Indonesia -- Strong growth in gas demand from China is set to trigger a new round of major investment in Papua New Guinea, which urgently needs a financial boost.

ExxonMobil of the U.S. and Total of France, two oil supermajors, along with Oil Search of Australia, are likely to give the go-ahead by next year for more than $6 billion-worth of additional liquefied natural gas export capacity in the resource-rich South Pacific nation.

That investment would come after China surpassed South Korea in 2017 to become the world's second-largest importer of the fuel behind Japan. Analysts expect the greater-than-expected gas demand growth to expand global LNG production, bolstering prospects for cash-strapped but gas-rich Papua New Guinea.

Total, on behalf of partners ExxonMobil and Oil Search, controls the undeveloped Elk-Antelope gas fields project in Papua New Guinea's southern Gulf Province, which will fuel the country's export expansion. It is expected that Elk-Antelope, instead of being a standalone export facility, will be integrated with the existing ExxonMobil-operated export plant, a development known as PNG LNG, as part of a cooperative approach to save costs, said Chris Meredith, a senior upstream analyst at Wood Mackenzie.

The U.K.-based energy research company estimates that capital spending to develop the Elk-Antelope fields will be $6.1 billion, which would cover the upstream development of gas and additional production capacity at PNG LNG to process it. 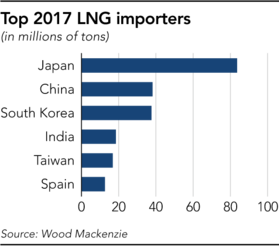 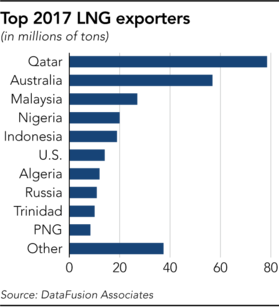 Elsewhere in Papua New Guinea, ExxonMobil, along with its joint venture partners, Oil Search and Japan's JXTG Holdings, has found more gas at its P'nyang field in the Highlands, a mountain range that runs through the country, which could be used to underpin an additional expansion of ExxonMobil's 6.9 million tons per year PNG LNG export plant that already has two processing trains to liquefy gas.

ExxonMobil and Oil Search hope to add at least one additional production train at PNG LNG using gas from the P'nyang field. Analysts estimate capital spending for this expansion, which might not receive final approval until 2021, at $2 billion to $2.5 billion.

Papua New Guinea's total proven gas reserves stood at 7.4 trillion cubic feet at the end of 2016, far less than Australia's 122.6 trillion cubic feet. But some analysts estimate that Papua New Guinea's gas resources are enough to support expansion of export capacity from 6.9 million tons per year now to as much as 20 million tons per year within the next decade, although much more appraisal drilling needs to be done.

Papua New Guinea, already the fourth-largest Asia-Pacific LNG exporter, is becoming an exploration hotspot. Between 65 and 70 exploration permits are active in Papua New Guinea, and there are at least as many active applications. However, explorers are not just tapping the Papuan Basin in the jungles of the Highlands. The Western and Gulf provinces are receiving more attention, as are shallow and deep-water acreage in the Gulf of Papua. ExxonMobil and Total have both rushed to snap up deep-water acreage, too.

China, South Korea and India are driving global LNG demand, which is expected to absorb oversupplies in the market by the early to mid-2020s, according to research firm Bernstein. Given the five-year lead time for new production capacity to be built, approvals for new projects are needed soon. Bernstein expects buyers, whose commitments help underpin finance for projects, will have to begin committing to new supplies this year.

"Only one new project was sanctioned in 2017 and we desperately need more projects to reach a final investment decision to help meet the post-2020 shortfall," said Tony Regan, managing director of Singapore-based LNG consultancy DataFusion Associates.

Bernstein believes that projects in Qatar and Papua New Guinea, which have the lowest costs of new supply, have the best chance of moving forward, followed by proposals in the U.S.

Others believe it is too soon to say whether China's heavy demand for LNG will trigger the start of a new expansion cycle in the industry as early as this year. "What many planned projects need is buyers to commit to purchase LNG on a long-term basis, and there is little evidence as yet that this is happening," said Andy Flower, an independent LNG consultant.

"Buyers in China are probably waiting to see more evidence that the growth in demand for LNG will continue," he said.

However, just last week, U.S.-based Cheniere Energy announced the first long-term contract to export LNG to China. China National Petroleum Corp., or CNPC, will purchase roughly 1.2 million tons of LNG a year through 2043, with a portion beginning this year and the balance starting in 2023.

A large part of China's surplus demand last year was filled by Qatar through fresh sales and even tweaks to existing long-term contracts. But Qatar, the world's biggest LNG exporter, has all but sold out of winter supply after committing spare output to China and South Korea, a development that could tighten Asia's gas markets, traders have warned.

Beijing expects demand to rise 8% in 2018 over last year to 41 million tons, as the country continues to pursue its coal-to-gas shift in an effort to eliminate the toxic smog that often covers many of its cities.

China's demand for LNG must have given the sponsors of new liquefaction capacity, including those in Papua New Guinea, increased hope there will be demand for their planned output, Flower said.

China's own gas output rose 8.5% last year, according to data released this month. This year, China will boost its LNG import capacity to 62.4 million tons per year from 56.4 million tons per year in 2017, as national oil company China Petroleum & Chemical, known as Sinopec, opens a new terminal in the northeastern city of Tianjin and private gas distributor ENN Energy commissions a new facility in the eastern city of Zhoushan. China will overtake Japan as the world's largest importer within 10 years, according to Bernstein.

However, Regan of DataFusion Associates agreed that there would still be a fairly low level of buyer interest in signing long-term supply deals that new LNG export schemes need to go ahead. Instead, project sponsors might have to develop merchant plants, thereby taking the risk of proceeding without long-term off-take agreements, he said.

"Owners will have to put more equity into the project, but this may suit the big guys like Shell, ExxonMobil and Qatar Petroleum. They can afford to take the risks and it will kill off the weaker projects," Regan said.

Flower, the independent consultant, said ExxonMobil and Total have the financial might to invest in new capacity in Papua New Guinea using equity. However, Oil Search, energy company Santos, also of Australia, and the Papua New Guinea government, all co-owners in the PNG LNG export plant, would probably prefer to raise project finance, he said.

Nevertheless, strong LNG demand should translate into more exports from Papua New Guinea, which would bolster government coffers. The country racked up record debts after it overspent several years prior to 2014 on the basis that its maiden LNG export plant would provide large revenues. But that never happened, as global oil prices, to which LNG sales are indexed, collapsed in 2014, the same year the ExxonMobil-led plant began operating.