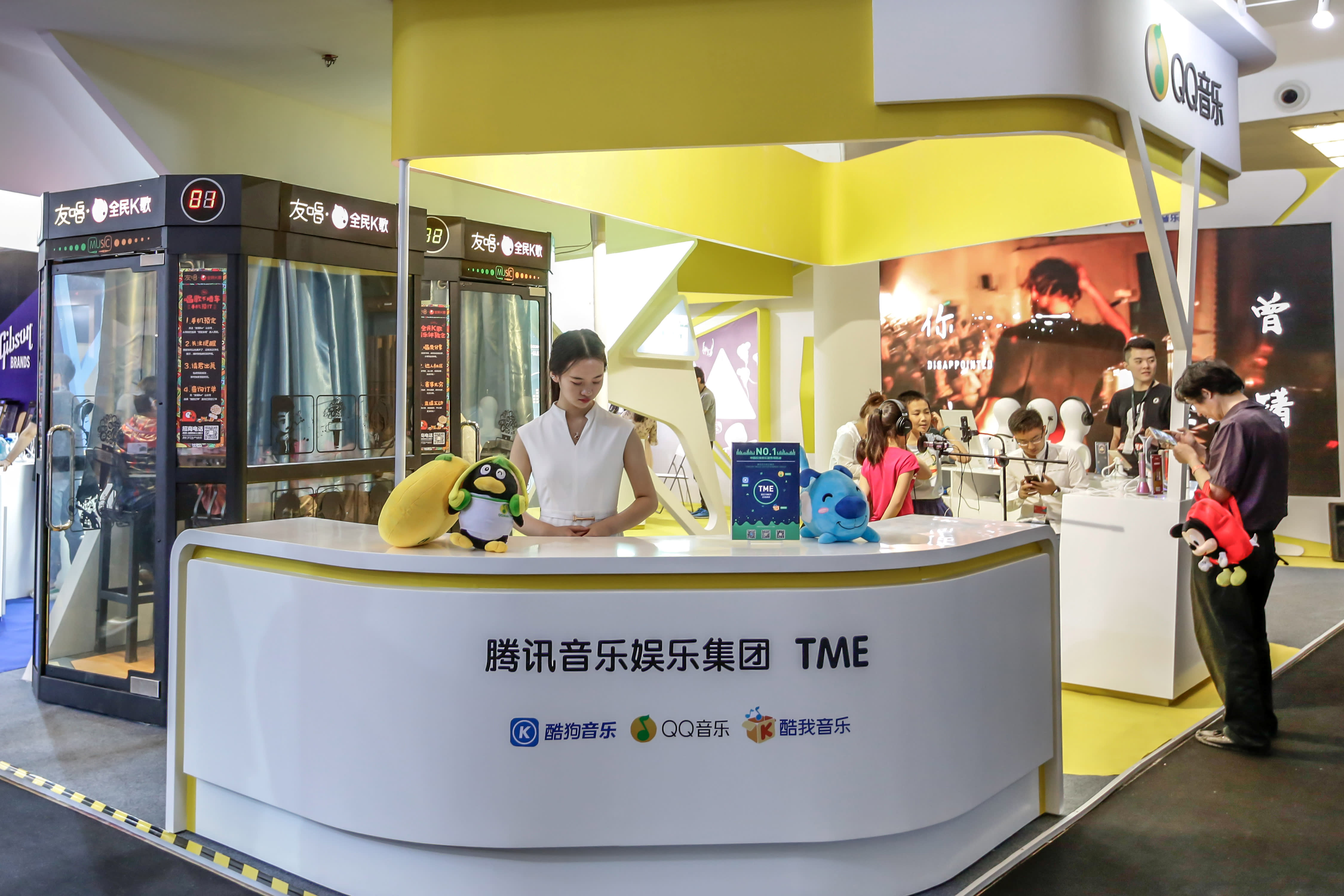 HONG KONG -- When Spotify held its initial public offering in New York in April, the Swedish music streaming platform's shares closed about 10% down on their first day. As Tencent Music Entertainment prepares for its market debut on Wednesday, some analysts worry that China's answer to Spotify may suffer a similar fate.

Tencent Music, a spinoff of Shenzhen-based tech giant Tencent Holdings, hopes to raise up to $1.2 billion through its IPO on the New York Stock Exchange, according to its filing with the U.S. Securities and Exchange Commission.

While that figure is smaller than earlier, unconfirmed reports of a $2 billion fundraising target, it would still be one of the largest IPOs by a Chinese company in the U.S. this year, trailing only the $2.4 billion raised by video streaming site iQiyi and the $1.6 billion IPO of Pinduoduo, China's third-largest online retailer.

Tencent Music runs three major streaming apps -- QQ Music, Kugou and Kuwo -- and also operates a popular karaoke app called WeSing. Unlike Spotify, which has yet to break even, the Chinese company is already profitable, thanks to its ability to make money from its so-called music socializing service. Whenever WeSing users buy each other virtual gifts, for instance, Tencent earns a commission.

For the nine months ended Sept. 30, Tencent Music had a profit of a $394 million on sales of nearly $2 billion. Its revenue jumped 83% on the year.

But the timing of Tencent Music's IPO is awkward: One of its early investors is filing investigation requests against the company. Last week, Chinese investor Hanwei Guo accused Tencent Music of using misinformation, threats, and intimidation to force him to sell his equity stake. However, the dispute may not have an immediate impact on the shares' performance. "The [trading] volume is still quite small. For now, [the stock] would be affected mostly by market sentiment," said Harry Yuen, an associate director of Oceanwide Securities in Hong Kong.

A successful first day matters as the parent company struggles to ease investor jitters. Tencent's shares have tumbled by about a third since January, and in August the group announced its first quarterly profit decline in 13 years. Despite stronger earnings in the July to September quarter, the company has not been able to cash in on some of its most successful game titles in China due to a monthslong freeze on government approvals. Tencent Music's trading debut may only lead to more disappointment, analysts warn.

"Given the current market sentiment, most U.S.-listed companies have not performed well, and Tencent Music is unlikely to be an exception," said Martin Bao, an analyst in Hong Kong with ICBC International. On Monday, the NYSE Composite Index was down about 5% from a week earlier, when a trade truce between Beijing and Washington resulted in a short-lived rally. The Nasdaq Composite Index slid roughly 6% during the same period.

Tencent Music reportedly postponed its IPO filing in October, trying to avoid the market turmoil. "But Tencent Music simply cannot wait any longer," Bao said, adding that "U.S. stock markets are expected to enter bear territory next year" as a result of a cooling economy and concerns over the persistent trade conflict.

Analysts also point to longer-term issues. "The biggest challenge facing Tencent Music is fierce competition," said Oceanwide Securities' Yuen. "China's online music market is only big enough to host a few front-runners. If you are not No. 1 or No. 2 in the sector, then you won't make it," he added.

For now, Tencent Music leads the pack, with a total of 800 million monthly users across multiple apps. But its rivals are catching up. NetEase Cloud Music, which raised $600 million from investors in November, including Chinese search titan Baidu, added nearly 550,000 new listeners every day over the past 12 months alone. The chief competitor of Tencent Music claims to have more than 600 million users.

Meanwhile, video streaming websites are vying for attention. In December 2017, the number of Chinese music app users fell by 11 million compared with January the same year, as more people began watching video clips, according to market researcher QuestMobile. And of Tencent Music's 800 million users, only 24.9 million, or about 3%, are paying members.