TOKYO -- Yamaha Motor will step up marketing of its Fazer unmanned helicopter released in 2013 for agricultural and other business use. 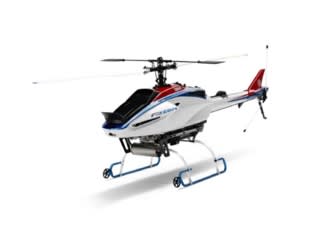 The company will begin exporting the Fazer to South Korea in 2015, in a bid to stimulate replacement demand from its predecessor model RMAX, which was put on the market there in 2003. The previous drone has been used primarily to spray agricultural chemicals and anti-foot-and-mouth solutions.

The Fazer is 3.6 meters long and weighs about 70kg, small enough to be carried on a light truck. Its loading capacity is 50% larger than the RMAX.

In Japan, Yamaha will supply the Fazer to agricultural equipment maker Yanmar, which will sell it under its brand. Yamaha-made unmanned helicopters have been used mainly for rice cultivation in Japan. The company aims to sell the Fazer to soybean, wheat and other agricultural growers.

Yamaha has developed a special device so that the Fazer can be used to spray rice seeds directly over paddies. It will promote the Fazer as it expects large-scale farming operations to increase in light of growing moves toward agricultural consolidation in Japan. It hopes to boost annual sales of the Fazer to 300 units in 2015, from 160 at present.

Unmanned helicopters are priced at more than 10 million yen ($90,629) each, and licenses are required to operate them. Yamaha will therefore carry out helicopter-based agricultural work on behalf of farmers through sales agents, offering operations such as direct seeding and spraying of herbicides.

Yamaha is targeting 5 billion yen in sales of its drone by the end of 2015, up 10% from the current amount. The company began selling unmanned helicopters in 1987. Its machines are small and easy-to-operate, capable of accurately spraying agricultural chemicals from a relatively low altitude of 3 to 4 meters.

Its helicopters are currently used for an estimated one-third of pesticide spraying on Japanese rice.