JAKARTA -- Indonesia saw a jump in commercial vehicle sales last year as the government's push for infrastructure and tourism development lifted demand, as did a recovery in resource prices.

The Indonesia International Commercial Vehicle Expo, the country's first trade fair for the category, opened here Thursday, drawing about 30 exhibitors, including such Japanese companies as Toyota Motor and Hino Motors and Mitsubishi Fuso Truck and Bus, and its German parent, Daimler.

Transportation industry insiders flocked to the displays of trucks and other vehicles. Yohannes Nangoi, chairman of the expo organizer, the Association of Indonesian Automotive Industries, said commercial vehicles sales probably will continue to push overall auto sales in 2018 and beyond.

Combined sales of commercial vehicles and construction machinery increased 18% on the year in 2017 to around 240,000 units, with truck sales soaring more than 40%.

Production of construction machinery such as dump trucks and excavators probably exceeded forecasts by nearly 30% last year, reaching 5,900 units, according to an industry group. Demand may hit a record 10,000 this year, some project. One of three major factors driving the market is the massive infrastructure development initiative of President Joko Widodo's government. The program, estimated to cost around 5 quadrillion rupiah ($363 billion), aims to build roads, bridges, railways, ports, airports and power plants across the country. Highways totaling about 1,000km are to be built by 2019, with around 560km completed so far.

There are no signs of momentum slowing as more projects take shape, such as a highway to connect the northern and southern parts of the Sumatra island, said an executive of a major construction company.

The second big impetus is tourism promotion. Foreign visitors increased 21% on the year last year to around 14 million, and the government hopes to bring the count to 20 million yearly by 2019. Widodo's vision of 10 tourism hubs outside of Bali, his "New Balis" strategy, calls for construction of airports and ports.

The third driver is a recovery in resource prices after a few years of decline from 2012-2013 peaks. Indonesia's coal output grew 7% last year.

Currently, the Indonesian market for commercial vehicles ranks between Nos. 10 and 20 in the world. But the population of over 260 million is the fourth-largest, and the biggest in Southeast Asia. The economy is expected to maintain robust growth of 5.3% this year, according to the World Bank projection. So the market could grow to 500,000 or 1 million units in the coming years. 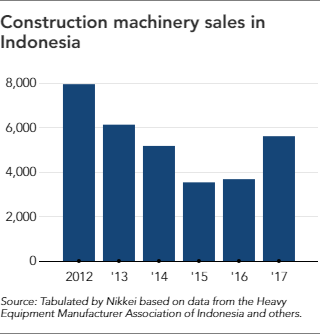 Auto manufacturers around the world are scrambling to jump on this opportunity. In January, Daimler created  Daimler Commercial Vehicles Indonesia to produce and sell large trucks and other vehicles. Markus Villinger, CEO of the local unit, expressed hopes for further market expansion, highlighting the remarkable growth of the logistics network and infrastructure in the country.

At the expo, Mitsubishi Fuso Truck and Bus showcased its new Fighter medium-duty truck, an example of its expanded lineup. Volvo will supply buses to the transit system in the capital, and Tata Motors of India released a compact bus last year.

Japanese automakers dominate Indonesia's passenger vehicle market with a collective market share exceeding 90%. Their competitors are therefore focusing on the commercial segment to ride its expansion.