Pandemic lowers acquisition costs and highlights benefit of being a conglomerate

TOKYO -- Sony's late co-founder Akio Morita was a visionary. Among his many visions, one that was very dear to him was creating a financial unit. He finally realized what he had once called his "30-year dream" when Sony set up a life insurance venture with a U.S. company in the late 1970s.

The venture became the core unit of Sony's financial business, which contributed greatly to group earnings. But it was later spun off as non-core and remained a separate listed entity until Sony recently decided to reacquire it after the coronavirus pandemic transformed its business environment.

"I already had an idea for a financial institution when the company's name was changed to Sony in 1958," Morita once said. "Having a financial unit will be important to us not only as a means of raising funds but also in terms of maintaining credit standing and operational balance. I want to create a new corporate group with a financial arm."

Thus, back when he was selling transistor radios in the U.S. in the late 1950s, Morita vowed to launch a financial business in Japan, looking up at the soaring One Prudential Plaza building in Chicago. Sony partnered with Prudential to launch a life insurance joint venture in Japan in 1979. There were many skeptics, but Morita was bullish: "The first 10 years of the life insurance business will be its early investment period. It may be in 20 years' time that the business will bear fruit," he said.

Co-founder Masaru Ibuka was also pleased with Sony's entry into the new sector, saying it meant that the company could leave a legacy to the next generation. 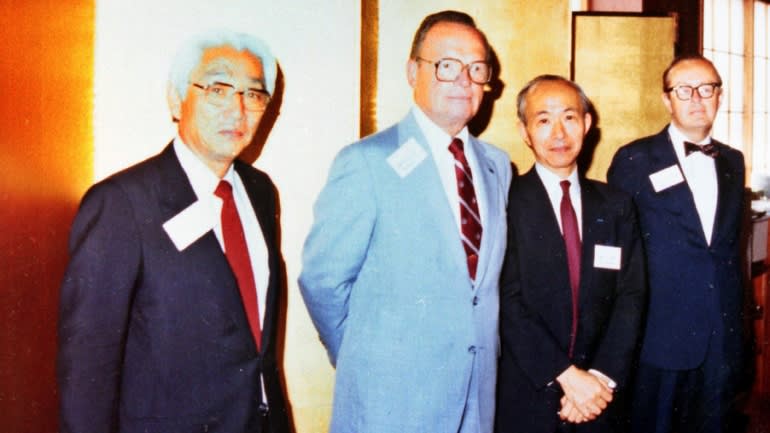 Akio Morita, far left, and top officials of Prudential pose for a photo after Sony entered the life insurance business in Japan through its joint venture with the U.S. company in 1979.

Morita's prediction proved true. Sony's financial units, including Sony Life Insurance, became a stable revenue source that supported the company's consolidated earnings. But Sony's strategy toward the business began to shift after earnings at its mainstay electronics business deteriorated in the 2000s.

When Howard Stringer was CEO, Sony positioned its financial business as non-core and listed key finance unit Sony Financial Holdings in 2007. Sony earned about 300 billion yen ($2.8 billion) by selling an approximate 30% stake in the company.

After Kazuo Hirai became CEO in 2012, the company tried to turn Sony Financial Holdings into a wholly owned subsidiary in an effort to take back profits that flow to minority shareholders and save on taxes. But the plan did not materialize as the company decided to focus on turning around its electronics business.

Kenichiro Yoshida, who became CEO in 2018, decided to go ahead and make Sony Financial Holdings a wholly owned subsidiary. "Sales activities by life planners [at Sony Life Insurance] are the origin of Sony's DTC (direct-to-consumer) service," he emphasized at a corporate strategy briefing in May 2018.

Yoshida positioned the financial business as a core entity as the company is trying to shift from simply selling products and services to a "recurring" business, in which it will earn profits from consumers on an ongoing basis.

He had stressed the importance of a direct-to-consumer finance model since returning to Sony's boardroom in the winter of 2013. Shigeru Ishii, who founded Sony Bank with Hiroki Totoki, became president of Sony Financial in 2016. Totoki serves as CFO under Yoshida.

Sony's efforts to turn Sony Financial Holdings into a wholly owned unit seemed to proceed smoothly, after the company bought additional shares in it in 2016 and 2018. Sony's ownership steadily rose from 60% to 65.06%.

But U.S. hedge fund Third Point got in the way. Last year, the New York-based company pressured Sony to sell its financial arm. The emergence of an activist fund that sees a conglomerate as an enemy cast a dark shadow over the financial arm's return to the parent company.

Then, under such circumstances, came the coronavirus crisis which, in reality, has brought two opportunities for Sony. First of all, the share price of Sony Financial Holdings has declined, meaning acquisition costs are much reduced. And secondly, the rationale for making it a wholly owned subsidiary has grown more compelling. Sony CEO Kenichiro Yoshida has long considered the financial business as a core entity. “Sales activities by life planners [at Sony Life Insurance] are the origin of Sony’s DTC (direct-to-consumer) service,” he said.

Yoshida cites geopolitical factors as a reason for Sony's decision to make Sony Financial a wholly owned unit. "Our financial business has a stable operational base in Japan," he said. "Amid rising geopolitical risks, it helps stabilize management at a global company."

As movements of people and goods have declined around the world due to the pandemic and concerns grow over a rising tide of protectionism, Yoshida believes that there is a "conglomerate premium" in running the financial business as it helps reduce such global risks.

Furthermore, immediately after deciding to make the financial business a wholly owned subsidiary, Yoshida embarked on a group reorganization. He has expressed an intention to clarify the division of labor between headquarters and other operations as well as to pursue management stability as a conglomerate while seeking synergies among various units.

"Times will change due to the scourge of the coronavirus and U.S.-China frictions," said Hideki Wakabayashi, a professor at Tokyo University of Science's Graduate School of Management who specializes in technology management.

"Companies have so far pursued too much management efficiency," Wakabayashi said. "The era of selection and concentration will soon come to an end and a new era will begin when businesses pursue stability rather than efficiency. They need to rebuild business portfolios with a greater focus on stability than capital efficiency."

While many corporate leaders are becoming cautious amid growing uncertainty brought about by the coronavirus, Yoshida presents a long-term vision and is boldly dealing with long-standing issues.

Yoshida once preached about the mental attitude of corporate leaders. "Top management has only three jobs: setting a direction, taking responsibility and making personnel changes," he said. "Everything else should be left to others."

Now, Yoshida has put his pet theory into practice. Will Sony turn the curse of the coronavirus into a blessing? It depends on whether the company can get things right after the return of its devoted "daughter" to the house where she was born.