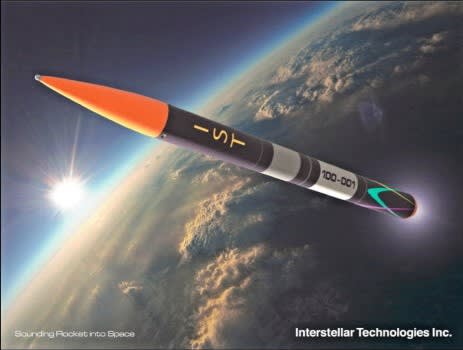 TOKYO -- Interstellar Technologies will attempt to launch a privately developed rocket into space on July 29, aiming to become the first Japanese company to do so successfully.

The venture announced plans Thursday to launch its first rocket, the Momo, from the northern island of Hokkaido in a window that starts at 10:20 a.m. JST. The company was founded in 2013 by Takafumi Horie, the maverick entrepreneur known for an accounting scandal during his time as president of internet portal operator Livedoor. The Momo is 10 meters tall and weighs about 1.1 tons. The rocket is to take a suborbital flight path, launching into space for just a few seconds at 100km altitude and falling back to earth. The rocket is supposed to land in the Pacific Ocean from its launch site in Taiki, a town on Hokkaido's southeastern coast where the company is headquartered. "We will work meticulously up through the launch," said CEO Takahiro Inagawa.

Since the Momo uses independent technology and widely available parts, the cost of the launch will be held to less than 50 million yen ($441,700). The rocket could be used for scientific experiments at microgravity and more. Interstellar Technologies plans on developing a rocket than can carry a small satellite as soon as 2020.

"The next main business is launching a satellite," said Inagawa. "I want to make that step."