Sumitomo-UnionPay partnership to establish customer base 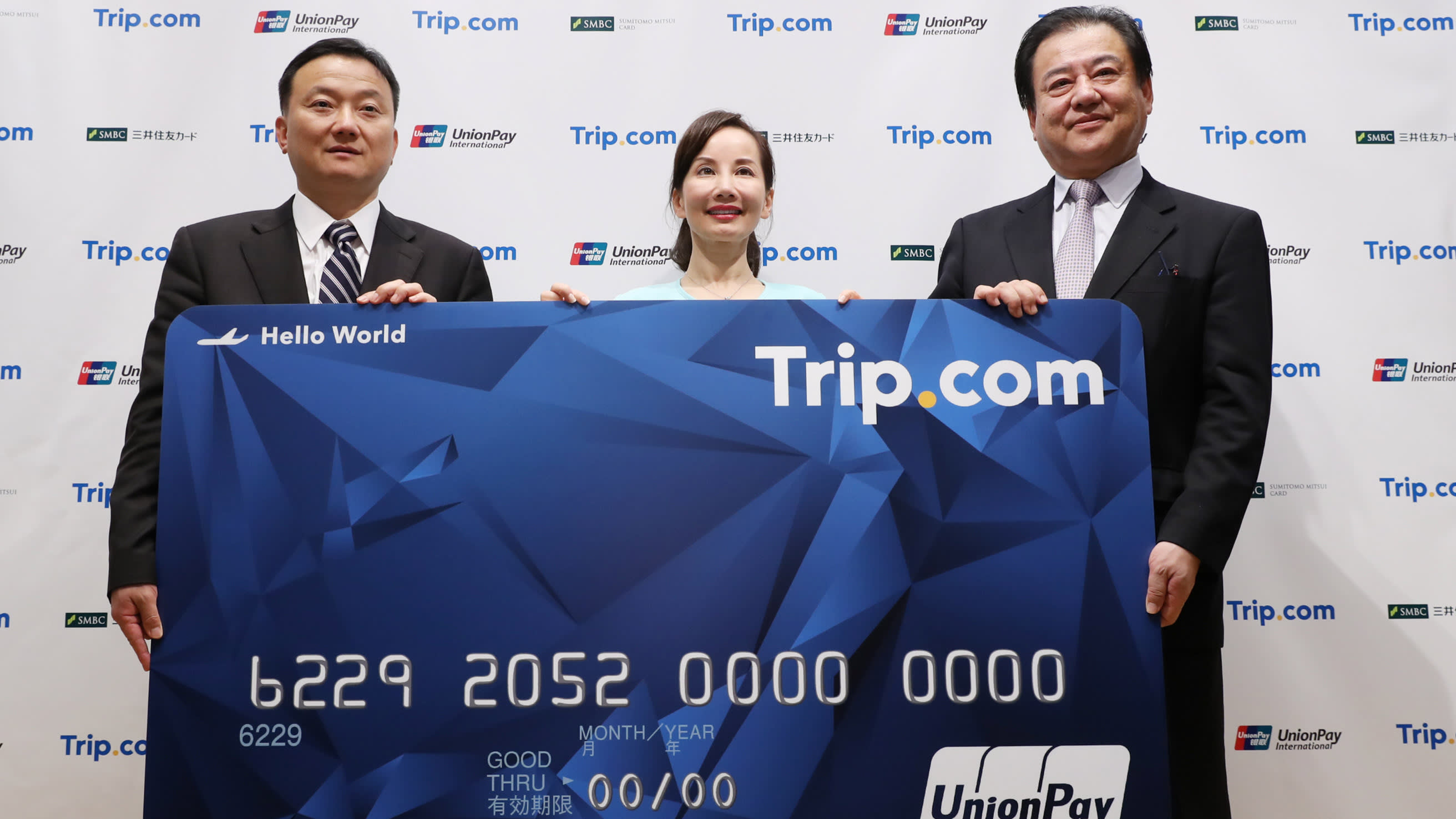 Ctrip CEO Jane Sun, center, poses for photos at a news conference in Tokyo on May 15. The Trip.com Global Card will be the company's first credit card outside of China. (Photo by Kosaku Mimura)

TOKYO -- Chinese travel giant Ctrip.com International has made a significant foray into the market for Japanese tourists with the launch of its first credit card outside its home market.

The Trip.com Global Card will be provided in partnership with China's UnionPay International and Sumitomo Mitsui Card Company, one of Japan's largest credit card providers.

At a news conference on Tuesday, Ctrip CEO Jane Sun said the company aimed to "provide travel merchandise on a global scale."

The card will be available from June 6 under the UnionPay brand, and will offer discounts on hotel reservations and other benefits via Trip.com, the company's global site. Sun expects "more than one million cards to be issued" in the coming years.

Travel agency JTB claims the number of Japanese tourists visiting foreign countries in 2018 will increase to up to 18.2 million, just below the highest number recorded in 2012.

According to industry research company Phocuswright, Japan's market for online travel agencies is expected to grow by 15% a year until 2020, due to a recovery in the industry and the rise of low cost carriers.

"Inbound tourists to Japan exceeded outbound tourists in 2015, but the numbers traveling abroad has not decreased," said Ken Kubo, President of Sumitomo Mitsui Card. "We can support Japanese travelers with tools like these credit cards."

Ctrip has had an office in Tokyo since 2014, but its focus primarily been on Chinese customers visiting Japan. During that period it has built up alliances with accommodation providers, airlines and other related companies.

Last year, Trip.com was made available in the country, but the launch of the credit card marks the company's first significant push into the Japanese tourist market.

"It is now time to provide our services to Japanese customers," said Sun. The company plans to establish a customer base by drawing people in with the card.

"China is growing rapidly, but Japan is stable and GDP per capita is still high," she added. Sun also expressed a desire to form partnerships with Japanese travel agencies "to send tourists between the two countries."

However, Ctrip's main business driver will remain the inbound tourist market. Japan has been attracting increasing numbers of foreign tourists in recent years. In 2017, the country welcomed 28.7 million visitors, 19.3% more than 2016. According to JTB, 32 million people are expected to visit the country in 2018, and the number is seen rising to 40 million in 2020, when Tokyo hosts the Olympic Games.

Chinese tourists to Japan increased by 15% in 2017 compared with the previous year, making up 26% of the total number of people traveling to the country.

"The increase of Chinese tourists will continue along with the rise of people traveling independently," said Sun.

"Less than 10% of the population has a passport, but since traveling is popular with young people, the proportion will grow to 50% in about 10 years."

Ctrip controls more than 65% of China's online travel market, with nearly half of its customers traveling in groups. Increasing numbers of independent tourists provide room for further growth in its domestic market.

In contrast to its dominant position at home, Ctrip faces considerable competition in Japan.