Deja vu at Sony with activist Loeb back in the picture

Pressure mounts on Sony to brush up its struggling movie business 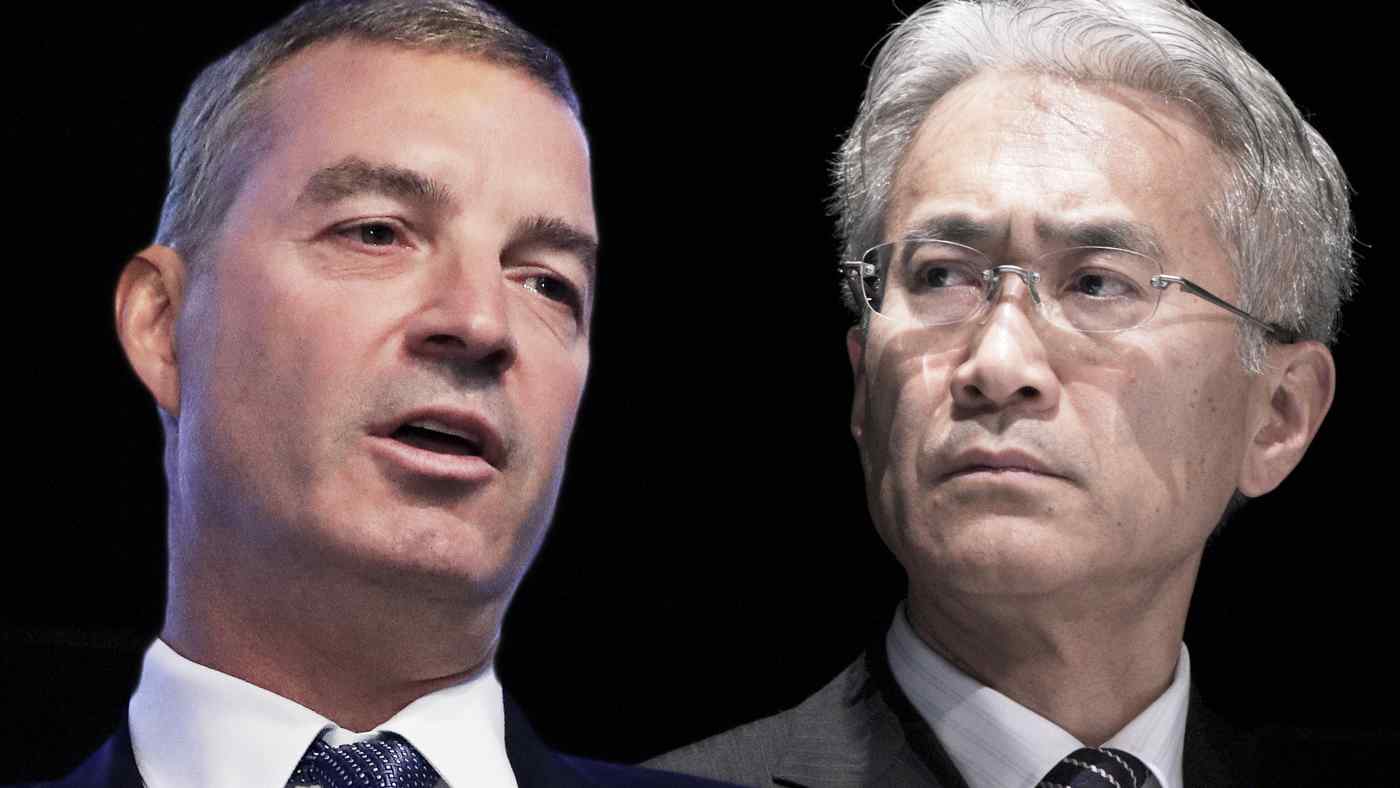 Investors will want to know how Sony President Kenichiro Yoshida intends to deal with  Daniel Loeb, who has once again built up a stake in the company. (AP/Reuters)
JADA NAGUMO, Nikkei staff writerMay 20, 2019 18:22 JST | Japan
CopyCopied

TOKYO -- When Sony President Kenichiro Yoshida faces investors on Tuesday to outline the electronics conglomerate's management strategy for the next two years, one question will be foremost: What does Daniel Loeb want?

Last Wednesday, Loeb's activist fund Third Point revealed through SEC filings that it had acquired about $63 million of Sony's American Depositary Receipts during the three months through March 2019.

The last time Loeb rattled Sony's cage was in 2013, when he pushed the company to partially spin off its entertainment division.

Sony rejected that idea, but did agree to increase sales disclosure, including providing box office receipts for individual films. When Loeb walked away the following year, his firm pocketed a gain of nearly 20%.

But since the news broke last month that Loeb was building another stake in Sony -- sending the shares up 9% on the Tokyo Stock Exchange -- speculation has it that the investor is again focusing on the movie business, which has consistently failed to lift profit rates above 10%. Major U.S. competitors have been posting much more impressive figures, with Walt Disney knocking out numbers close to 30% and Time Warner well above 10%.

"From this profit rate, it is hard to say that Sony's movie business is doing well," said Yoshiharu Izumi, a senior analyst at SBI Securities.

The reason, says Izumi, who has covered the electronics industry for more than 20 years, is simple: too few hit films and poor cost control.

"Disney has 11 films in the all-time top 20 for worldwide box office grosses," he said, based on data as of the end of February. "Warner has two, Universal has five, Fox and Paramount Pictures has one. Sony has zero."

Disney also has three of the four highest grossing films ever, including "Star Wars: The Force Awakens" and its latest blockbuster "Avengers: Endgame," which has taken in over $2.6 billion since its release last month and could soon replace 20th Century Fox's "Avatar" as the highest grossing film ever. Meanwhile Sony's top box office hit remains 2012's "Skyfall," which sits at #24 in the global rankings. Releasing 27 films last year compared to 13 from Disney, Sony's crowded schedule also has not helped, hampering the studio's ability to roll out the kind of polished marketing campaigns that have become so crucial to driving ticket sales. Disney's average box office revenue per film last year came to $238 million -- almost five times that of Sony's.

The movie industry is also up against a whirlwind of changes: Disney recently closed its merger deal with entertainment giant Fox, while in 2018, AT&T acquired Time Warner.

"In terms of scale, the current realignment has widened the gap between Sony and the largest players," said Mika Nishimura, a research analyst at Credit Suisse, in a report dated April 9.

Add to that the looming threat posed by streaming services such as Netflix, Hulu, and Amazon -- which Apple and Disney are also betting big on -- and Third Point has plenty of reasons to back any possible proposal for Sony to sell off its movie business.

"It can be said that Third Point was not wrong about their claims [in 2013], given that Sony's movie production business is still not generating enough profit and had to be shored up," said Yasuo Nakane, a senior analyst at Mizuho Securities.

But it is unlikely that Sony will want to sell its movie business. A major task facing management, then, will be to convince investors that movies remain essential to improving the company's value, and to explain the strategies they are going to implement going forward and how movies will contribute to growth.

The most obvious rebuttal to calls for Sony to exit the film business will be some of the recent synergies created between its movie, hardware and gaming businesses, such as "Marvel's Spider-Man," a PlayStation 4 game that leveraged Sony's movie content and became a smash hit last year.

"Marvel's Spider-Man finished as the best performing superhero game in almost 15 years," noted Mat Piscatella, an analyst at U.S. market research company NPD Group, in a comment on Twitter in January. "What Insomniac and Sony achieved with this game is absolutely incredible."

According to Credit Suisse's Nishimura, Sony is continuing to strengthen its ties with content creators and artists while leveraging the latest hardware technologies.

"Even if Sony receives outside proposals similar to last time, we doubt it will spin off the entertainment business," Nishimura said.

Other analysts praised Tom Rothman, who became chairman of Sony Pictures Entertainment's Motion Picture Group in 2015, and Anthony Vinciquerra, who became CEO of SPE in 2017.

After Sony's net profits fell 50% to 73 billion yen ($665 million) due to heavy losses in the movie business in 2017, which covers film, television production and media networks, the success of "Jumanji" helped Rothman deliver record profits in Sony's movie division the following year.

With further structural reforms going forward, and its advantages as an independent movie company, "Sony can easily form tie-ups in various areas, leveraging its gaming platforms and content," Nishimura said. 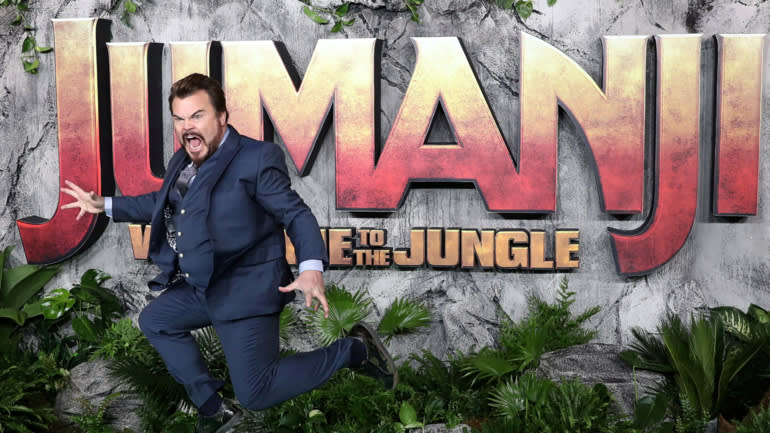 Actor Jack Black arrives for the  U.K. premiere of "Jumanji: Welcome to the Jungle" in 2017. The film helped turn around the fortunes of Sony's movie division.   © Reuters

SBI's Izumi also suggested that Sony will be able to offer its movie content on any streaming service platform unlike Disney, whose decision to launch its own streaming service will inevitably limit its availability.

Sony shares have been trading below 6,000 yen, down 15% since last September when it hit an 11-year high, and both analysts and investors agree that Sony's stock is undervalued.

Masaru Sugiyama, an analyst at Goldman Sachs, puts the 12-month target price at 8,400 yen, an upside of more than 40%.

"Sony's movie business is being mispriced. The last two years have shown us to be in a recovery period with new management coming in and a core strategy focused on [intellectual property] content."

Oasis Management, another activist fund that has been a longtime Sony shareholder, also remains upbeat about the company's prospects.

"We continue to believe Sony is undervalued," said Oasis Chief Investment Officer Seth Fischer. "We agree with management and other shareholders that the public markets do not appreciate the full value of the world class content assets, in addition to the significant increase in earnings and operating margins under Yoshida's leadership as CFO and now CEO."

Nakane puts Sony's current target price at 8,400 yen. In his March report, he calculated that Sony's movie business has a value of about 700 billion to 800 billion yen, with an EBITDA of 77.2 billion yen and an enterprise value-to-EBITDA ratio of 9.1 to 10.1.

"Compared to its other businesses like games or music, its value is relatively low," Nakane noted.

Third Point may not be able to persuade Sony to turn its back on Hollywood, but its renewed pressure on the company could yet encourage it to be more proactive about its engagement with the market.