'Donki' to bring ceiling to floor mega discounts to Asia Products seem to spill out of Don Quijote outlets, like this one in Tokyo.
ALEXANDER MARTIN, Nikkei staff writerJune 7, 2017 15:00 JST | Japan
CopyCopied

TOKYO -- Don Quijote, a chain of neon-lit emporiums filled ceiling to floor with discounted goods, is opening its first store in Southeast Asia, where it expects to further expand.

The chain -- now with over 300 stores across Japan -- is a must-visit among tourists to Japan. There is much to like -- duty-free shopping and a vast selection of discounted products, ranging from packaged food, alcohol and consumer electronics to luxury brand items and cosplay costumes. 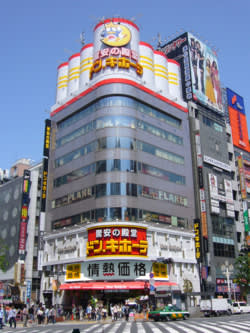 Japan's popular Don Quijote stores, many of which are open 24 hours, are found throughout the country.   © Don Quijote

Now shoppers in Singapore can get a taste of "Donki," as it is commonly known, with a store opening in the city's Orchard area, the company said this week.

In Singapore, Donki will offer a range of Japanese pop culture products. But other details -- like the store's opening date, its operating hours and what kind of prices to expect -- have yet to be announced.

This isn't the first time Donki has ventured overseas. It currently operates three stores in Hawaii. In 2013, it acquired Marukai, a small chain of Japanese grocery stores in the U.S. state of California.

But the Singapore emporium will be the retailer's first in Southeast Asia, and the group is looking at opening more stores in the region, a Donki spokesman said, without elaborating on details or strategy.

In Japan, Donki is also known for its long opening hours, with around 10% of its stores open 24 hours. A typical store offers a selection of around 45,000 goods, stacked on shelves so high that shopping can be a mazelike experience. Thanks to their low prices and multilingual displays, the mazes have seen a surge in overseas customers. The number of foreign visitors to the stores soared 62.4% in 2016, the company said.

Peek shopping hours for domestic customers are 3 p.m. to 5 p.m. The number of overseas visitors, though, tends to peak around 10 p.m., the spokesman said, with many visiting the stores after dinner or after spending the day sightseeing. He said South Koreans account for nearly 40% of its overseas customers, followed by Chinese, Taiwanese and Thais. 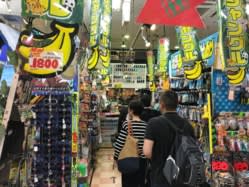 Shoppers wander through a mazelike Don Quijote store in Tokyo.

Japan has been experiencing a tourism boom. Last year, it welcomed 24 million visitors, an increase of 21.8%. Of the total, over 20 million came from Asia, led by tourists from South Korea, China and Taiwan. Prime Minister Shinzo Abe's goal is to increase the number of foreign visitors to 40 million by 2020, when Tokyo will host the Olympics.

Donki is now featured in most guide books. It has its own mascot -- a blue penguin wearing a red cap -- and theme song, "Miracle Shopping," which plays on a loop in its stores.

The company began in 1989. Its revenue and operating profit have grown for 27 consecutive years. It expects sales of more than 800 billion yen for its current fiscal year, through this month.