China's DJI, Japan's Yamaha and others compete in accuracy, mobility and price 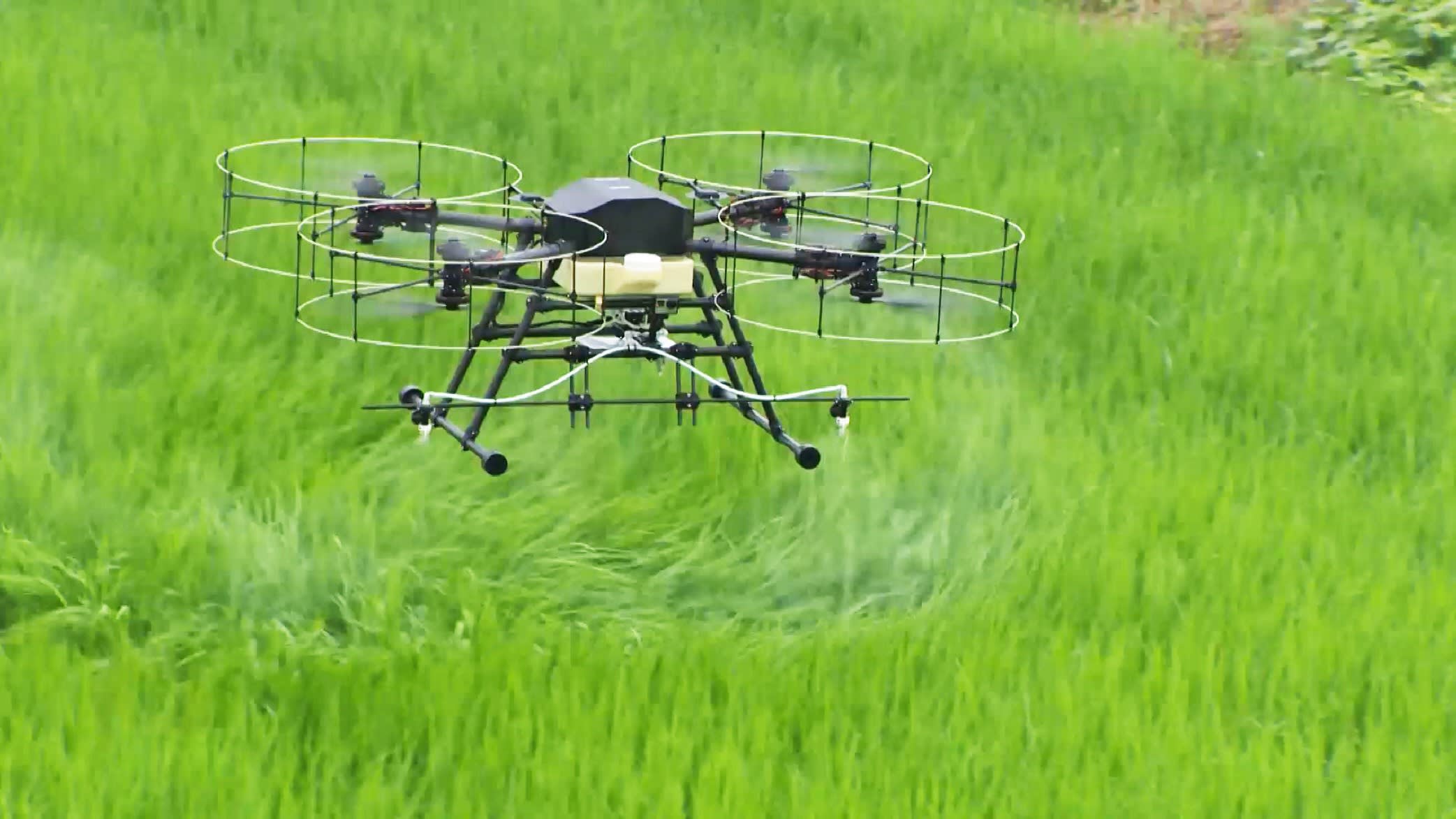 With drones like this one from Nileworks, Japanese rice farmers might be able to match California farmers, who can produce rice at 25% of the cost in Japan.
RYOSUKE EGUCHI and NAOKI MATSUDA, Nikkei staff writersNovember 6, 2017 12:00 JST | China
CopyCopied

A heavy tank hangs over a farmer's shoulder as he wades through a paddy spraying a pesticide on his plants. It is summer in Japan's rice fields, and the people carrying out this chore are aging.

That is one reason this work may be on the verge of extinction. Another is that by next summer commercial drones will be on some of Japan's rice farms, carrying the tanks themselves and doing the spraying automatically. They will also do other tasks so rice production can be carried out with fewer hands.

Tokyo-based research company Fuji Keizai forecasts that the global commercial drone market will grow to $3.5 billion in 2030, nearly eight times its size in 2016.

As for the agricultural drones that are about to hit the market, the question is: Where will they come from? The world's largest drone-maker is China's DJI. But Japan Inc. is gearing up to fight for market supremacy.

In the mountains near Hamamatsu, a central Japanese city on the Pacific coast, a drone that looks like a crab flies over a field that used to be a clay pigeon shooting range. We are watching Yamaha Motor's YMR-01 do some farming. Yamaha Motor's YMR-01 is on display at a trade fair east of Tokyo.

"Watch the number of blades," said Hiroaki Yoshiyama, a member of the development team. A drone that looks hexagonal when viewed from above usually has six blades, but the YMR-01 has eight -- four single axial rotors and two coaxial rotors. Below each set of coaxial rotors is a spraying nozzle.

The vertically placed coaxial rotors create downward air currents that drive the pesticides coming out of the nozzles toward the ground. "The chemicals reach the target area without dispersing elsewhere," Yoshiyama said. 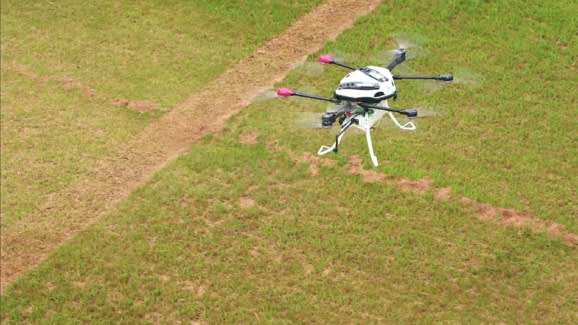 Plans are to begin marketing the drone next spring.

Yamaha Motor has made and sold unmanned chemical-spraying helicopters since 1987. About 2,800 of these choppers are registered in Japan and spray some 40% of the country's paddies. The company better known for its motorcycles generated sales of about 5 billion yen ($43.9 million) from its unmanned aircraft business in 2016.

Now it is getting into drones because "there are needs that cannot be met by unmanned helicopters," said Katsu Nakamura, who heads Yamaha Motor's unmanned systems department. Succeeding in the sector could send the department's sales over 10 billion yen.

Unmanned helicopters cost more than 12 million yen each. That puts them out of the reach of the individual farmers whose fields they spray. So agricultural cooperatives and other groups usually buy them.

The big birds are also bulky and difficult to operate, so dealerships often send employees out to do the spraying for the farmers. And since helicopters are seldom used in mountainous areas, where small-time farmers take care of about 30% of Japan's rice paddies, the spraying on this kind of terrain is done by hand. 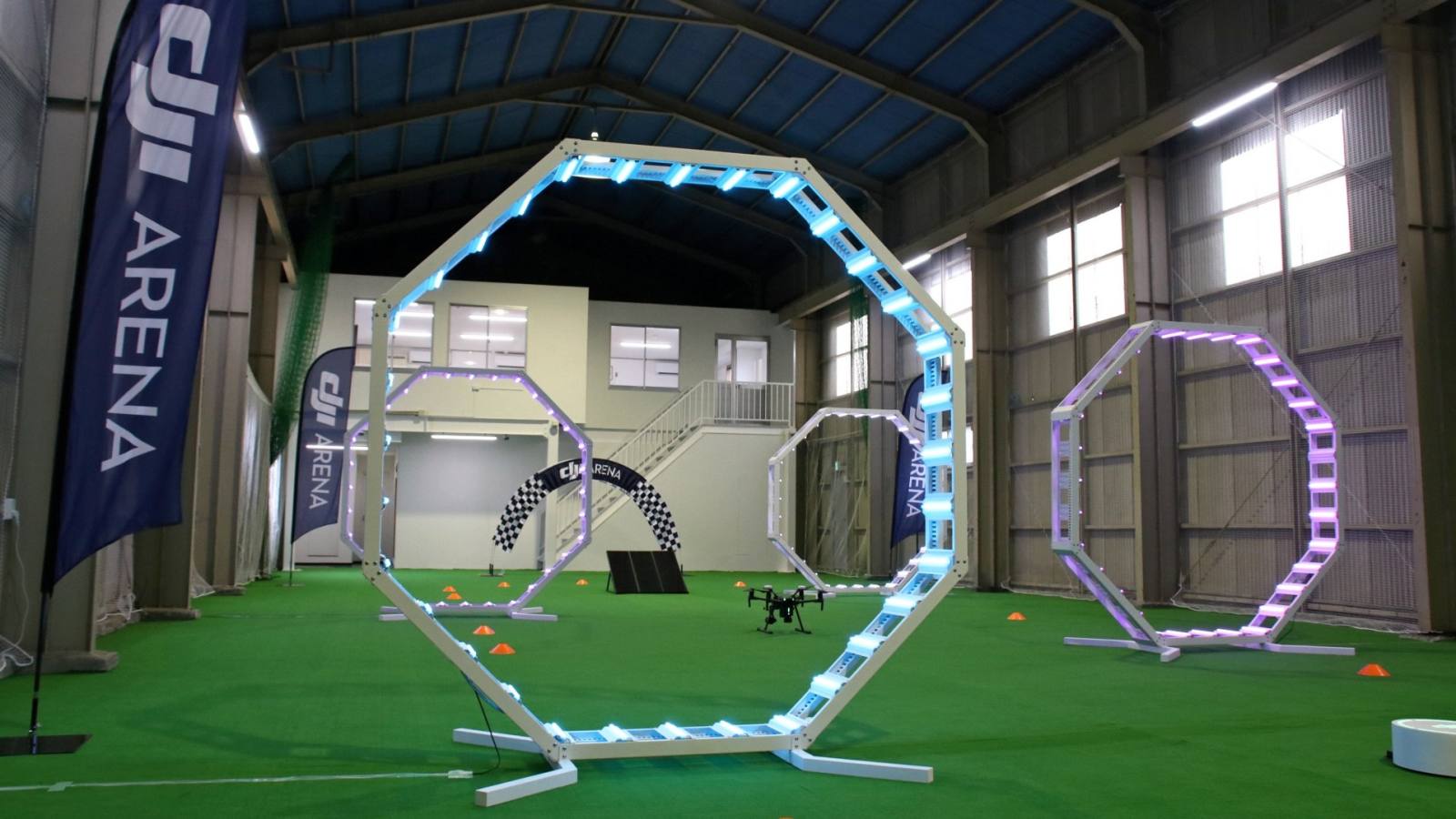 Drones to protect farms from wildlife -- and wildlife from us

Yamaha Motor had a booth at the fourth Agri Next trade fair, held in October at the Makuhari Messe convention center in Chiba, east of Tokyo. People who work in agriculture stopped by and listened to explanations of how the company fit its unmanned helicopter expertise into the YMR-01. They were also told that the drone's electric motor produces little noise.

What those in attendance did not hear is how much the drone will cost. Yamaha isn't saying yet, but estimates are in the range of 2 million yen to 3 million yen. "This would be easier for an individual to own," said a male farmer from Niigata Prefecture.

Anyone looking to buy an agricultural drone will have a choice. DJI, which some analysts believe controls 70% of the global drone market, will also be competing for farmers' business.

At Agri Next, the Agras MG-1, DJI's latest drone, was shown by Skyrobot, a Tokyo-based drone development and sales company that drew crowds to its booth with flying demonstrations. DJI's latest drone uses a microwave radar to confirm its altitude, which it can maintain without human guidance. Sales reps at the booth said a soil diagnostic service is available and that more detailed diagnoses will become possible in the spring.

Other makers were also trying to grab show-goers' attention. "We want to make Japanese rice fields the most efficient in the world," said Hiroshi Yanagishita, president of Nileworks, a Tokyo startup that developed a rice-cultivation drone. Nileworks' drone features a camera that helps farmers manage crop growth and know where to spray fertilizers and chemicals.

"Our rice cultivation drone technology is taking the global lead," Yanagishita said. Nileworks says its drone has a number of advantages. First, the machine can automatically maintain its flight, never wavering more than 2cm horizontally or 5cm vertically, thanks to 12 types of sensors. Another advantage, Yanagishita said, is the drone's high-performance camera, which can take 15 shots per second. This helps in analyzing how well plants are photosynthesizing and how much starch is present in the plants. Knowing these details is necessary to ascertain crop growth and determine when fertilizer and chemical spraying is needed.

Nileworks will price its drone at about 3.5 million yen. It expects to sell 15 units to rice growers with paddies of at least 30 hectares on a trial basis beginning in May. It plans to start regular sales in 2019 and have 4,000 drones in use by 2021.

"California rice is produced at a quarter of the cost for general rice in Japan," Yanagishita said. "We want the use of drones to reduce the production cost in Japan to that level."

Mitsubishi Corp. is also ready with a farming drone. The trading house is providing a service to farmers and municipalities through Skymatix, a Tokyo company it jointly owns with Hitachi. 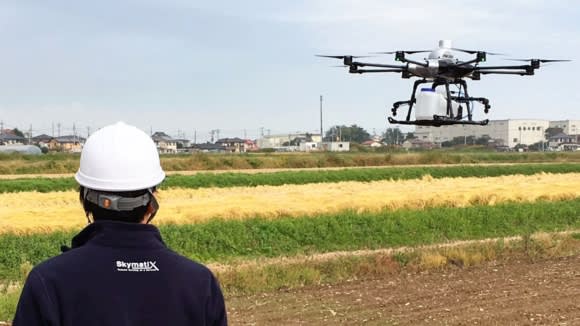 That's a 10-liter tank on a bulky drone operated by Mitsubishi Corp. affiliate Skymatix, which sells spraying services to farmers and municipalities.   © Kyodo

Mitsubishi's drone is large enough to carry a 10-liter chemical tank. Farmers control the drone and where it sprays with a tablet computer. Spraying records that need to be reported to municipalities, meanwhile, are managed in the cloud, saving farmers the work of preparing documents.

Because of the prices they will have to charge, companies that sell agricultural drones will have few customers. If drone makers are going to be profitable, then, they will also need to offer after-sales services.

Japan suffers from a serious labor shortage on its farms. The country has 1.81 million farmers, 70% of whom are 65 or older. To be globally competitive, Japanese farmers need to make do with fewer hands. Yamaha Motor's Nakamura wants to offer drones instead. "The drone business," he said, "will have more opportunities."