NEW DELHI -- Japan's Honda Motor is betting big on India, a country which accounts for 30% of its global two-wheeler sales and, the company believes, holds great potential for further growth.

Its 100% subsidiary, Honda Motorcycle & Scooter India (HMSI) -- the second-largest company in the country's two-wheeler industry -- has earmarked investment of nearly 8 billion rupees ($123 million) for the financial year that began on April 1 -- and is aiming for double-digit growth again. Honda's estranged partner Hero Motocorp is the market leader.

At the end of the last financial year in March, the company had cumulative annual production capacity of 6.4 million units, compared to just 1.6 million units in the year ending March 2011. Now it is looking to take the top sales spot by 2020.

"We don't have any numerical target from the market-share point of view," Minoru Kato, HMSI President and CEO, told the Nikkei Asian Review. "We have a strong intention to be number one as early as possible," he added, but acknowledged that the company will need to make "a big jump," with competitors also pushing hard for market share.

Honda sold over 6.12 million units in the last financial year, achieving 22% growth over the previous year. Of this, 300,000 units were exported, up 23%. The company enjoys the leadership position in scooters, with 57% market share, compared to just 14% in the popular motorcycle segment. 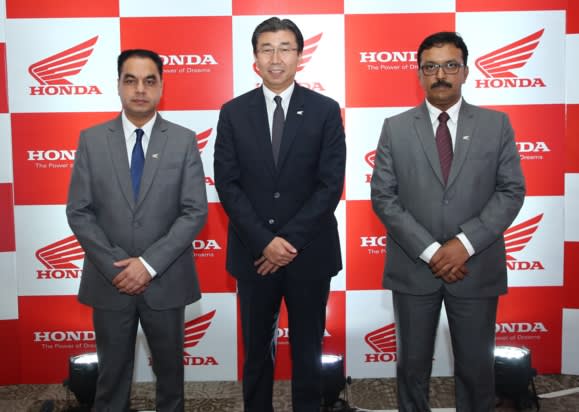 In the last financial year, India -- the world's largest two-wheeler market -- passed the 20 million unit sales mark for the first time, with the industry growing by 15% and returning to double-digit growth after a gap of six years, according to Yadvinder Singh Guleria, HMSI's senior vice president, sales and marketing.

In comparison, Hero Motocorp, with sales of over 7.58 million units, registered 14% growth over the previous year, commanding more than a 50% share in the domestic motorcycle segment.

In 2010, the two partners broke up after running a joint venture for 26 years, owing to their ambitious independent plans, including Hero's reported objective to expand aggressively overseas.

When they parted ways, Honda -- for which India is now the top contributor to its global two-wheeler business -- had only one manufacturing plant, in Manesar in the northern Haryana state. Since then it has rapidly gained ground, adding three more plants, in north-western Rajasthan, southern Karnataka and western Gujarat states.

From April 2020, the stricter BS-VI emission standards (which are comparable to Euro VI standards) will come into effect in India, leapfrogging the current BS-IV regulations. In the capital city of New Delhi, which is battling serious pollution levels, the regulation is applicable in advance from April this year and BS-VI compliant petrol and diesel are already on sale there.

Kato said the 8 billion rupee investment this fiscal year will mainly be used at existing Indian facilities to prepare the company's models for the BS-VI regulations. The remainder will fund 18 model upgrades across the company's scooter and motorcycle segments, and one brand new model.

The outlay was 12 billion rupees last year because of the addition of a new assembly line in Karnataka to scale up operations. There is no plan this year to invest in new facilities.

Asked whether the company plans to introduce an electric scooter in India given the government's push for electric vehicles, Kato said it had no firm EV plan yet. He pointed out that Honda has been making EVs for the past 25 years, but India is a highly price-sensitive market, where the price of an electric scooter could prove much too expensive for customers.

"In this country, the motorcycle price range is very much competitive. There's a very tough competition," he added.

The company, which supplies to 27 countries including Sri Lanka, Nepal and Bangladesh, also aims for India to be an export hub.

"Honda global headquarters in Japan has the responsibility to allocate which model will be exported from which factory to which destination. We want to raise our hand to become a candidate [supplying] to more destinations as an export hub," Kato said.

He said the Indian two-wheeler market still has "big potential" to grow in the next 10-20 years, unlike countries in the Association of Southeast Asian Nations such as Thailand, Vietnam and Indonesia, which have almost matured.

The company also aims to tap more rural customers, while still focusing on urban clients. "In rural areas, many customers still don't have a motorcycle or a scooter," Kato said, while urban clients are looking to replace their existing two-wheelers with much more advanced models. "So we want to focus on both customers."

In pursuit of double-digit growth again this year, Kato said the company would focus on maximizing the sale of new models, including the Grazia scooter launched in November 2017 and the X-Blade motorcycle introduced at the India Auto Expo in February.

"Honda led this growth momentum from the front. Backed by strong customer demand we surpassed our most challenging sales target and closed the year with 6.1 million units, a record 1.1 million [units of] additional volume," Guleria said. "Leading Honda's performance last year was the iconic Activa [scooter]. It continued to be the highest-selling two-wheeler in the country."

In the motorcycle segment, Honda gained new customers with growth of 27%, led by its flagship motorcycle CB Shine.

"Our new capacity infusion, aggressive product introduction and rapid network expansion in the hinterlands supported Honda's intent to lead the two-wheeler growth in the country. Last year we expanded our network to the 5,700-plus mark with 70% of new network coming up in rural areas," Guleria said.

Kato, who became the India head a year ago, said the last fiscal year was "a historic record-breaking year for us ... Now every third Honda two-wheeler sold in the world comes from India."

He added: "We aim for double-digit growth in this fiscal year as well. Not only will we fully utilize our existing capacity but also innovate to maximize our plants' efficiency."