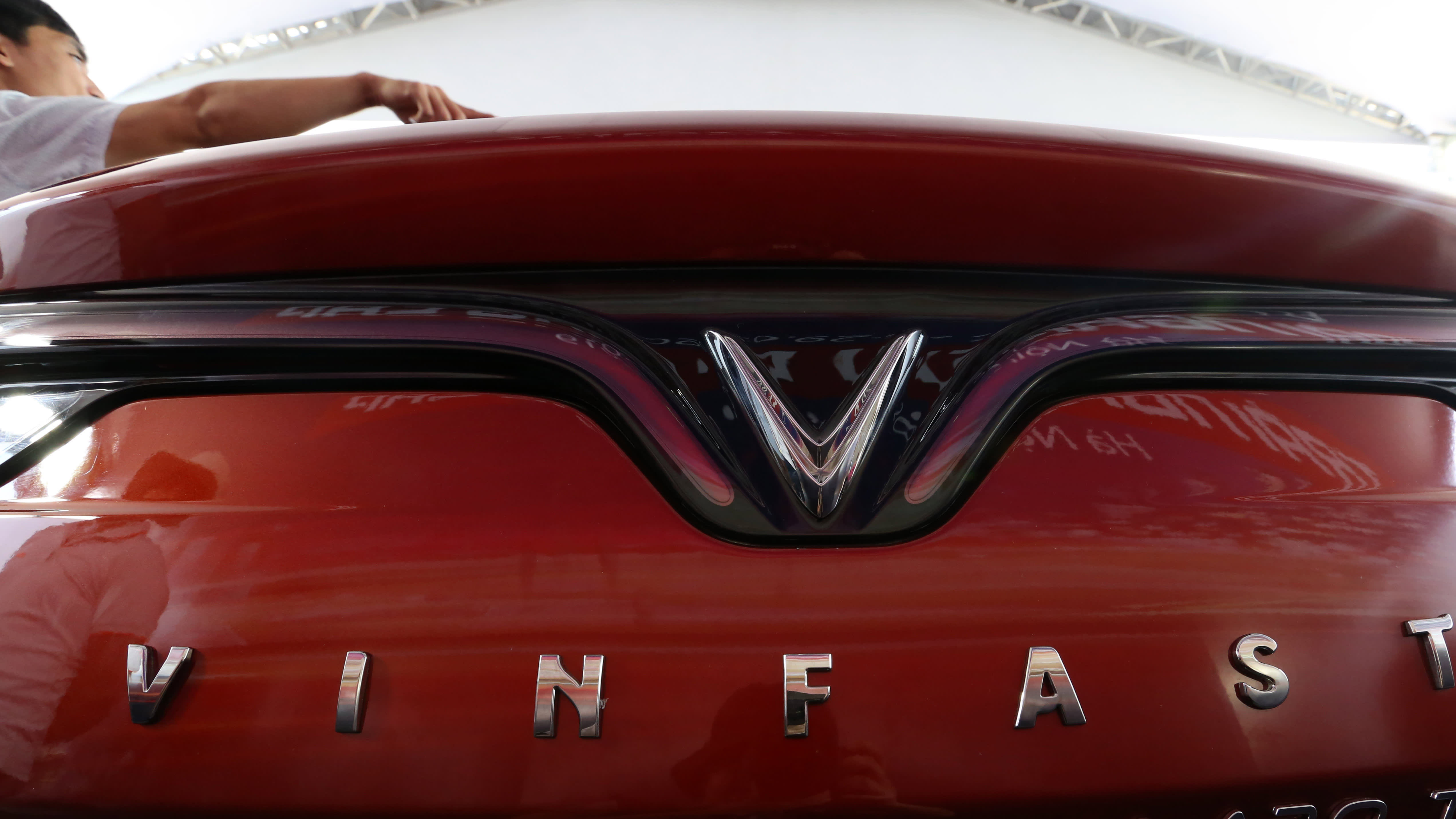 A VinFast vehicle is exhibited during a press conference in Hanoi. (Photo by Rie Ishii)

HANOI/BANGKOK -- Vingroup, Vietnam's largest company, plans to issue this year its first baht-denominated bonds, according to sources, as the sprawling conglomerate seeks to expand its loss-making cars business and has all but exhausted its funding options at home.

The move to issue Thai debt may carry financial risks for Vingroup, which is in the middle of a restructuring that aims to sharpen its focus on technology and manufacturing, because the baht is widely expected to appreciate further this year. This could increase debt service costs for the already-indebted company.

Thailand's Ministry of Finance said it had approved the group to issue debentures until the end of September.

Details of the issuance "have yet to be determined," sources at Vingroup and brokerages told the Nikkei Asian Review. "When and to whom the bonds will be sold have not been decided."

Vingroup declined to comment on how the proceeds of the bonds will be used.

The baht strengthened 8% against the U.S. dollar in 2019, despite the Bank of Thailand's efforts to curb the currency's appreciation. The uptrend is expected to continue, backed by the kingdom's steady current-account surplus.

Vingroup sources auto parts from Thailand for its young automaking business, and industry experts in Vietnam suggest the new funds might be used to pay for such imports.

If Vingroup intends to invest outside Thailand, the baht's gains could boost its purchasing power. On the other hand, unless the bhat bonds are hedged, the currency's strength may become a burden when the bonds mature. Currency hedges are a form of financial contract that issuers can buy to protect them against changes in exchange rates.

The group is also studying the possibility of issuing bonds in other foreign currencies in another market during the following months, according to sources at Vingroup and brokerages.

In August, the group sent a letter to shareholders asking for approval to raise $750 million by issuing dollar-dominated debt in Singapore.

Vingroup, which is listed on the Ho Chi Minh Stock Exchange, expanded aggressively over the past few years, with moves into smartphones and auto manufacturing. However, late last year the group suddenly signaled a shift in direction, with a slew of announcements of changes to its expansive portfolio.

On Dec. 3, the group shocked the market, saying it would withdraw from supermarket and convenience store operations by merging its consumer businesses with Masan Group, a rival conglomerate engaged in consumer products and mining.

The news was followed by another announcement on Dec. 18, when Vingroup said it would shut its appliance store chain, which has about 80 locations across the country, in a move to completely exit directly operated retail outlets.

Vingroup's changes have gone beyond the retail segment, with an announcement on Tuesday that it canceled plans to enter the aviation business. "We need to use all our resources and focus on our industry and technology business," Vingroup CEO Nguyen Viet Quang said in a statement that day.

Originally a property developer, Vietnam's biggest conglomerate in 2014 began to diversify into fields including retail, education and health care. It entered car manufacturing in 2017 and made its way into electronics manufacturing in 2018. In July last year, the group said its expansion would reach the skies with a new aviation unit, only to scrap the plan.

Vingroup's total assets in the nine months were 357 trillion dong, up 33% on the year. Debts increased 36% to 231 trillion dong, equivalent to almost two-thirds of the group's assets.

Vingroup in 2017 said it aimed to allocate $3.5 billion for developing the group's auto brand, VinFast. The group earmarked $1.5 billion to build a factory with an initial output target of 250,000 vehicles a year. Pham Nhat Vuong, Vingroup chairman and founder, told Bloomberg in December that he was ready to spend an extra $2 billion of his own money on VinFast with the aim of entering electric-car production in the U.S.

Tran Hong Ninh, director of Auto Hospital, said Vingroup would need to invest a massive amount of money to make its way into auto and electronics manufacturing. Vingroup's car unit declared in November a loss of up to 300 million dong per vehicle it put on the street. Vingroup said on Friday that it had produced 15,000 cars just six months from the launch of production in June 2019.

A source familiar with Vietnam acknowledged that the funding environment surrounding the conglomerate has deteriorated even as it focuses on capital-intensive industries. "It may be easier to issue baht bonds in Thailand than in other countries," the source said.

Vietnam's central bank said in November it would adopt new regulations effective in January to tighten banks' lending to the property sector, the group's core business, to ensure the sustainability of the banking sector, which suffered from nonperforming loans. Vietnamese banks have also rushed to raise capital to meet Basel II standards, which came into effect in Vietnam on Jan. 1.

The new standards reduce banks' ratio of short-term funds that can be used for medium-term and long-term loans to 40% this year from 45%, and to 30% by September 2022.

"Mortgages have been tightened, banks' capital is running out and loans for the real estate sector are reaching the ceiling, forcing companies to issue shares and bonds to raise funds for their investment," said Anh Pham, an independent business growth and strategy adviser.

Moody's Investors Service in December cut its outlook on the Vietnam economy to negative, concluding its review for downgrade that began on Oct. 9.

"Conditions are not good for Vietnamese entities to issue bonds in premier markets," said Anh. "Thailand will be the best option for Vingroup's baht-dominated bond issuance as its market regulation is more flexible."

The Thai Finance Ministry statement said that the ministry "reserves the right to restrain any baht-denominated bond or debenture issuance if there appears to be significant changes in the financial status or structure of the permitted entities."