TOKYO -- Toshiba ranks among corporate Japan's blue bloods, which makes its accounting scandal reverberate at the highest levels of business and politics.

Already a fixture in business and government circles, Taizo Nishimuro has gained greater prominence during the 140-year-old manufacturer's ongoing management crisis. He led the company from 1996 to 2000 and now serves as president of government-owned Japan Post Holdings while holding an advisory position at his former employer. 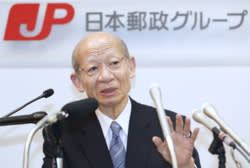 "That kind of thing musn't happen," Nishimuro told reporters Wednesday, referring to the more than 150 billion yen ($1.2 billion) of book-cooking exposed at Toshiba. "It's a very great shock. I'm saddened."

Among his many duties, Nishimuro sits on an advisory panel for a statement Prime Minister Shinzo Abe will deliver to commemorate 70 years since the end of World War II. At a dinner for panelists Tuesday, he assured Abe that he would "take it upon myself to restore Toshiba." The scandal prompted three current and former Toshiba presidents, all successors of Nishimuro, to resign that day. But he knows that it also threatens to leave a stain on Abenomics.

The independent panel investigating Toshiba's accounting improprieties blamed dysfunctional corporate governance as a contributing factor. This accusation is all the more jarring for being leveled at a company lauded as a role model in this regard, having adopted committee-style governance back in 2003.

Toshiba's fall from grace may even have implications for Japan Post Holdings, which is planning to list on the Tokyo Stock Exchange, along with its banking and insurance units, this fall. The group miscalculated by naming Fumio Muraoka, senior adviser at Toshiba, as a candidate for outside director. His nomination was on track for approval last month until the communications ministry, which oversees the postal service, expressed reservations on the day of the group's shareholders meeting. Muraoka eventually bowed out after being named in the investigative panel's report.

Worth an estimated 10 trillion yen, the postal group's triple initial public offering will mark Japan's biggest exercise in privatization since Nippon Telegraph and Telephone's 1987 listing. As a means of invigorating the stock market, and, in turn, the economy, the debut ranks alongside corporate governance reform in importance for Abenomics. Failure is not an option -- a stance apparent in Muraoka's sidelining.

Boasting 6 trillion yen in revenue, the Toshiba group does business with 22,000 companies in Japan alone, an analysis by Teikoku Databank finds. It enjoys prominent standing in the businesses community. Former presidents Taizo Ishizaka and Toshio Doko served as chairman of the powerful Keidanren corporate lobby; another, Tadashi Okamura, headed the Japan Chamber of Commerce and Industry.

Atsutoshi Nishida, one of the three presidents implicated in the accounting scandal, has served as a Keidanren vice chairman (as has Nishimuro). Another of the trio, Norio Sasaki, sat on the Council on Economic and Fiscal Policy, the government's top advisory body on such matters, in a post reserved for big business. It says much about Sasaki's influence as a former Toshiba chief that he had to inform Economic and Fiscal Policy Minister Akira Amari Tuesday morning that he was resigning from all his public duties.

Toshiba's share price has dropped by a fifth, erasing some 500 billion yen of its market capitalization, since its misreporting came to light on April 3. Some worry that the Toshiba affair may prompt foreign investors, who own 30% of shares in Japan's listed companies, to distrust Japanese corporate governance as a whole.

The presence of a Toshiba insider, rather than an outside director, at the head of its audit committee had raised questions about the body's ability to exercise proper oversight.