TOKYO -- Fast Retailing, the world's fourth-largest clothing retailer, wants to grow bigger. For that, it is casting its net overseas. It is also looking to create a new retail business model and take on major global brands regardless of product category. 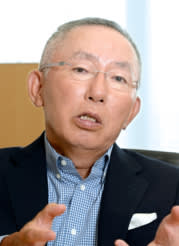 Fast Retailing Chairman Tadashi Yanai has talked about taking on global heavyweights like Apple and Disney.

"It could be Nestle, Disney or Apple," Tadashi Yanai, chairman, president and chief executive of Fast Retailing, said in June during a news conference in Tokyo to announce a tie-up with Accenture, the world's leading consultancy. "All brands all around the world will be our competitors from now on."

While Yanai's statement might seem cocky, there is a matter-of-fact philosophy behind it: "Each consumer", Yanai said, "has only one wallet."

If a business wants to reach into that wallet more often, perhaps it should sell more than just apparel -- and not be afraid of the giants of other industry's.

"What do you think we should do to beat Amazon.com?" Yanai was asked during a recent board meeting.

Yanai, known to give instant replies to most queries, did not have one this time. He remained uncharacteristically silent.

Amazon's dramatic growth -- it now makes and sells its own tablets and produces TV series -- continues. As far as its retail operations go, it was the No. 9 retailer in the U.S. in fiscal 2014. It was once thought that online retailers would fail in the apparel sector, but Amazon has proven that assumption wrong. The company is expected to surpass Macy's, a leading department store operator, and become the U.S.'s biggest clothing retailer by 2020.

While Amazon went online to storm the retail world, Yanai long remained unenthusiastic about web sales. Nowadays, however, he is said to be closely following Amazon's moves.

"Our business has not kept up with the world's increasing digitization," Yanai said.

Jack Ma Yun, founder of the Alibaba Group, China's e-commerce leader, has been credited with opening Yanai's eyes to e-tailing's potential. Softbank Group board meetings provide occasions for the two to meet; both serve as directors. Yanai is said to be an enthusiastic listener after these meetings when Ma waxes about his vision of the future Internet.

Yanai's newfound appreciation for the Internet has driven him to develop ideas for a Fast Retailing future in which web and brick-and-mortar stores flawlessly complement each other. His ultimate goal is to "provide a completely new shopping experience to customers."

One of Yanai's ideas is an app or other system that would allow smartphone users to order clothes by taking a picture of a design they like. The app would automatically find similar-looking products and present them to the user. If a selection is made, the piece of clothing will be tailored to fit the customer and delivered to his or her door. Aside from the power of the Internet, Fast Retailing has also made new hires to propel its growth.

For example, Yanai recruited John C Jay, a legendary creative director at U.S. advertising agency Wieden+Kennedy, to serve as a Fast Retailing director. Jay is well-known for ad campaigns for brands like Nike and Coca-Cola. He handled advertising for a Uniqlo fleece jacket 16 years ago. The product turned into a huge success and contributed to the brand's meteoric rise thereafter.

Jay, who took the job in January, is thought to be working closely with Yanai to create a future vision for the company. He is the second most senior executive, after Yanai, overseeing the Fast Retailing group's overall brand strategy.

Fast Retailing projected group sales of 1.65 trillion yen ($13.6 billion) for the year ended last month. Yanai has said he wants to raise that to 5 trillion yen by 2020. However, overseas expansion, which is essential to achieving the sales goal, has not progressed as smoothly as anticipated.

Yanai is famous for keeping an eye on every aspect of the company's operations, down to the size of fonts used in newspaper ads. But as Fast Retailing's global business scale continues to expand and the number of employees has reached 90,000, it is becoming simply impossible for Yanai to control everything.

Few would argue that Yanai's vision has been the main driver of Fast Retailing's extraordinary rise. But for the company to keep expanding, it must seek new seeds of growth and cultivate opportunities in overseas markets.