Lionel Barber to step down after 14 years in January TOKYO -- The Financial Times has named Roula Khalaf as its next editor, succeeding Lionel Barber.

Khalaf, a veteran foreign correspondent who has served as deputy editor since 2016, will become the publication's first female chief editor when Barber's tenure ends in January 2020.

The Lebanon-born Khalaf earned a master's degree from Columbia University's School of International and Public Affairs. After joining the Financial Times, she served as Middle East editor, where she led coverage of the Arab Spring uprisings.

More recently, she has helped shape the strategic direction of editorial operations.

"I am delighted that Roula Khalaf has agreed to take the position of editor," Kita said. "I have full confidence that she will continue the FT's mission to deliver quality journalism without fear and without favor, inspire and lead a team of the most talented journalists and pursue the FT's new agenda covering business, finance, economics and world affairs. 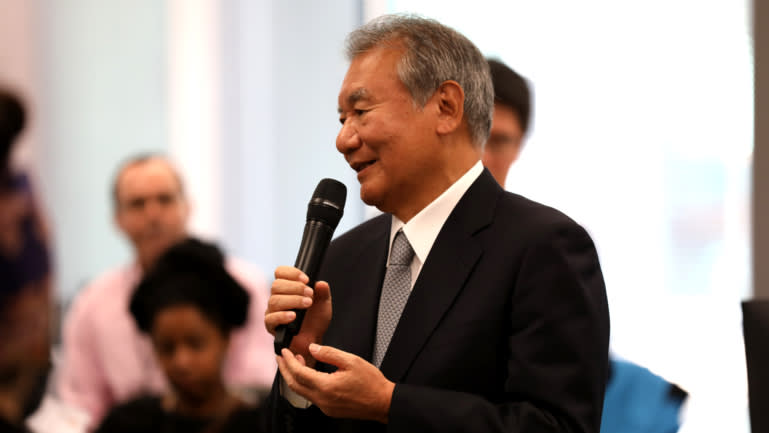 Nikkei Chairman Tsuneo Kita speaks to the Financial Times newsroom in London on Nov. 12. (Photo courtesy of the FT)

"Roula's 24-year FT career, including her tenure as deputy editor, has proven her integrity, determination and sound judgment. We look forward to working closely with her to deepen our global media alliance."

Khalaf said: "It's a great honor to be appointed editor of the FT, the greatest news organization in the world. I'm thrilled to be leading the most talented newsroom through the next chapter of FT excellence. I look forward to building on Lionel Barber's extraordinary achievements and am grateful for his mentorship through the years."

Barber was named editor in 2005 and shepherded the publication through its difficult transition from print to digital media. He was a forceful proponent of a paywall for FT.com at a time when most news organizations' digital strategies focused on advertising revenue.

His foresight helped the Financial Times achieve a readership of 1 million paid subscribers this year.

After Nikkei acquired the Financial Times in 2015 from Pearson, Barber played an active role in cementing the alliance.