HONG KONG -- SJM Holdings, the casino company which inherited the operations of Macau's former gambling monopoly, opened an exhibition gallery about the centuries-long history of the city's gaming industry on June 6.

Notably absent was the central figure in the industry's past half-century -- SJM Chairman Stanley Ho Hung-sun.

Ho, 96, has rarely been seen in public amid worsening health over the past decade. On June 12, he will step down from the board of SJM, completing his retreat from official operational involvement in the three main Hong Kong-listed companies through which he long dominated Macau's economy.

The danger for SJM is that the company could fade further into the background along with him. With Ho's departure, the company chairmanship is to be divided among four successors. Aside from just getting along, these four will be challenged to halt the stagnation that has seen the company slip from No. 1 in market share among Macau's six casino operators in 2013 to joint-fourth last year.

While the Macau market grew 19.1% last year, SJM's gaming revenues were flat. SJM lost another percentage point of market share in the first quarter. Even after a two-year rebound, its stock now trades at little more than a third of its last peak, near the end of SJM's run at the top.

"Certain stocks are 'cheap' for a reason. We think this is one of them," wrote analyst Vitaly Umansky of investment company Bernstein after the new management structure was announced. 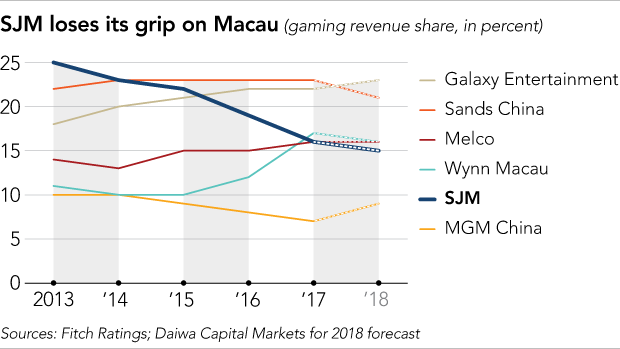 "Instead of using Stanley Ho's retirement as an impetus to make governance and management changes, the company has opted to further entrench the status quo," Umansky said. "We see no real positive changes to management that could turn the company in the right direction."

Even by its own account, SJM has been hurt by being the only operator without a major property in Cotai, the Macau district where its peers have invested billions of dollars to open sprawling gaming resorts. SJM began planning its own Cotai resort more than 10 years ago, but put on the brakes amid the global financial crisis and the following anti-corruption crackdown in China. Construction finally started in 2014 but was disrupted last year by typhoon damage and a fire.

"They desperately need a presence on Cotai," said Grant Govertsen, co-founder of boutique research house Union Gaming. "They are the least competitive operator in the market today."

Opening dates for SJM's project, the Grand Lisboa Palace, keep slipping. Chief Executive Ambrose So Shu-fai, who will also become vice chairman after Ho's retirement, told reporters on June 6 that he expected the project to open by the second half of 2019. The company in April asked the banks financing the 36 billion Hong Kong dollar ($4.6 billion) project for a loan extension.

The opening could then come just ahead of the scheduled expiration of SJM's gaming concession in March 2020. So said he expects the concession will be extended for two years to match the end date of four other operators. While there is little doubt that SJM's concession will be renewed, some observers are concerned the government could raise gaming taxes or impose more stringent investment requirements.

From June 12, So will be part of a chairman's office with Ho's daughter Daisy; Managing Director Angela Leong On-kei, known as Ho's fourth wife; and Timothy Fok Tsun-ting, whose family helped finance the launch of Ho's casino monopoly in the early 1960s.

This complex arrangement appears to be the legacy of a private 2011 settlement among Ho's four families. The agreement ended a lawsuit Ho had filed against Daisy and other relatives over a restructuring which eliminated Ho's stake in the family investment vehicle that indirectly controls SJM. The public spat was settled with the help of heavyweight mediators including Edmund Ho Hau-wah, former Macau government chief executive, and Elsie Leung Oi-sie, a former Hong Kong justice secretary. 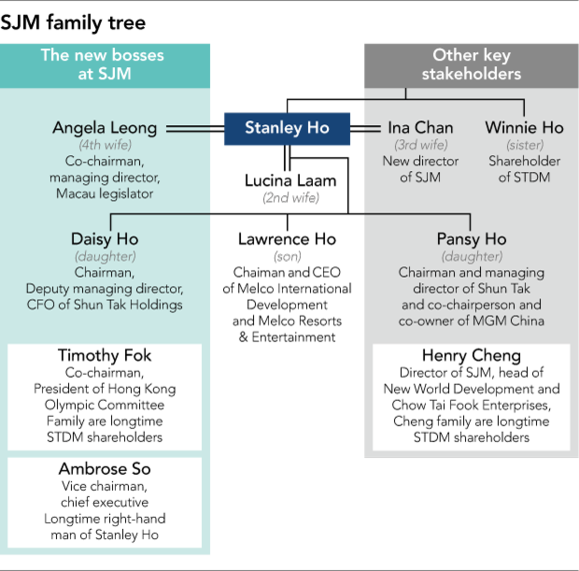 The unwieldly management arrangement worries analysts. Fifteen of 20 analysts tracked by Reuters now rank SJM as a "hold" or "sell."

"We can't help but thinking that the proposed board structure is bit messy, with too many interested parties," wrote D.S. Kim, regional gaming analyst for JPMorgan Securities, in an earlier note. "This complicated structure, in our view, leaves room for a potential power tussle within the board, given the lack of clear control."

Litigation has long dogged SJM. Its 2008 initial public offering was delayed by one of many lawsuits between Stanley Ho and his sister Winnie, who remains a key shareholder of Sociedade de Turismo e Diversoes de Macau (STDM), SJM's parent company. Throw in 17 children by four women and the outlook for more legal troubles would seem hard to avoid.

Any new family fights on the scale of the one in 2011 are likely to draw the attention of "external authorities," according to Joseph P.H. Fan, who studies family businesses as a finance professor at the Chinese University of Hong Kong, referring to rumors that Beijing helped cool that dispute. "To be fair, the Ho family has already done a very good job given the number of descendants," he said.

Ho's retreat could bring out more competitive tensions between his children. So, speaking on June 8, complimented Daisy's financial expertise, according to local newspapers. "She is going to be a good asset," he said.

Shun Tak Holdings, from whose board Ho retired last year, has a significant stake in STDM as well as ownership of Macau's leading ferry operator and property projects around China. The company is now run by daughter Pansy, who is also co-chairperson and co-owner of MGM China Holdings, another Macau casino operator. A MGM China stock exchange filing in 2011 put Pansy's effective economic ownership stake in SJM at 2.1%.

Lawrence Ho, a full brother of Pansy, runs Melco Resorts & Entertainment, yet another Macau casino operator, and he similarly retains a small indirect interest in SJM. Asked about his father's retirement and SJM, Lawrence last month said: "Good luck to them. I have been working on my own business over all these years."

Other competitive tensions could transcend the family. Henry Cheng Kar-shun, whose family has also long backed STDM, remains on the board of SJM even as his family's Chow Tai Fook Enterprises has gone into casino operations itself in the Bahamas and made moves in the Philippines, Vietnam, Australia and South Korea.

The lingering question for SJM is how much the opening of Grand Lisboa Palace will help the company get back on track. Daiwa analyst Jamie Soo earlier forecast that the company would regain 2 percentage points of market share once the new casino is open, enough to bring it back to a No. 3 ranking. At an investment conference last month in Hong Kong, fund manager Hermes Li of Aspex Management picked SJM as his best buy based on the coming lift from Cotai.

Others are not so sure. JPMorgan's Kim noted that the project has a poor location within Cotai, far from the other resorts or any station on the city light rail system now under construction.

"We view SJM as having bigger Cotai execution risk versus its peers, as it is the only operator that has no experience or expertise in 'integrated resort'-type casinos," he said.