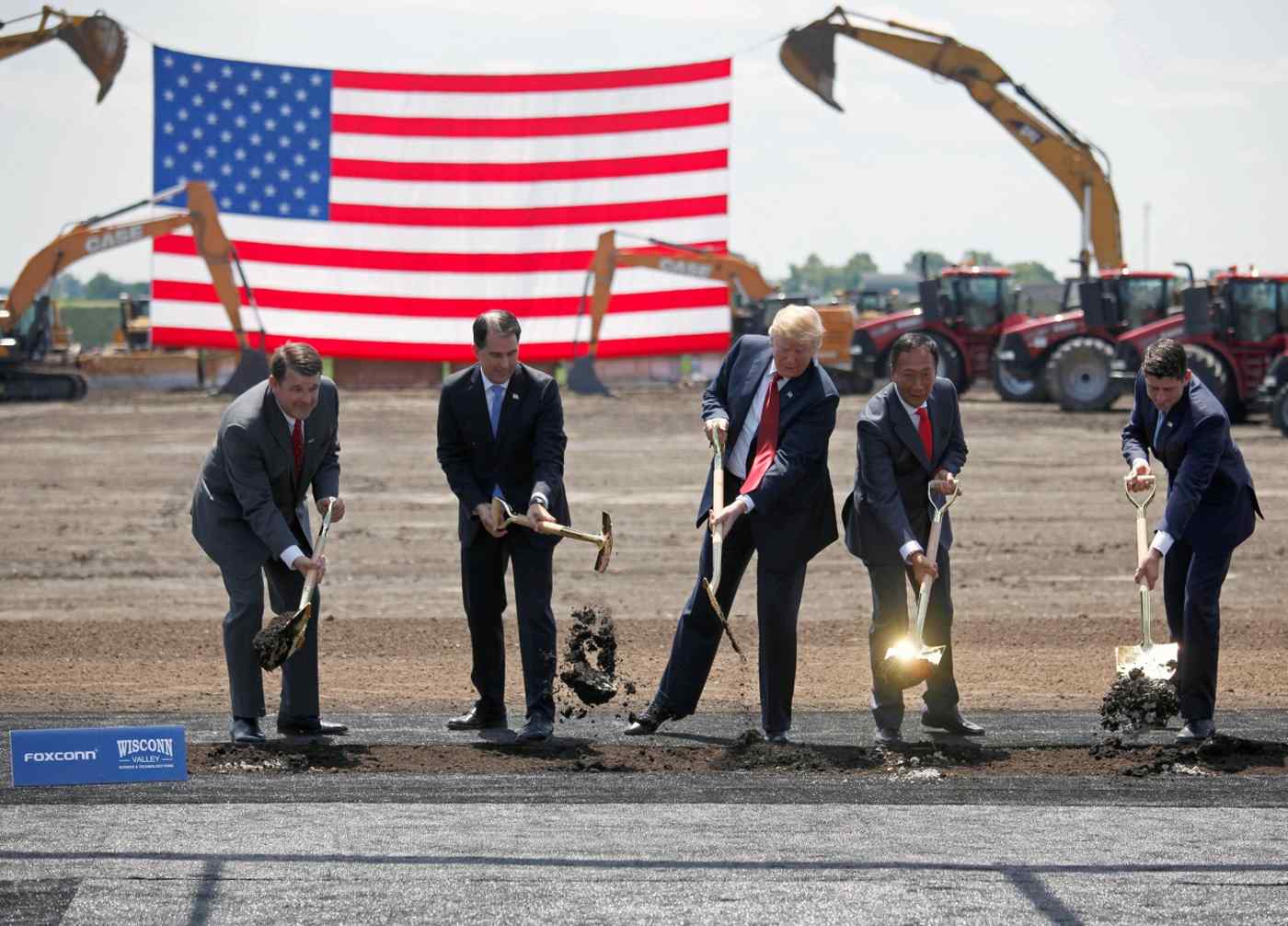 MOUNT PLEASANT, U.S. (Dow Jones) -- Foxconn Technology Group is considering bringing in personnel from China to help staff a large facility under construction in southern Wisconsin as it struggles to find engineers and other workers in one of the tightest labor markets in the U.S.

The company, the Taiwanese supplier to Apple Inc., has been trying to tap Chinese engineers through internal transfers to supplement staffing for the Wisconsin plant, according to people familiar with the matter.

The state pledged $3 billion in tax and other "performance-based" incentives to help lure Foxconn, and local authorities added $764 million. Foxconn must meet hiring, wage and investment targets by various dates to receive most of those benefits.

The company promised the state it would invest $10 billion and build a 22-million-square-foot liquid-crystal display panel plant, hiring 13,000 employees, primarily factory workers along with some engineers and business support positions.

Foxconn said its "Wisconsin first commitment remains unchanged," in a written statement to The Wall Street Journal in response to questions about its hiring plans. In a separate statement it said it still plans to ultimately hire 13,000, and the majority "will work on high-value production and engineering assignments and in the research and development field."

After an earlier version of this article posted online, Foxconn said in another statement, "We can categorically state that the assertion that we are recruiting Chinese personnel to staff our Wisconsin project is untrue."

A tight labor market is making recruiting a challenge. Unemployment in the state reached a record low earlier this year. At 3.0% in September, Wisconsin's jobless rate is well below the national average, which hit 3.7% that month -- itself a 49-year low.

Labor shortages are a national challenge. In September, employers nationwide had more than a million more unfilled job openings, at 7.01 million, than there were unemployed workers, according to the Labor Department.

Average time to fill vacant job positions reached a record high of 32.3 working days in September, according to University of Chicago labor economist Steven Davis. It took more than 40 days to fill jobs in the tech-heavy information industry.

"It's very difficult to find skilled labor in our market," said Loretta Olson, who owns an Express Employment Professionals staffing office in Racine, Wis., near the planned plant. She also serves on the board of the Racine County Economic Development Corp., which worked to attract Foxconn to the area.

Finding skilled labor is proving to be a problem nationwide. The Wall Street Journal reported Monday that Amazon has scuttled its original plan to pick a single location for a second headquarters, opting instead to build two hubs, according to a person familiar with the matter. The move stems, in part, from Amazon's need for talent -- and lots of it -- so increasing the number of locations will provide better access, the person said.

Ms. Olson said Wisconsin employers are improving benefits and offering more perks to avoid having Foxconn poach their workers. She said Foxconn is actively engaged with high schools and local colleges to produce the workers it will need at the plant when it is completed.

"All the technical schools and local universities are gearing up their programs, but I still think Foxconn is going to fall short in terms of finding the people they need," she said. "They're going to have to recruit from outside the area."

Foxconn Chairman Terry Gou is looking to company engineers in China to transfer, according to people familiar with the matter. Some engineers have expressed reluctance to relocate to Wisconsin, which is less well-known to Chinese workers than U.S. tech hubs in California or New York.

One engineer who declined to give his name said he wouldn't want to move to a place he worried could be as cold as Harbin, a northern Chinese city known as "Ice City."

Racine County isn't particularly diverse. More than 80% of the population is white, and less than 2% is of Asian origin, according to the Census Bureau.

Mr. Gou is upset that few Chinese workers have volunteered to move to Wisconsin if called upon, people familiar with the matter said. It is unclear how many the firm is looking to transfer.

Work on the plant is likely to slow in the winter, picking up again in the spring, meaning the company isn't yet hurrying to transfer engineers from China.

At a job fair in mid-October in Wisconsin, Foxconn officials interviewed about 300 people out of 1,300 who applied. Applicants came from Wisconsin, Illinois and other states, said Alan Yeung, director of U.S. strategic initiatives at Foxconn.

Few, if any, of the positions were for factory workers. Mr. Yeung said those jobs wouldn't come until the production line was operational. There's no preference given to applicants from Wisconsin, Mr. Yeung said in an interview last month.

In a statement Tuesday, after this article was published, the company said, "We continue to focus on hiring and training workers from throughout Wisconsin. We will supplement that recruitment from other U.S. locations as required."

Foxconn originally scheduled for the plant to be operational in 2020.

The company had planned to construct a high-tech manufacturing facility in Racine County to produce large liquid crystal displays, but has since switched to a facility that makes smaller panels, according to a statement provided to the Journal in response to questions about its business plans.

It isn't clear whether the company's shift in plans will affect the number of workers it needs, or the balance between factory workers and engineers hired. Foxconn originally projected it would hire 9,817 hourly operators, 2,363 engineers and 820 business support staff, according to an economic impact statement prepared by Ernst & Young LLP in July 2017 for the state on behalf of the company.

Wisconsin Gov. Scott Walker, a Republican, who is in a tight race for re-election, has been accused by his Democratic challenger, Tony Evers, of making a bad deal with Foxconn. Mr. Evers and other state Democrats have said the incentive package given to Foxconn was too large and have highlighted concerns over the company's changing plans.

President Trump and Messrs. Gou and Walker celebrated Foxconn's planned investment at a groundbreaking in Mount Pleasant in June. President Trump thanked Mr. Gou for investing in the U.S. and said the plant, about 25 miles south of Milwaukee, "will provide jobs for much more than 13,000 Wisconsin workers."

The Wisconsin Economic Development Corp., the agency responsible for negotiating the deal with Foxconn, said in a statement that "while the scope of the project may be modified between now and the time the facility opens ... we are confident Foxconn will meet the job and capital investment requirements of its contract."

Ian Robertson, head of the engineering school at the University of Wisconsin-Madison, said that even without Foxconn, the state has a challenge attracting enough engineers.

"If you look at our numbers, the answer is no," said Mr. Robertson, about whether there are enough engineers to supply Foxconn at this stage. The school of engineering currently has 4,500 undergraduates and 1,400 graduate students, he said.

"We're going to have to attract more people and so is Foxconn," said Mr. Robertson.

In August, Foxconn said it was donating $100 million to the school of engineering to help create a new research institute that will collaborate with the company.

Attracting engineering graduates to Racine could be a challenge. Census data shows that the region has seen a net outflow of workers to other states. About 55% of the University of Wisconsin-Madison engineering school graduates leave the state, according to Mr. Robertson.

Companies normally look to Silicon Valley, Boston or New York City for a strong base of tech talent, and plenty of universities feeding the pipeline. Foxconn picked a county of about 200,000 people between Chicago and Milwaukee, but a two-hour drive from the state's flagship university.

"It's like, Racine, really?" said Willy Shih, a professor at Harvard Business School, about the decision to create a research-and-development facility in southeastern Wisconsin.

The state has pitched Foxconn's investment as a way to create a technology infrastructure similar to Silicon Valley. It dubbed the southeastern Wisconsin area the "WisconnValley," in the hopes of creating a Midwestern hub for tech talent.

There are a large number of global manufacturers based in Wisconsin, including Oshkosh Corp. , Briggs & Stratton Corp. and Harley-Davidson Inc. Other international firms, including an arm of Japanese heavy-equipment manufacturer Komatsu Ltd. and German candy-maker Haribo GmbH, are building facilities in the state.