The company hopes to offset the impact of China's slowing economic growth by strengthening its operations in Guizhou, a province that has been logging double-digit growth by focusing on the big data business.

Foxconn will boost output at a plant operated by Hongfujing Precision Electronics (Gui yang), a subsidiary it launched in September 2015 at a cost of 350 million yuan ($51.7 million). Operational since March 2016, it is Foxconn's third server factory after those in the cities of Shenzhen and Tianjin. Last year, the plant cranked out about 10,000 servers with a shipping value totaling about 340 million yuan.

The servers being produced in Guizhou appear to going to U.S. PC maker HP and are mainly midlevel to advanced models for big data analysis using artificial intelligence and cloud services. Last year, 95% of Foxconn's servers were shipped overseas, going to such countries as Mexico and Czech Republic. Foxconn has set a goal of producing more than 20,000 servers at the plant this year with a shipping value of shipping 1 billion yuan by tapping its domestic customers.

The opportunities in China are growing. The government is backing the construction of smart communities that use AI and big data analysis to help ease traffic snarls and reduce energy consumption. Beijing aims to triple the big data-related market to nearly 1 trillion yuan by 2020. 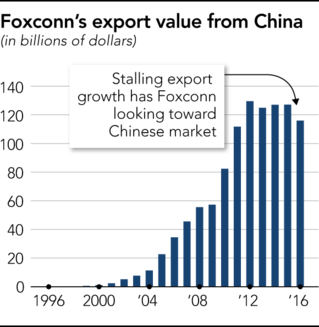 Foxconn's plans for Guizhou also include automating the assembly and other processes at its smartphone plant there this year to keep quality high and improve cost competitiveness. The company wants to expand its earnings base by serving customers other just than Huawei Technologies.

Foxconn's exports from China came to $115.9 billion last year, down from around $120 billion between 2012 and 2015. The company plans to build a factory in the U.S. in response to U.S. President Donald Trump's "made in America" push. With exports from China becoming increasingly difficult to increase, Foxconn is looking for ways to better cater to Chinese demand.