From sports gear to flying cars, Mizuno hits all fields OSAKA -- A mysterious pair of sneakers created a buzz among the millions watching this year's Hakone Ekiden relay marathon, after a runner wearing them set a new record for the January premier collegiate event.

Revealed later to be Mizuno's Wave Duel Neo, the stylish new shoes were not just the latest design in footwear, but also the inspiration for a side project: flying cars.

The leap into the automotive industry is just one way the century-old company is trying to transform itself into an all-around player with moneymakers beyond sports as it has seen sales sink for four consecutive years.

Part of the problem stems from Mizuno being a big fish in a shrinking pond. About 70% of sales come from Japan, where it holds a high market share in baseball gear. That strength turned into a weakness this year when it lost brand exposure offered by the Koshien high school baseball tournament, a widely popular event that was canceled because of the coronavirus pandemic.

"At this point, there's no knowing what new business will contribute [to earnings], or how much," President Akito Mizuno told Nikkei. But this has not stopped the company from exploring new avenues. The base of this prototype car seat incorporates technology from Mizuno shoe soles. (Photo courtesy of Mizuno)

For example, the Wave Duel Neo features the Mizuno Wave -- a piece of corrugated plastic that gives runners both cushioning and stability by absorbing impact from all directions. The company hopes to apply the technology to make shock absorbers for seats in flying cars.

"Mizuno Wave's simple structure makes it easy to calculate how much impact it can absorb, cutting time for research," said Masahiko Matsuhashi, chief engineer at SkyDrive, a Tokyo-based startup partnering with Mizuno on the shock absorbers. The goal is to commercialize a flying car by 2023.

Mizuno technology also features in Toyota Motor's Mirai fuel-cell vehicle, which was supposed to ferry athletes and staffers at the now-postponed Tokyo Olympic and Paralympic games. The exterior of Mirai's hydrogen tank is made with Mizuno carbon fiber, originally developed to be used in golf clubs and tennis rackets.

Mizuno was picked in 2017 to supply carbon fiber for the Mirai, the company said. It has invested 1 billion yen ($9.37 million) into expanding its production capabilities in Gifu Prefecture, and will increase output as Toyota starts selling the fuel-cell vehicle worldwide.

The push to diversify is fueled largely by Mizuno's sluggish earnings in recent years. The company suffered a 23% plunge in net profit to 4.6 billion yen for the year ended March. Sales fell by 5% to 169.7 billion yen, marking the fourth straight year of decline, while operating profit dropped 18% to 6.2 billion yen. 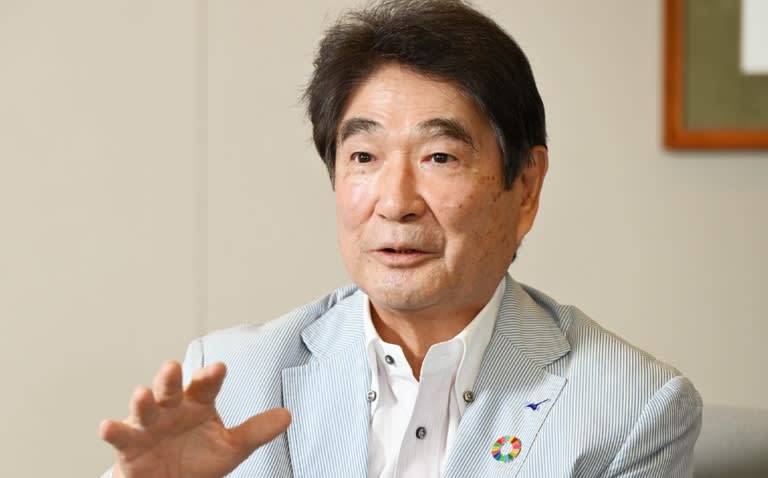 Though the company looks to expand abroad, given Japan's shrinking domestic market, it has struggled to compete with global giants like Nike and Adidas with massive marketing budgets. "It's hard to get customers to choose us based on branding alone," said Akito Mizuno.

The coronavirus outbreak has only added to its struggle. The company usually sees a boost in sales in April when students join scholastic sports at the start of the academic year, and the Koshien baseball tournament also provides big marketing opportunities. But neither have panned out this year due to the pandemic. "Our inventory is piling up," Mizuno said.

For now, the company plans to reduce purchases of new materials in an attempt to slowly adjust product inventory over time. It will also furlough workers to cut costs, and has secured additional financing to increase its cash on hand.

The company has been streamlining its assets in recent years, boosting its capital-to-asset ratio to a record 64% for the year ended March. "We have the resources to keep forging ahead for the foreseeable future," Mizuno said.