SINGAPORE -- Singapore's sovereign wealth fund GIC says Japanese companies need to improve corporate governance, and that it is keen to work with them to help implement reforms.

Formerly known as Government of Singapore Investment Corporation, GIC is celebrating the 30th anniversary of the opening of its Tokyo office. Corporate governance was the central topic at a recent forum held in Tokyo for the anniversary, Lim said.

"While over 80% of firms listed on the Tokyo Stock Exchange's First Section now have two or more independent outside directors, more needs to be done to change the mindset of senior management," Lim wrote. "For some well-known companies, having a large number of outside directors did not prevent the practice of accounting irregularities."

In 2011, GIC sold off most of its holdings in Olympus after the Japanese camera and medical device maker was found to have covered up huge losses for over a decade. Last year, a series of scandals came to light involving global players such as Kobe Steel falsifying data and Nissan Motor admitting to faulty vehicle tests.

Lim said corporate governance in Japan has improved under the Abe government's efforts as part of its growth strategy, and that GIC will support reforms in the companies that it invests in.

"We work closely with both the board and management in areas of capital allocation, growth strategy and enhancing shareholder return," he said.

Although GIC has invested heavily in startups such as Chinese peer-to-peer lending platform Dianrong and Indian e-commerce company Flipkart, it has yet to buy into that sector in Japan. 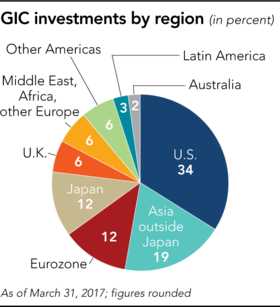 But Lim says he is keeping his options open.

"We find Japan has such vast knowledge of technology and that businesses can take advantage of that for bigger market shares and new products. We are encouraged by this as a global investor."

GIC was established in 1981 to manage Singapore's foreign reserves. Prime Minister Lee Hsien Loong is GIC chairman. His wife Ho Ching is chief executive of Temasek Holdings, Singapore's other wealth fund. GIC would only say that its total assets were "well over $100 billion," but London-based Sovereign Wealth Fund Center estimates its assets under management at around $398 billion.

Japan is a key market for GIC, with 12% of the fund's portfolio allocated there at the end of March 2017, according to GIC's latest annual report. The U.S. still accounts for the biggest slice of investments, at 34% of the portfolio, while 12% is invested in the eurozone, and 19% in Asia excluding Japan.

Besides equities and bonds, the fund is also active in real estate.

"We have been one of the largest foreign institutional owners of real estate in Japan," Lim said.