Germany scrambles to get a grip on Chinese buyouts

HAMBURG, Germany -- German officials are struggling to come up with policy tools that will allow them to get a grip on a surge of Chinese acquisitions of leading German industrial companies.

As of Oct. 13, Chinese investors this year had announced 41 takeovers of German companies, totaling $11.29 billion in deal value, more than the cumulative total for all previous years, according to financial analytics provider Dealogic, whose data dates back to 1995, well before Chinese companies began making significant foreign acquisitions. 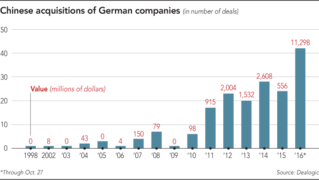 Deals announced since February include the five largest Chinese proposed takeovers of German companies on record, excluding a 2014 restructuring involving units of South Korea's Hanhwa Group. Chinese investors' German deals this year, in both number and volume, also top those of all other European markets except Switzerland, whose total is skewed by China National Chemical's $43 billion bid for seed supplier Syngenta.

The flurry of deal making is generating worries in German policy circles about the outlook for technological leadership, economic development and jobs. Economy Minister Sigmar Gabriel sought to get German or other European companies such as Switzerland's ABB to work together on a counter-offer for Kuka but instead was only able to win pledges from Midea to preserve Kuka's local jobs and stock market listing. Members of Alternative for Germany, a far-right party, have claimed that the deals are eroding Germany's competitiveness and destroying jobs in successful state legislative election campaigns in recent months.

More large deals appear on the horizon. San'an Optoelectronics, a lighting products maker, said Oct. 10 that it was in talk for a potential takeover of Osram Licht, a high-end lighting producer with a market capitalization of 5.7 billion euros and some 18,000 patents. Go Scale Capital, a Chinese private equity fund, is also reportedly considering a bid for Osram. Osram agreed to sell its light bulb and LED lamp business to other Chinese investors in a 400 million euro deal in July. Separately, the parent company of railway wheel maker Bochumer Verein indicated in early October that it is taking with China Railway Rolling Stock about a sale though the value of the possible deal is unclear. These moves are adding fuel to the debate over Germany's openness to foreign takeovers. "The German government should leverage China's hunger for German key technology to smoothen German companies' access to China," said Daniel Bauer, chairman of shareholder association Schutzgemeinschaft der Kapitalanleger. He noted that many of the Chinese takeovers are led by state-backed companies and that some German executives worry that a policy tightening might impact their sales in China. "Berlin should consider the general public good, not only a few major German players' fear of possible retaliatory moves by Beijing."

Bauer's complaints echo those of the European Chamber of Commerce in China, which in a report Sept. 26 noted that Chinese companies were buying out companies in sectors in which China restricts investment by foreign companies, including cars, robotics and critical infrastructure. "While Europe welcomes foreign investment, this lack of reciprocity is unsustainable and could lead to protectionism and increased tension," the chamber warned.

Some though argue that there may be little reason to worry about Chinese buyouts of tech companies. In a report last year, Germany's Mercator Institute for China Studies and U.S. policy research company Rhodium Group concluded, "To date there is no evidence to support the concern that Chinese firms could be buying EU technology assets and then moving related activities and jobs back to China."

"Most Chinese companies are doubling down on Europe and expanding their EU R&D presence and local staff count," the report said, noting that "Chinese companies face a massive shortage of talent at home" as well as weaker protections for intellectual property. Buyouts, the researchers argued, are better for European companies than seeing their innovations copied or government-mandated technology transfers.

Yet other factors are adding to Germans unease. Aixtron's share price plunged, opening the way for takeover bids, in the wake of the last-minute cancellation of a large order last year by San'an Optoelectronics; German press reports have identified intriguing links between San'an and Aixtron buyer Fujian Grand Chip. German railway technology firms such as Siemens and Bochumer Verein have recently lost orders, even from German state railway Deutsche Bahn, to lower priced Chinese rivals, including state-owned China CNR.

Yet while local media have reported in recent weeks that officials from the economy ministry and the office of Chancellor Angela Merkel have stepped up discussions about possible mechanisms to control foreign takeovers, many are skeptical they will have much luck. Alternative for Germany has also not proposed specific measures to restrain Chinese buyouts.

Under Germany's foreign trade law, foreign direct investment is largely unrestricted. An amendment adopted in 2009 gives the government a right to veto the acquisition of more than 25% of any company by non-EU investors if the sale could endanger strategic infrastructure or public order.

Alexander Kutsch, a legal partner with the German firm Roedl & Partner which has advised some of the Chinese bidding groups, said, "Of course, the economy ministry could now be going about extending the foreign trade law's definition of strategic infrastructure and public order all the way to the safeguarding of key technology and then fill this all up with job market-related arguments, but this would run counter to the prevailing judicial interpretation in Germany which very clearly finds that the law's veto right does not apply to deals like the Kuka one."

Many involved in the policy debate believe any German attempt to amend the foreign trade law to further expand the scope of takeover reviews would run up against EU legal restrictions, even though France has taken a broader interpretation of its right to oversee foreign buyouts. "The legal hurdles [to amend the foreign trade law] are too high, and they distract us from urgent and essential political-economic issues," said Gabriel, the economy minister, in an op-ed in June in German weekly newspaper Wirstschaftswoche. He called there instead for new EU takeover review rules.

"In terms of sectors that are or could become vital for the sustainability of the European economy, we should consider measures facilitating the balancing of investors' interests against the EU's industrial-political interests," he wrote. "We have to adjust to the fact that the fields on which the seeds for tomorrow's prosperity and added value are sown have changed."

Yet with many European economies still in the doldrums and coveting the Chinese investment that some Germans are now concerned about, there is little sign that Berlin can put together a consensus in the bloc for policy change.

Volker Treier, deputy chief executive of the Association of German Chambers of Commerce and Industry, doesn't think his government should push either. "Germany has always been short of FDI, and German FDI in China boosts value-added for German suppliers," he said. "So whatever is being thought now politically, it is well advised to keep in mind that Germany's success is built on open markets, and we will shoot ourselves in the foot if we go about limiting our own access situation."