Go-Jek will enter the online content business to consolidate its position as the leading platform for everything from food delivery to payments. (Photo by Shinya Sawai)
SHOTARO TANI, Nikkei staff writerApril 26, 2018 20:37 JST | Indonesia
CopyCopied

BADUNG, Indonesia -- Indonesia's leading ride-hailing app operator Go-Jek will enter the online content business, as it looks to consolidate its position as the leading platform for everything from food delivery to payments.

The service, to be called Go-Play, will be a subscription model, allowing users to choose between daily, weekly and monthly payment plans, according to Michy Gustavia, senior vice president of acquisition and development at Go-Jek, without providing further details. She was speaking at the Asia-Pacific Video Operators' Summit on Thursday.

Go-Jek will also be involved in content creation as well, utilising data it owns like user habits, "to create content that will have positive social impact," said Gustavia.

"One of the first projects we did is we looked at the data of cancelation rates for [female] drivers, there was a high cancelation rate," Gustavia noted, adding that the company produced a documentary on the issue with Indonesian film makers. "They cancel because these were women drivers, they felt women could not drive motor cycles or were not smart enough. And the cancelation rate would directly affect livelihoods, these women are single mothers. The end product is powerful, pretty good that we submitted to several international film festivals."

Go-Jek will also set up Go-Studios, which will produce such documentaries for Go-Play as well as feature films and short films. "Everything will be for Go-Play. Content we produce and co-produce will be exclusively for Go-Play. So it will be like 95% Indonesian focused," Gustavia said. 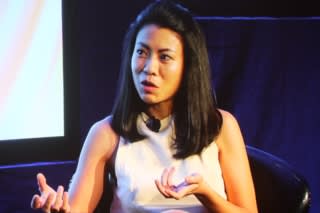 "There is a lot of content and that is why brands matter more than ever. That is where Go-Jek brand comes into play. Consumers have trust [in Go-Jek] especially in Indonesia," said Gustavia. "Our approach is more toward original Indonesian voices as opposed to overseas. We want to really nurture Indonesian talent, film makers and promote Indonesia and Indonesian content."

Go-Jek, which launched its ride-hailing app for motorbike taxis in 2015, has since evolved into a provider and facilitator of a wide array of services -- including food and groceries deliveries, cleaners, as well as bill payments.

The electronic wallet platform it has been developing, Go-Pay, supports the growth of these services by allowing easy and quick transactions. Users of Go-Play are likely to be able to pay for their subscription fees through the payment platform.

The move to expand into the content business comes amid fierce competition in its home country with Singapore-based Grab, which took over the operations of U.S. ride hailing company Uber earlier this month.

Go-Jek will hope that through providing original content within its ecosystem, it is able to consolidate its position within Indonesia as the go-to platform for everyday needs.

Go-Jek said it had 9.7 million unique visitors as of December and is reportedly planning to expand outside its home country -- including to the Philippines.