Indonesia is the region's biggest ride-hailing market and is home to the Singapore-based Grab's key rival, Go-Jek. Their battle is intensifying as both companies transform into service providers far beyond transportation, and e-payment systems are considered essential for corralling users within their digital ecosystems.

A stake in Ovo, Indonesia's leading e-payment platform, promises to help Grab in the Indonesian market.

According to two people familiar with the matter, Grab invested in Bumi Cakrawala Perkasa, or BCP, the company behind Ovo and part of Lippo Group. The investment happened sometime this year, and although the amount is unknown, one source said it was "big enough to have an impact" on decision-making at BCP.

While Go-Jek's mobile wallet Go-Pay has helped it attract and retain customers while building up its portfolio of services, Grab's own payment platform was suspended by Bank Indonesia last year, pending a review by the central bank.

The Singaporean company announced a strategic partnership with Ovo in June, integrating the payment platform into the Grab app. But financial participation will give Grab more say in Ovo's operations and make it easier for the ride-hailer to implement payment strategies.

Ovo, which announced in late June the appointment of former GrabPay head Jason Thompson as its CEO, has been making strides into offline stores, increasing the number of merchants that accept the payment method. Go-Jek is also working to expand its presence at real-world stores, and both companies have been offering promotions like discounts and rebates to entice users.

Grab expects to raise around $3 billion in funding this year, and has said it will spend most of the money on its business in Indonesia. Its latest funding round is said to value the company at $11 billion, while Go-Jek, which is reportedly on a fundraising round of its own, is set to be valued at over $9 billion.

E-payments still represent a tiny fraction of transactions in Indonesia, but the industry is growing rapidly, partly as the government tries to reach the country's vast population of citizens without bank accounts. E-money transactions across the archipelago totaled 31 trillion rupiah ($2 billion) for the first nine months of 2018, nearly triple the figure for all of 2017.

While unicorns -- unlisted startups valued at $1 billion or more -- see a payment method as critical for growth, they have faced stricter regulation by Bank Indonesia this year. In May, the central bank capped foreign ownership in e-money providers at 49%, which may explain why, like Grab, e-commerce unicorns Tokopedia and Bukalapak had their e-wallet services TokoCash and BukaDompet suspended.

The foreign cash that turned Tokopedia and Bukalapak into unicorns seems to have rendered their local ownership status questionable. 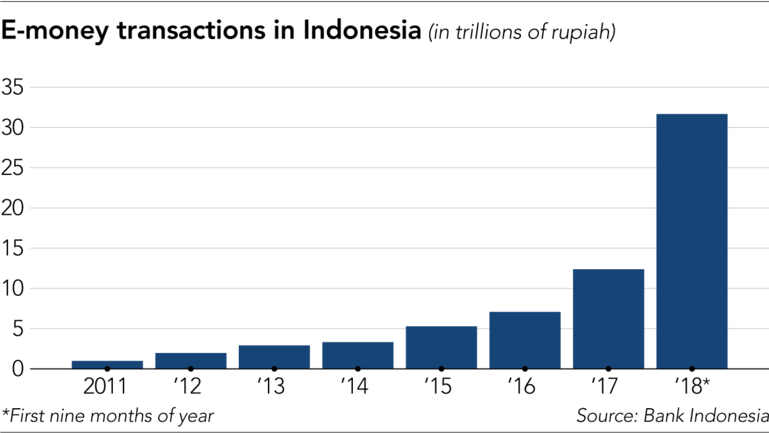 Bukalapak regrouped by teaming up with Dana, an e-wallet partly backed by Ant Financial -- an affiliate of Chinese internet giant Alibaba Group Holding -- and has offered it as a payment option since August. Tokopedia in late October announced that it, too, was partnering with Ovo, replacing TokoCash.

Traveloka, an online travel agent and the fourth Indonesian unicorn, has not formally announced any partnerships with payment platforms but accepts Uangku, an e-wallet provided by local wireless network operator Smartfren Telecom, which is owned by the Indonesian conglomerate Sinar Mas.

Grab and Go-Jek are also partnering with financial institutions in other Southeast Asian countries, as they expand beyond their home markets.

Go-Jek, which entered Vietnam in September through local partner Go-Viet, has tied up with VietinBank to offer a payments service in the country. On Monday, the company announced a "strategic partnership" with Singapore's DBS Bank to work together on payment services in the city-state, as it prepares to tread on Grab's turf.

The Indonesian company is looking to enter Thailand and the Philippines as well, and might seek similar partnerships with local financial companies there.

Grab, meanwhile, announced last week that it had teamed up with Thailand's Kasikornbank and introduced its payment service for its app in the country. This marked "the expansion of [Grab's] mobile wallet to all ASEAN-6 countries," the ride-hailer said in a statement.

Aside from Kasikornbank and Ovo, Grab also partnered with Malaysia's Malayan Banking in May and Vietnamese digital payment service Moca in September. That same month, the company was awarded an e-money license from the Filipino central bank.