Grab's dominance in Southeast Asia will not go unchallenged 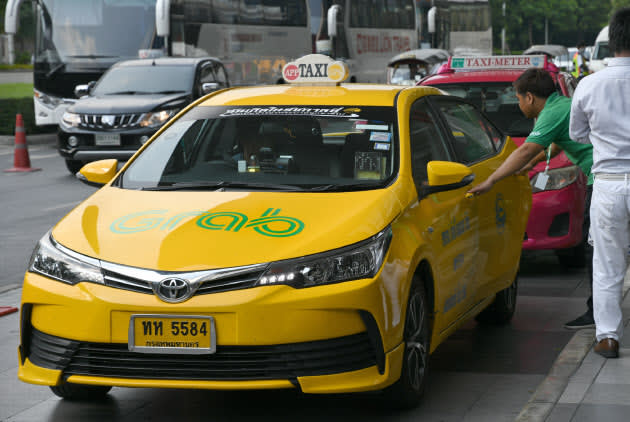 JAKARTA/SINGAPORE -- As ride-hailing services have become indispensable to Southeast Asia's infrastructure, the abrupt rise of now-dominant player Grab has shaken up the industry in the region. With the exit of U.S.-based Uber Technologies, competition in the field is entering a new charter.

Grab announced in March that it would absorb the operations of erstwhile rival Uber in the eight Southeast Asian markets where they had previously competed.

As the war of attrition between Grab and Uber heated up, they faced mounting costs to attract and retain drivers and promote their services. Uber CEO Dara Khosrowshahi focused on cost efficiency, and eventually decided to bow out of the region after taking the reins of the company last year.

But Grab will not go unchallenged, and will need to prepare for competition from new corners and in new fields as it expands beyond its core business.

At the entrance of a mall in downtown Jakarta, shoppers wait with smartphones in hand for motorcycle taxis to arrive from the Singapore-based ride-hailing company Grab, or its homegrown rival Go-Jek. One woman sitting on the back of a motorbike said she books rides almost every day.

Similar scenes play out in cites across Southeast Asia, where smartphones have become ubiquitous. In growing numbers, people summon rides using smartphone apps rather than the traditional methods of flagging down cabs or lining up at taxi stands.

But along with their rapid growth, companies face the challenge of keeping customers happy while managing the social and political implications of their evolving roles. 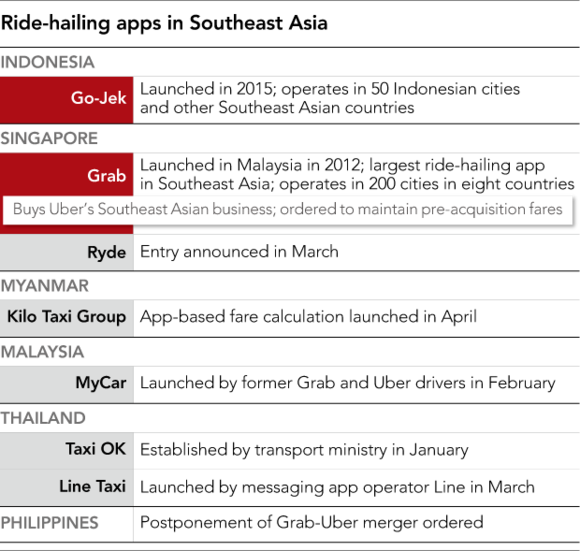 In the region's biggest market, Indonesia, rival Go-Jek has taken off since introducing its own app in 2015. Go-Jek's market share is estimated to be larger than that of Grab, and it is Indonesia's first homegrown unicorn, counting Google among its investors.

Grab, which started out as a taxi-booking app provider in Malaysia in 2012, now operates in nearly 200 cities in eight Southeast Asian countries. Uber entered the region in 2013, and both services skyrocketed, thanks partly to a growing array of transport options, including cabs, private cars, and motorbikes that can weave through the gridlock that plagues many Southeast Asian cities.

A Go-Jek driver in Jakarta buys a coffee that a customer has ordered by smartphone. A Go-Jek driver in Jakarta buys a coffee that a customer has ordered by smartphone.

Ride-hailing services provide a degree of consistency and transparency that customers have come to appreciate. Once a customer selects the pick-up and drop-off locations, the app displays the fares in advance. A trip from central Jakarta to the Indonesia Stock Exchange 7km away costs 24,000 rupiah ($1.74), 30% to 40% less than a standard taxi fare.

According to U.S. research company Frost & Sullivan, ride-hailing services were used a total of 6.1 billion times in six major Southeast Asian countries in 2016. The company estimates the market size at $20.4 billion and sees growth of 6.5% a year through 2021.

A recent survey by Thailand's Assumption University showed that 89% of respondents found such services comfortable and convenient. Similarly, nearly 80% of Indonesians recently polled by Universitas Indonesia said they would be unsure what to do without local market leader Go-Jek.

Yet rivals to Grab's dominance in markets other than Indonesia are already emerging. Japanese chat app provider Line has introduced a taxi-booking service in Thailand, while upstart MyCar started operations in Malaysia in April.

Even Go-Jek, which hasn't yet ventured outside of its home market of Indonesia, is said to be mulling expanding its business to other countries. The Philippines is likely one destination, as the Land Transportation Franchising and Regulatory Board Member Aileen Lizada confirmed to Nikkei Asian Review that the Indonesian company has requested a meeting with the regulator.

The competition goes beyond ride hailing, as companies expand into a variety of other fields in an effort to attract more customers and drivers. Many of these services are not typically found in the developed markets of the West, and represent an evolution for the region's motorbike taxis beyond just transporting people.

During a recent lunchtime in a Bangkok business district, a GrabFood driver was commissioned through the Grab app to drop off three orders of pork and rice. The driver paid for the meals himself before delivering them by scooter to an agreed location. There, he was repaid for the purchase and received an additional 100 baht ($3.20) for the delivery from Grab.

In Indonesia, Go-Jek Food also offers food delivery, one of a wide range of services it provides. Customers can request housecleaning, auto repair, and even massages. CEO Nadiem Makarim describes such services as "game-changers."

The next battleground among these companies may be finance. Much of Southeast Asia's population does not have access to banking services, and paying cash while shopping remains the norm. Just over 30% of Filipinos and Indonesians have bank accounts.

According to forecasts by Capgemini and BNP Paribas, noncash payments in emerging Asian markets are set to swell by an average of over 30% annually through 2020. In Indonesia, the value of e-money transactions jumped 130% between 2015 and 2017.

Such growth entices not only banks into the payments business, but retailers, telecommunications companies and rail operators as well. Drivers for ride-hailing companies in Jakarta demonstrate for government action to have their pay increased.

Drivers for ride-hailing companies in Jakarta demonstrate for government action to have their pay increased.

Ride-hailing companies have also joined the fray. In 2016, Grab launched its GrabPay mobile payment service, expanding it last year to enable payments to restaurants and other merchants. The service will become available throughout Southeast Asia this year. Grab has also made forays into lending to small businesses and providing insurance for drivers.

"Customers' trust in us as a transport brand allows us to look toward the next step as a company -- improving people's lives through food, payments and financial services," said Grab's Tan.

Go-Jek has taken a similar route with its Go-Pay e-money service in Indonesia, broadening its reach from rides to restaurants.

But as ride-hailing services play a growing role in the economy and everyday life, they are coming under social and political pressure as well.

The rapid market shifts are fueling frictions between ride-hailing companies and their drivers. As competition between services swells the ranks of drivers, complaints about poor pay are common.

On March 27, around 1,000 Grab and Go-Jek motorbike drivers rallied in Jakarta to call for government action to have their pay raised to 4,000 rupiah per kilometer from 1,600 rupiah currently. The companies balked at such a steep increase. President Joko Widodo met with the protesters and said he would speak with the companies to try to find a solution.

Grab has 2.4 million drivers throughout Southeast Asia, while Go-Jek has 1 million in Indonesia. Roughly 84,000 passenger cars alone, not counting the ubiquitous motorbike taxis, are registered with ride-hailing services in Indonesia, surpassing the 62,000 cabs. In 2017, the country's largest taxi operator, Blue Bird Group, reported falls of more than 10% in revenue and net profit.

In some cases, the companies are adjusting to the new realities, In Myanmar, for instance, where Grab will be the dominant player after integrating Uber's operations, the company has increased pay for newly registered drivers by 15% to 20%.

NIkkei staff writers Marimi Kishimoto in Bangkok, and Yuichi Nitta in Yangon contributed to this article.