Japanese conglomerate will quit project if it cannot slash its exposure TOKYO -- Hitachi will ask the U.K. government to take a direct stake in the company that is to build and operate a nuclear power plant in Wales which is now 100% owned by the Japanese industrial company. Hitachi expects the U.K. government will invite private British companies to participate and hopes to reduce its own stake to less than 50%.

Nikkei has learned that Hitachi Chairman Hiroaki Nakanishi will shortly travel to the U.K. to discuss the ownership issue and other project terms with British Prime Minister Theresa May.

Hitachi has recently concluded that the risk of proceeding with the Anglesey project, at an estimated cost of more than 3 trillion yen ($27.5 billion), is too great to manage on its own as a private company. It plans to withdraw from the project if restructuring negotiations fall through. Such a move would have significant repercussions for nuclear power policy for both Britain and Japan.

Hitachi acquired complete ownership of the U.K.'s Horizon Nuclear Power in 2012 for 89 billion yen as part of its plan to expand its nuclear business from Japan to foreign markets. It has spent about 200 billion yen preparing for Horizon's first project, the construction of a plant on the Isle of Anglesey in Wales.

Hitachi hopes to lower its stake in Horizon to less than 50% before construction begins at Anglesey. It has requested that the British government take a direct stake in Horizon and then invite local enterprises to invest.

In response to Hitachi's concerns, the British government earlier this month proposed that U.K. interests and Japanese public and private interests join with Hitachi to move Anglesey forward. The three sets of shareholders would each put 300 billion yen into the project, giving each a one-third stake. According to sources, the company and the Japanese government see it as too risky for Japanese interests to retain a majority shareholding and hope that British interests will acquire a controlling stake.

London has been leery up to now of taking a direct stake in any new nuclear construction. Hitachi will likely seek in direct talks a commitment to U.K. government investment as well as to additional support that may be necessary to sustain the operation. 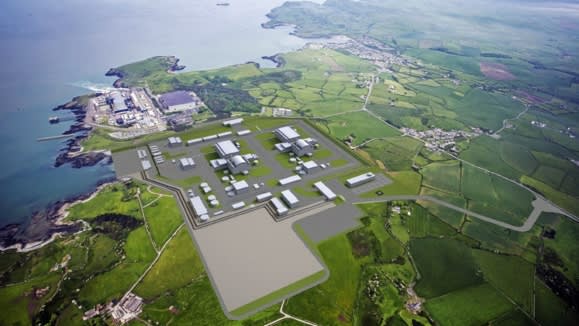 A concept rendering of the nuclear power plant project in Wales where Hitachi has received the order. (Courtesy of Hitachi)

Other key project terms also remain unsettled, including the degree to which London would guarantee the 2 trillion yen in loans Hitachi sees as needed to finance the Anglesey development and the price to be paid to Hitachi for the electricity from the plant. London's proposed price is 20% lower than what Hitachi has requested. The Japanese government plans to guarantee the project's loans.

The U.K. in December approved the design of the reactor that Hitachi plans to use in Anglesey. The project is now in its final pre-construction phase. The company has targeted to begin construction next year.

With its domestic nuclear industry still crippled by the legacy of the 2011 Fukushima nuclear accident, Japan has been eager to promote nuclear exports. The drive for overseas orders however has struggled as many governments reconsider nuclear power's merits.