TOKYO -- One of the biggest news stories in Formula One in 2015 was Honda Motor's return to the highest level of the sport by supplying engines to Britain's McLaren. Many F1 fans were expecting magic. After all, this was a duo that won 44 races in its 1988-1992 heyday. But last year was a bust, with the McLaren-Honda team failing to cross the finish line first in any of the 19 races it started. The Nikkei recently spoke with Yasuhisa Arai, head of motor sports at Honda, about last year's teething problems and how the team is progressing.

A: The season was really tough and we failed to meet expectations placed on us by fans, McLaren and those who provided support to us. There are many reasons for that, but I think the results say everything.

Early in the season, we felt the effects of our seven-year absence from racing. We anticipated technological troubles. And although we recognized them, we failed to quickly pinpoint the causes, come up with measures to resolve them and make the necessary adjustments. We were suffering from what athletes call a "lack of match sharpness."

We participated in our first race of the 2015 season, the Australian Grand Prix, in March last year before mastering the complicated hybrid system (required under current F1 regulations). We all did our best, but a lot of technological troubles occurred before we could capitalize on our collective experience. We got off to a really difficult start.

Q: In its current form, F1 racing is a competition of environmental technologies, with fuel use limited to 100kg and involving small turbocharged engines with displacements of 1.6 liters capable of generating speeds of 300kph. One of the factors pushing Honda back into racing was the desire to hone its green technology. Which technologies have proved the most difficult?

A: When we tested our car in Abu Dhabi one year before [Honda's return to F1], we encountered problems with our electronic control system. We thought resolving those issues would be enough. But during tests in the winter of 2014, we discovered there were a lot of other things we needed to address, such as the problem of cooling temperatures in excess of 1,000 C and regenerating heat energy. The three test runs we conducted before the season proved useless.

Up until the Spanish Grand Prix in May, it was like playing whack-a-mole: As soon as we resolved one problem, another popped up. Though we don't disclose the number of people involved in our F1 team, about half of them are new to the field.

The biggest challenge involved technologies for the system to recycle heat energy and convert it into electricity for use to assist motors. At the summer Belgian and Italian Grand Prix events, called "power circuits" because they involve long straight runs, we recognized we could not catch up with other teams.

Even if we increased the power output of our engine, it would lose some 160 horsepower on straightaways due to the shortage of heat energy. We needed to carry out a complete review of the basic hardware design, but we couldn't do that during the season.

In the second half of the season, we tried other approaches to improve our performance as much as possible. But we had a tough time. Honda faced the same problems that other teams did after F1 rules were changed in 2014.

Q: What are you doing to fix your technological problems?

A: Last August, we began studies on an engine aimed at thoroughly resolving our problems for the 2016 season at our laboratory in Sakura, Tochigi Prefecture. I couldn't say we would definitely find solutions within a year. Members of our development team have been extremely busy, because they were simultaneously working to improve our power unit in 2015 and drastically reworking designs for 2016. Our U.K. development center in Milton Keynes serves as our front-line base for racing; all projects for engine development are being undertaken at the Sakura lab.

Q: There was a lot of press about tension between Honda and McLaren last season.

A: We thoroughly discuss problems until we see eye to eye. The talks are neither cozy nor confrontational. Sometime around last summer, they asked if we had sufficient [development] resources and wanted to know why we were doing things exclusively on our own. They also asked us to use outside personnel, which from their perspective is natural given the high job mobility in Europe.

But we explained that Honda has a different philosophy. It's important to nurture manpower. It isn't acceptable to us to have an outside engineer stay for just three months or half a year.

Q: Some analysts say that the technological troubles you encountered stemmed from McLaren's "size zero" concept, which called for an extremely small power unit. Do you intend to make any size changes in 2016? 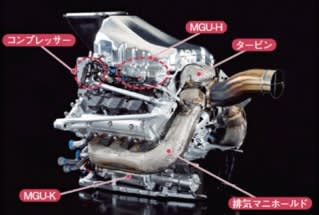 This V-6 direct-injection turbo engine has a displacement of 1.6 liters and two motors, the MGU-K and the MGU-H.

A: No. F1 cars cannot go fast without proper consideration given to air resistance and the way suspensions move. It's important to minimize the size of power units so that they don't interfere with the car's design. ... McLaren once told us that we don't have to be aggressive in downsizing our power unit. But we are determined to shrink the size by whatever means possible.

Q: Despite all the difficulties your team had, you often sounded positive last season.

A: If a person in a key position talks about negative things, the entire team becomes negative. Amid our difficulties, I wanted members of our team to think about what action they should take and recognize that they were doing meaningful work. All of the team members, from novices in their 20s to veterans, desperately tried to fix problems. I speak positively because I understand and trust them.

Q: What specific plans do you have for 2016 in terms of budget and personnel?

A: We don't disclose details about that. I can't even talk about percentage changes. But we have been considering the budget and team size since last summer. I've talked with [Honda] President Takahiro Hachigo and received his pledge for full support; we are ready for the 2016 season.

Q: At a time when development costs for next-generation mass-production cars are swelling, is Honda's involvement in F1 impacting the company's business? A: We conduct two test runs every Friday, another two on Saturday and one more on Sunday for a total of five runs per week. Using sensors, we monitor for problems and generate a huge amount of data. We immediately find the causes of any problems and fix them. Then we repeat the process all over again.

This process naturally generates top-notch engineers and corporate managers. Trained under extreme conditions, these people will become Honda's core manpower in the future. The work is meaningful in the long run.

Our involvement in F1 also serves the symbolic pillar of Honda's branding strategy.

Q: But your brand value could drop if you fail to produce results. Are you confident about 2016?

A: We're keen to meet everyone's expectations and reach the podium as soon as possible. We will resolve the technological problems we failed to address in 2015 and will head into the opening race with confidence.