Huawei hits out at claims of state control through 'employee' stake HONG KONG -- Huawei Technologies on Thursday hit out at allegations that its employee ownership structure, where workers' shares are held through a Communist Party-approved trade union, is a smoke screen for de facto state control.

"Huawei is owned by its employees," said Jiang Xisheng, chief secretary of the board at Huawei. "No government agency funds the company or holds its shares. As a result, the enterprise operates independently while achieving steady long-term growth."

The Chinese company was responding to an academic paper published in the U.S. last week by professors Christopher Balding and Donald Clarke, who questioned Huawei's claims to be an independent enterprise, majority-owned by staff and free of state control. They argued that Huawei's "employee shares" are only profit-sharing interests. As all unions in China must be part of a Communist Party-run labor federation, Huawei should be regarded as "effectively state-owned," they wrote.

The research paper has caused a stir as Huawei's relations with the Chinese government have come under close scrutiny amid a U.S. campaign to brand the company a threat to national security. Washington has pushed its international allies to bar the unlisted company and fellow Chinese manufacturer ZTE from telecom networks while Beijing has accused the U.S. of trying to quash competition from cutting-edge Chinese technology. 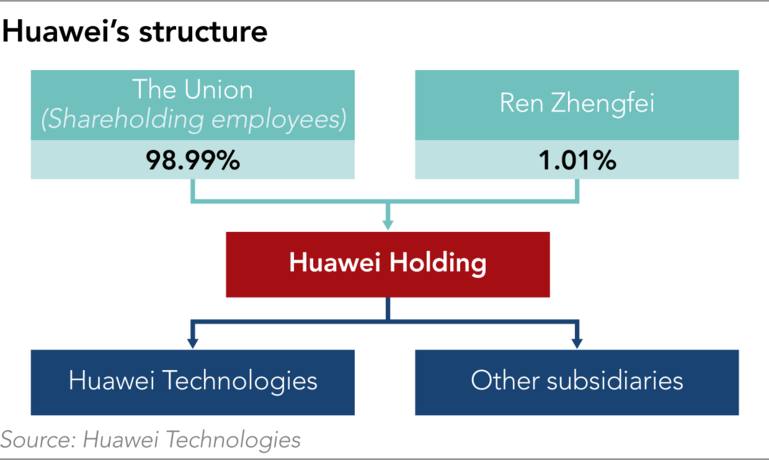 Huawei has long been seen as secretive about its inner workings, leading to speculation about state influence, in part because of founder Ren Zhengfei's past service in the Chinese military.

Jiang told the Nikkei Asian Review by email that Balding, an economics professor at Fulbright University Vietnam, and Clarke, a Chinese law specialist at George Washington University, had misunderstood the company's ownership.

"They build their case by citing various facts and Chinese laws," Jiang said. "But their analysis is marred by an incomplete understanding of Huawei's corporate policies and a limited knowledge of its ownership structure."

His comments to Nikkei were made as the company held a news conference on Thursday morning in its home base of Shenzhen to rebut the claims.

The chief secretary said the employee ownership structure had come into being when Huawei was founded in 1987 because "the company had neither talent nor money. Chinese banks wouldn't lend to a startup, so the company had no choice but to distribute shares to employees as a way to attract talent and generate capital."

"While Huawei employees are not registered shareholders as defined by law, they are the actual owners of the company," Jiang insisted. Their shares generate dividends, give employees a voting interest in the company's governance and would translate to a share of the company's assets if it were liquidated, he told Nikkei.

From the beginning, Jiang said, employees had paid for Huawei shares with their own money "which goes to Huawei as equity capital to fund the company's long-term growth."

Employees elect a representative commission which in turn elects the company's board of directors and supervisory board. In a presentation document from Thursday's news conference, Huawei insisted that Ren's authority over the company is limited by those bodies and noted his own equity stake is only around 1%.

According to Jiang, the most recent election of the representatives' commission took place in January, with 86,514 shareholding employees voting to elect 115 representatives at 416 global polling stations. The presentation said that as of Dec. 31, 96,768 staff had participated in the "employee shareholding scheme" at some point.

Jiang did not elaborate as to whether there was any competition for these positions, however. The Chinese government and Communist Party also hold elections at various levels, but these are generally seen as controlled and not actually democratic.

The reason employee shares are held through The Union of Huawei Investment & Holding Co. Ltd., Jiang said, is that limited liability companies like Huawei can have no more than 50 shareholders under Chinese law. The union committee, he said, thus acts on the one hand to pool staff ownership interests while also fulfilling a requirement under China's trade union law to have such an entity as a means to protect worker rights.

This structure had been used previously by Chinese private companies such as Ping An Insurance Group and property developer China Vanke, he said.

According to Huawei's presentation, the company funds the group's normal union activities which are overseen by a seven-member committee. The representative commission in parallel implements the share ownership system, with all capital contributed by staff.

"More important than the specific legal structure is who exerts control at Huawei," he said. "Believing Huawei would defy Beijing defies credibility. With the Communist Party actively overseeing and enforcing regulations and state interests abroad, it simply does not match the facts of Chinese interest in promoting companies and interests abroad that Huawei could refuse to assist [the government] if asked."