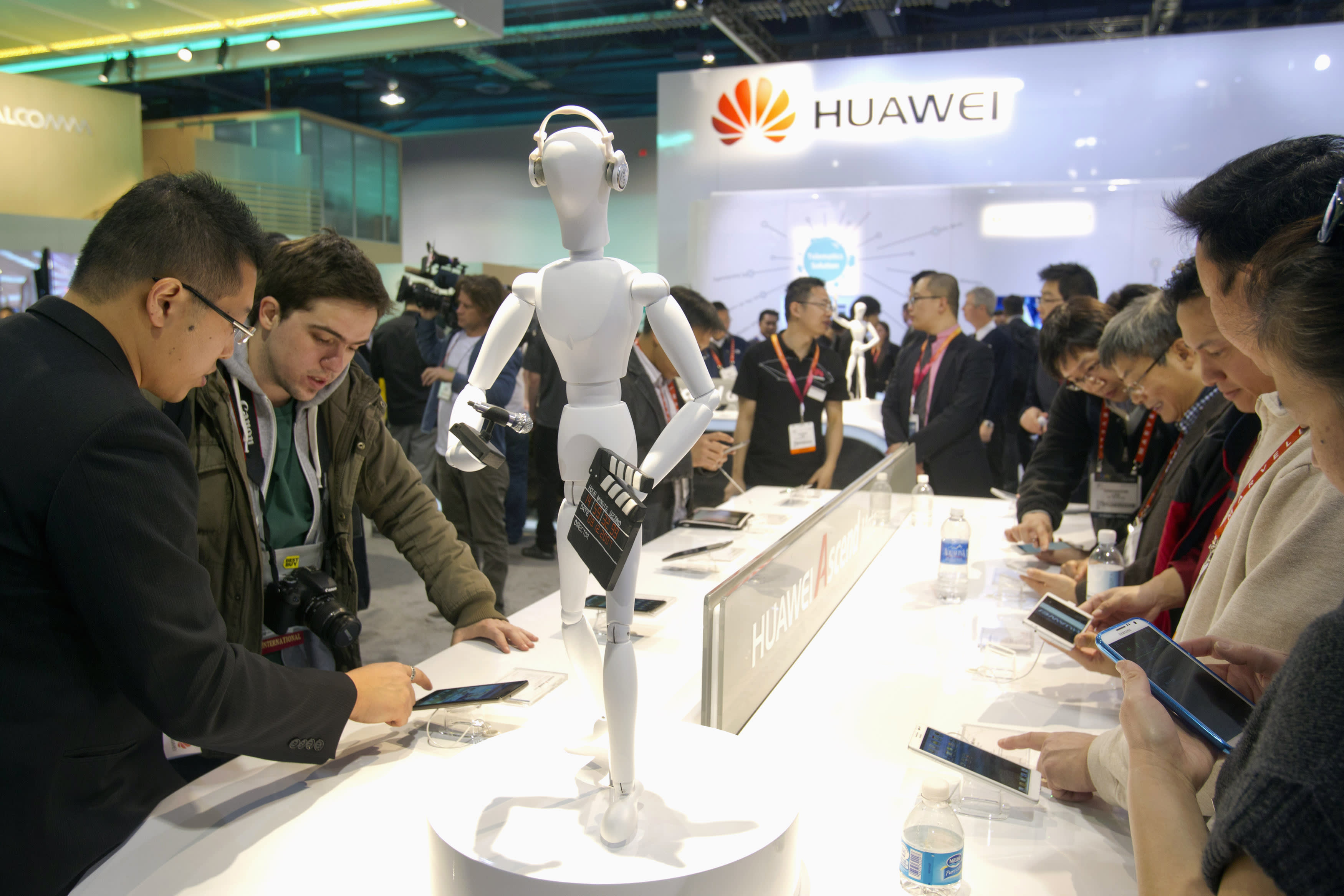 TOKYO -- Huawei Technologies has jumped ahead of Apple in quarterly smartphone shipments for the first time, moving into second place behind Samsung Electronics.

The Chinese company has steadily raised its international profile while also expanding its presence in its home market. Now, Huawei and Chinese peers like Xiaomi are challenging the likes of Apple and Samsung for a shrinking global pie.

Huawei's shipments in the second quarter of 2018 jumped 41% to 54.2 million units, from 38.5 million during the same period of 2017, data from IDC Research shows. Huawei expanded sales not only in its home market but also in advanced economies, with quality cameras bolstering the reputation of its phones.

Huawei's market share reached a record 15.8% in the quarter, a sharp increase from 11.0% a year earlier.

Apple, meanwhile, shipped 41.3 million iPhones in the second quarter of this year. The difference in momentum is clear: The U.S. giant managed only a 0.7% increase on the year, from 41 million.

"The continued growth of Huawei is impressive, to say the least, as is its ability to move into markets where, until recently, the brand was largely unknown," said Ryan Reith, program vice president with IDC's worldwide mobile device trackers. 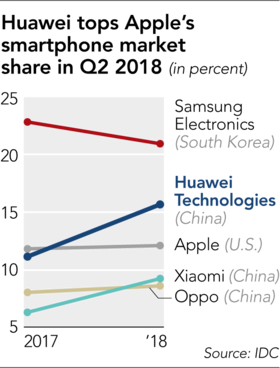 Overall, IDC said smartphone makers shipped a total of 342 million units in the second quarter, a 1.8% on-year decline from 348.2 million. This marks the third straight quarter with a year-on-year decrease.

IDC partly chalked this up to churn in highly penetrated markets.

Another reason is that Samsung has stalled. The South Korean conglomerate retained its top position in the quarter, but its shipments fell by 10.4% to 71.5 million, from 79.8 million a year earlier. It suffered steep drops in two huge markets -- China and India.

In China, Samsung has struggled to compete with domestic rivals. South Korean media reported that it once had a 20% share of the Chinese market, but the figure was down to a mere 1% in the fourth quarter of 2017.

In India, Samsung had been the top player but was surpassed by China's Xiaomi in the fourth quarter of last year, according to IDC.

As for Apple, the company announced on July 31 that its net income reached $11.5 billion in the April-June period, a 32% surge from the previous year. While total iPhone sales grew only marginally, sales of the high-priced iPhone X were stable.

IDC's Reith pointed out that Apple is likely in for a holiday sales boost following its annual product refresh. "It's likely we'll see continued movement among the top ranked companies in 2018 and beyond," he said.

"For most markets, the ultrahigh-end competition is largely some combination of Apple, Samsung, and Huawei, depending on the geography, and this is unlikely to change much in the short term," Reith added, referring to phones in the $700-plus range. 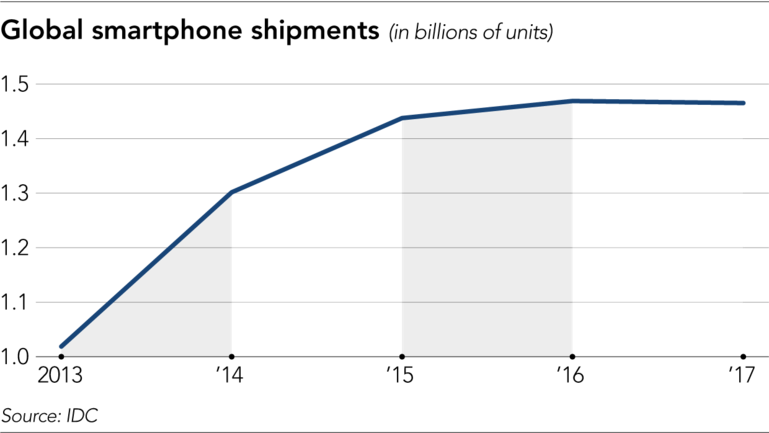 Huawei is putting up more of a fight in developed markets like Japan.

In June, a crowd gathered around a Huawei booth at electronics retailer Bic Camera's store in Tokyo's Ginza district. The attention magnet was the P20 series, which packs three high-quality cameras into one phone, along with other advanced imaging functions.

"I use a Japanese brand, but this camera is better than mine," said a woman after listening to the sales pitch. "Chinese makers seem to be good recently."

One risk for Huawei, though, is the escalating trade war between China and the U.S. The company had planned to sell its phones to American consumers through AT&T, but the major carrier nixed the deal ostensibly over security fears.