Idemitsu founding family crosses a line with the Saudis 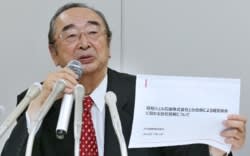 TOKYO -- Idemitsu Kosan's founding family is treading on treacherous ground as it attempts to block a planned merger with Showa Shell Sekiyu.

The family's opposition to the deal, struck last November, has baffled the rest of the Japanese oil industry and apparently riled Saudi Arabia, the world's largest oil exporter. The future of Japan's second-largest oil distributor hangs in the balance.

Speculation about Saudi anger has swirled in the Japanese oil sector since the family's stance came to light in late June. Saudi Arabian Oil Co., better known as Saudi Aramco, the kingdom's state oil company, is Showa Shell's No. 2 shareholder, after Royal Dutch Shell. The Saudi company intends to retain a stake in the new entity created through the Idemitsu-Showa Shell merger. Under the proposal, Idemitsu would buy Showa Shell shares held by Royal Dutch Shell.

But in a document released on June 28, the founding family said it would be "inappropriate" for Idemitsu, which has close ties to Iran, to enhance its relations with Saudi Arabia and become affiliated with Aramco.

This struck many as bizarre, given that Idemitsu already gets 40% of its crude from Aramco. Iran, Saudi Arabia's archrival, accounts for just 1%.

Showa Shell, in fact, buys more oil from Iran because it has refining facilities suitable for treating that country's crude.

Daisuke Seki, an Idemitsu executive vice president, has denied rumors that the company received a protest letter from Aramco. But he nevertheless acknowledged the need to "offer an apology" to the Saudi company.

The founding family likely has other, more important concerns, such as Idemitsu's and Showa Shell's different corporate cultures and the expected decline in the family stake. It was unnecessary -- some might say downright reckless -- to declare, in effect, that Idemitsu is an ally of Iran. In January, Saudi Arabia severed diplomatic ties with Iran. Tensions between the Middle Eastern powers, which face each other across the Persian Gulf, are fueling the current turmoil in the region.

Japan depends on Saudi Arabia for 30% of its overall oil imports. The last thing Japanese companies should do is alienate the kingdom by seemingly siding against it.

From a business perspective, too, there are reasons to question the family's opposition. Takeo Kikkawa, a professor at the Tokyo University of Science and an expert on the oil industry, said Idemitsu and Showa Shell make a good match.

"Idemitsu is building a refinery in Vietnam and has sent a team of oil traders to Singapore," Kikkawa said. "Showa Shell has been competitive in oil trading in Asia, probably because of information from Aramco." A merger, he argued, would give Idemitsu access to that valuable information and provide a springboard for becoming an Asian oil company, rather than a primarily Japanese one.

The new entity would buy oil from both Saudi Arabia and Iran, and ought to take advantage of its relationships with both countries, Kikkawa went on to say.

"From the viewpoint of resources diplomacy, it is a taboo for a consumer country to criticize a producing country."

The Idemitsu imbroglio comes at an awkward time for Japanese industry.

The sharp decline of oil prices over the past couple of years has prompted Saudi Arabia, the leader of the Organization of Petroleum Exporting Countries, to embark on radical economic and social reforms. Spearheading this drive is Deputy Crown Prince Mohammed bin Salman, who has control of numerous policy levers -- from diplomacy to economy to oil.

The young prince has made some risky moves on the foreign affairs front, including the intervention in Yemen's civil war and the decision to cut ties with Iran. But his reform agenda is raising hopes, especially among young Saudis, that the country has a less oil-dependent future. 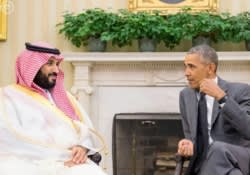 The agenda is said to have been designed by a U.S. consulting company. It includes measures to create a market-oriented economy, such as privatizing state-owned companies and creating jobs by nurturing new industries. All this, in turn, promises to open up new business opportunities -- opportunities Japan does not want to miss.

Soon after Salman unveiled his blueprint, General Electric CEO Jeffrey Immelt traveled to Saudi Arabia to announce plans to invest up to $3 billion in the country's energy, aerospace and other industries. In June, the deputy crown prince visited the U.S. and met with business leaders in Silicon Valley, as well as President Barack Obama.

U.S.-Saudi ties have been strained by the Obama administration's Middle East policy. But American companies are lining up to capitalize on the Saudi reforms. "Japan is far behind," warned one Japanese government official.

Japan is going to need Saudi Arabia as long as oil remains a major energy source. The International Energy Agency has predicted that shale oil output in the U.S. will peak in the 2020s. Excess oil production capacity will then be concentrated in OPEC nations, Saudi Arabia in particular.

As a result, supporting the Saudi reforms and boosting Japan's presence in the country is a key strategic challenge. The Japanese government is trying to build working relations with Salman and the Saudi energy minister, Khalid al-Falih.

For now, Japanese residents of Riyadh say local media have not paid much attention to the conflict between Idemitsu's management and founding family. But Idemitsu should not underestimate the damage that could result from upsetting the Saudis. It needs to smooth things over -- fast.