Ikea set to invest more than $1.5bn in India and plans 25 stores

"We didn't [just] open an Ikea store, we opened a long-term relation for the next 100 years, 200 years," Juvencio Maeztu, Ikea's chief financial officer and deputy CEO, told the Nikkei Asian Review in an interview on Wednesday.

"The important thing for us was to have an affordable range, so we decided to spend a lot of time meeting consumers, meeting people at [their] homes ... to understand what they need, what they want, what are their dreams and frustrations -- based on which we started to develop suppliers," Maeztu said, adding that acquiring the land to build such a massive store also took time.

"So the important thing is not to open the store, but to secure everything in the foundation. Now we are ready to go faster," he said.

The company chose Hyderabad for its first Indian store due to its proximity to the information technology hub of HITEC City and easy access to public transportation. Ikea has invested close to 10 billion rupees in the store and recruited about 1,000 workers, half of them women.

Ikea will have to satisfy local needs to grab a slice of a retail market that the India Brand Equity Foundation says will grow to $1.3 trillion by 2020 from $672 billion in 2016, amid rising disposable incomes, urbanization and behavioral shifts.

For Ikea, one of the keys to cracking the market is pricing. Of the 7,500 products stocked, about 1,000 are priced under 200 rupees and include candles, cups and mugs. Keeping prices low in India, where annual per capita income is just below $2,000, was likely the biggest challenge, even for a retailer that emphasizes affordability.

The Hyderabad store "is a good start," said CEO Jesper Brodin at an event at the outlet a day before the opening. Highlighting the company's long-term commitment to India, Brodin said, "Now, we begin a journey together," adding that the retailer must be accessible to people. 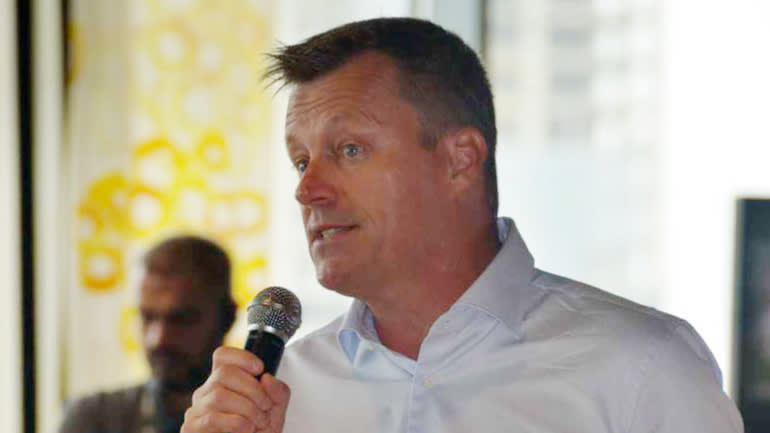 Ikea CEO Jesper Brodin speaks at an event at the chain's Hyderabad store on Aug. 8. (Photo by Kiran Sharma)

Ikea's next Indian store will open in the financial hub of Mumbai in 2019, followed by locations in the southern city of Bangalore, and Gurgaon near New Delhi.

The company will also launch its Indian e-commerce business next year in a bid to tap a growing online market now dominated by homegrown Flipkart and U.S.-based Amazon.com.

American retail giant Walmart plans to acquire Flipkart in a $16 billion deal that is facing opposition from local brick-and-mortar retailers.

"We will do more investment in the future," Maeztu said, without giving a figure. Six years ago, he said, "We had a plan, and now our plan is bigger than that. Now we have an ambition to go online, ambition to go for smaller formats in cities. With [the Hyderabad] store we have a good base, and now we will add e-commerce and smaller city-center stores."

In its last financial year, Ikea invested 3.1 billion euros ($3.6 billion) in its stores, distribution and shopping centers worldwide. "We are more or less in the same figure [this fiscal year, ending Aug. 31]. We are committed [to the] same or more next year," Maeztu said, adding that in addition to India, the furniture chain will invest more in countries such as China and the U.S.

Ikea, which now has more than 70 suppliers in India, has made more than 350 million euros of purchases from local companies. "We aim to double that amount in less than five years," Maeztu said. "A part of the sourcing will be for Indian stores, and a part for outside India."

Spread over 37,000 sq. meters, Ikea's Hyderabad store houses a 1,000-seat cafeteria serving local dishes, but not Ikea's well-known meatballs, which will be replaced with chicken and vegetarian versions to accommodate Hindu and Muslim shoppers.

In the Indian furniture market, online sellers such as Urban Ladder and Pepperfry -- which also have some offline stores -- are popular. Ikea's entry into the market will surely increase competition.

Ikea arrives as home furnishings in India change from nondescript and utilitarian items to lifestyle products. It began construction on the Hyderabad store in 2016, four years after India introduced reforms allowing 100% foreign direct investment in single-brand retailing and 51% in multibrand retailing.

Ikea has been sourcing from India for three decades. Before opening its first store in the country, it studied hundreds of homes to make its products appeal to Indians.

The country's customers, meanwhile, are unaccustomed to Ikea's model of selling furniture, which entails taking the purchase home and assembling by oneself. The company has thus tied up with mobile-based services marketplace UrbanClap to offer furniture assembly in Hyderabad.

Ikea had 403 stores in 49 countries at the end of its last fiscal year in August 2017, receiving 936 million visitors and generating sales of $44.4 billion.

"Our main priority is to create an inspiring and safe experience for both customers and co-workers," Ikea Retail India CEO Peter Betzel said in a statement announcing the new launch date. "Opening the first Indian Ikea store in Hyderabad means a lot to Ikea, and we want to offer the best possible meeting with Ikea for the many Indian customers."