Weak spending pervades the economy, from steel to consumer products 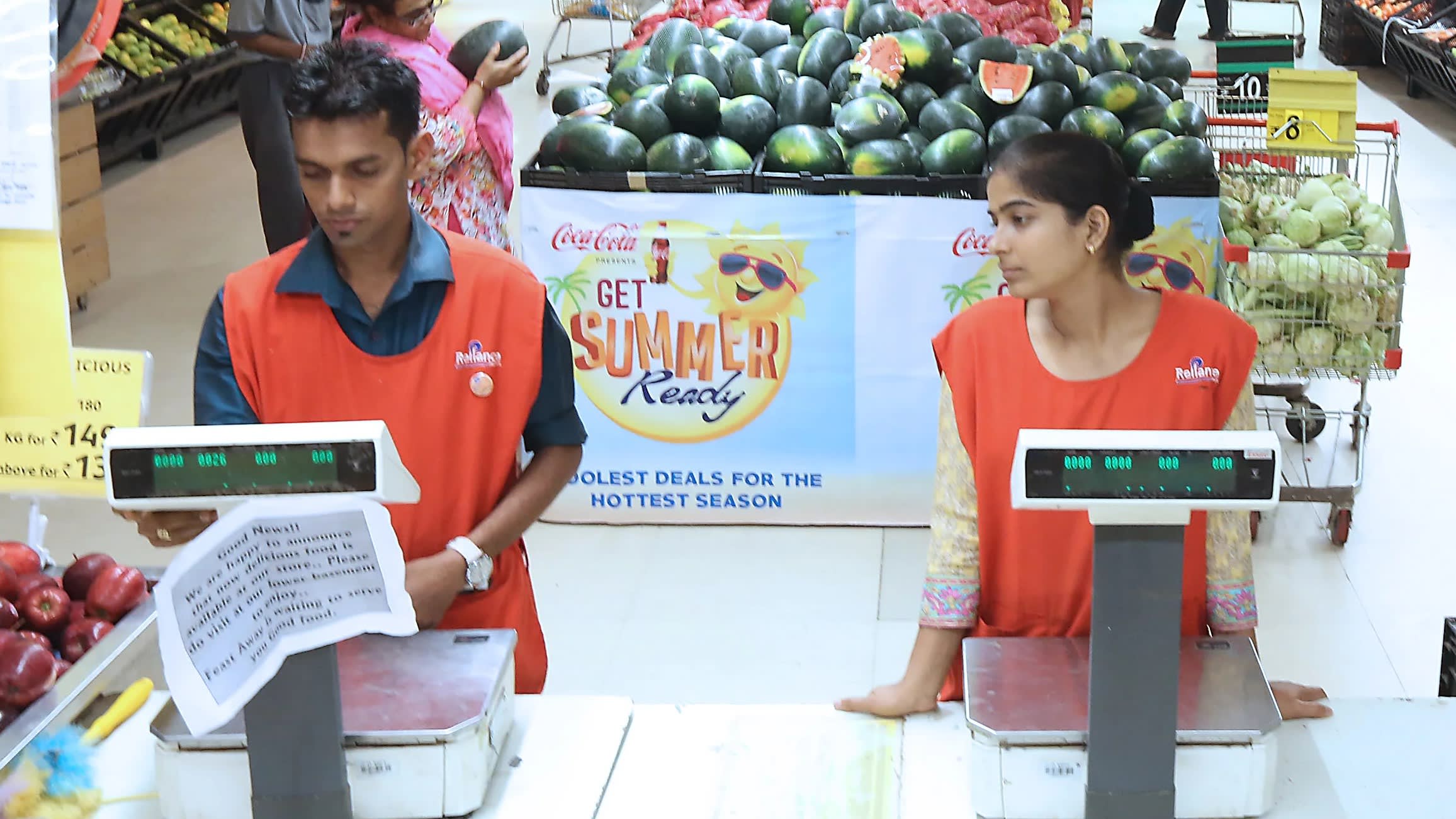 The decline reflects sluggish domestic consumption and the global economic slowdown. Lackluster earnings, in turn, may lead to a prolonged slump in corporate investment and job creation, weighing on economic growth for longer than expected.

A recent survey by Care Ratings of 2,574 listed nonfinancial companies showed their aggregate net sales in the June quarter grew 2.7% on the year, while net profits fell 11.9%.

The last time India Inc. saw such poor earnings was in the last three months of 2016, according to Reserve Bank of India data covering 2,700-2,800 listed nongovernmental, nonfinancial companies. The economy at the time was still recovering from a domestic slump.

The last time those companies posted a double-digit decline in net profit was a 23.1% fall in July-September 2017, when the introduction of a uniform goods and services tax in July seriously disrupted economic activity.

In the January-March quarter, revenue growth at nonfinancial companies was a solid 8.1%, while combined net profit rose 12.5% on the year, according to Care Ratings' survey of 2,172 companies. Figures from the Indian central bank showed revenue growth of 7.5% for the quarter and net profit jumping 42.6% based on a different sample. Both sets of data point to rapidly falling corporate earnings in the June quarter. Even top blue chip companies had a difficult quarter. Of the 21 nonfinancial companies in the 30-issue Sensex stock index, six had falling revenues, while nine saw their net profits shrink. Struggling companies come from a range of sectors, but the auto industry's slump is especially deep, weighing on the broader economy.

Maruti Suzuki India, India's largest carmaker and a Sensex component, posted a 31.7% decline in net profit, year on year, in the June quarter to 13.76 billion rupees ($190 million) on a 12.2% drop in sales. Mahindra & Mahindra and Tata Motors also saw big falls in both their top and bottom lines.

Industry executives and analysts attribute the drop in demand for cars to a credit crunch triggered by a crisis in India's nonbank financial sector, as well as tougher environmental regulations and higher insurance and registration costs.

Since last September, banks have been tightening credit to nonbank lenders, which in turn have cut back on lending to subprime borrowers for cars and houses. "Roughly 10% to 15% of those who would have got loans are not getting loans," said Pawan Goenka, managing director of Mahindra & Mahindra, in early August. 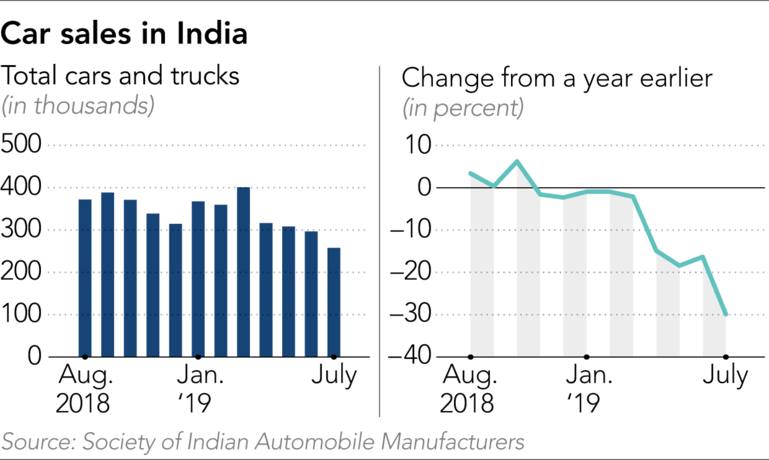 With manufacturers such as automakers selling less, the steel industry is bearing the brunt of falling demand. Its problems are exacerbated by weaker global prices. As the U.S. takes a harder line on steel imports, South Korea and Japanese steel-makers have shipped more to India until recently, worsening the domestic glut.

Tata Steel's net profit skidded 63.6% on the year, with the company blaming weak demand from the auto industry, domestic price declines, weakness in its European business and higher prices for imported raw materials.

"The problem is less about international steel flows and more about domestic demand," T.V. Narendran, chief executive of Tata Steel, told reporters in early August. "Steel touches all parts of the economy. Twenty percent of the steel gets consumed in the auto [industry] and that has an impact," Narendran said.

Sanjiv Mehta, chairman of Hindustan Unilever, did not sound bullish at the company's latest earnings announcement in July, despite decent revenue and profit growth in the June quarter. "Rural consumption is not growing as fast as it should be," Mehta said. "We expect demand to be soft in the coming months."

Britannia Industries, a big confectionary and dairy food maker, said its net sales rose 5.9%, year on year, while its net profit slipped 2.8% for the June quarter, turning in its worst performance since the July-September quarter of 2017, when India introduced a goods and services tax.

"We have never seen this kind of a slowdown," said Varun Berry, Britannia's managing director, during an earnings call early August. "If the consumer is thinking twice before buying even a 5 rupee product, then there is some serious issue in the economy." Berry also sounded a warning over the decline in rural household incomes and nationwide asset-price stagnation. 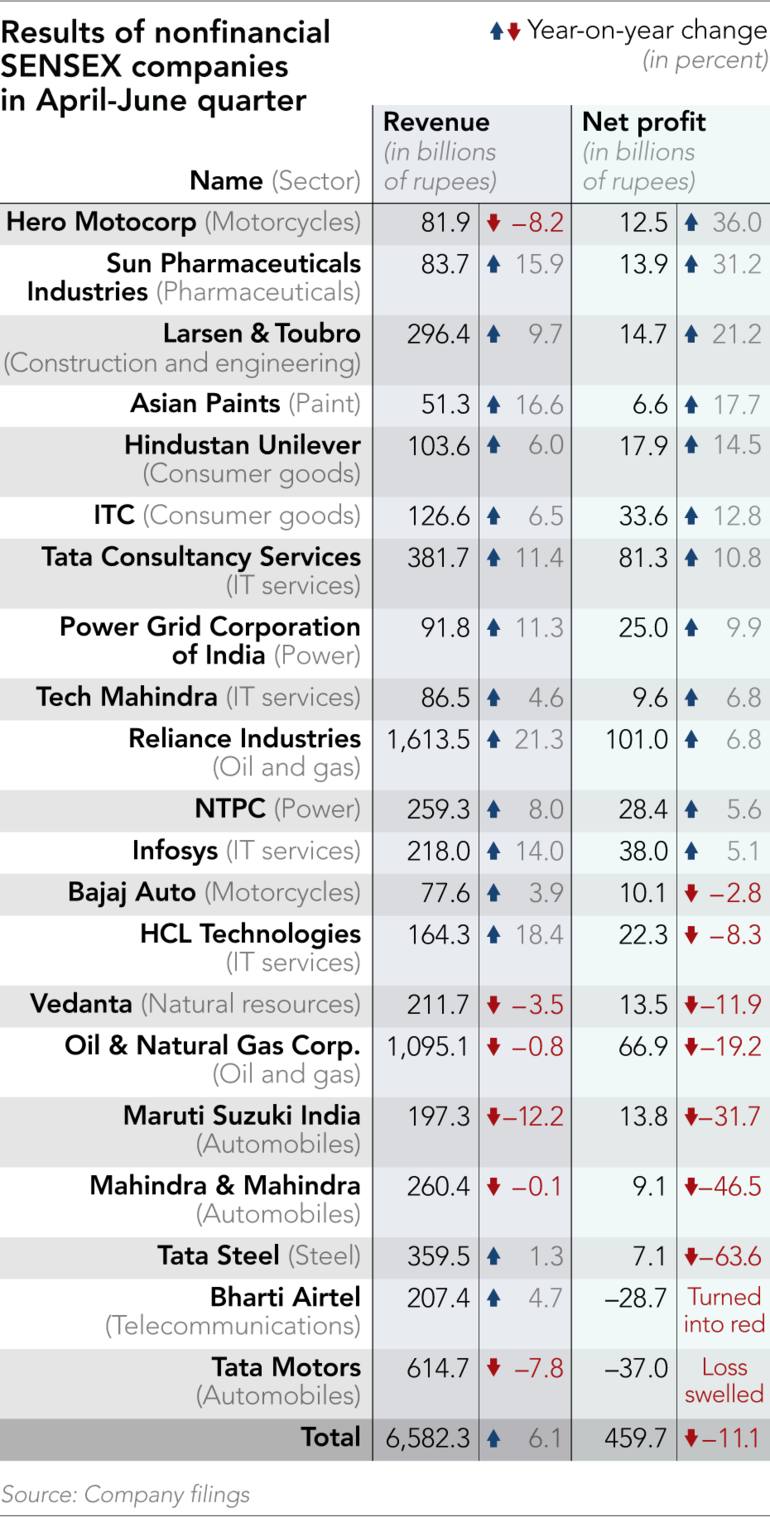 India's globally competitive information technology services industry is one of the few sectors propping up overall corporate earnings. In the Care Ratings survey, total June-quarter revenues at 140 IT services and software companies rose 9.8% on the year, while net profits were up 5.5%.

The big IT companies' main markets are the U.S. and Europe, which insulates them somewhat from the domestic economic cycle. And in recent quarters in particular, corporate investment in new areas -- internet of things, big-data analytics, artificial intelligence -- is finally taking off.

"IT investment used to be the first budget item to be cut in down business cycles, but today companies cannot cut their investments in new technologies because they are vital for their competitiveness," Rajesh Gopinathan, chief executive of TCS, told the Nikkei Asian Review in July.

But apart from the IT sector, the picture is grim. Companies may fall into a vicious circle of reduced investment and hiring, leading to further declines in domestic demand.

The slowdown has cost the auto industry at least 345,000 jobs in recent months, according to the Society of Indian Automobile Manufacturers, as dealer showrooms have closed and manufacturers cut production. On Aug. 27, Maruti Suzuki India Chairman RC Bhargava said the carmaker has decided not to renew the contracts of around 3,000 workers.

Tata Steel's Narendran said on Aug. 24 that the company has slashed its capital spending forecast for the financial year ending in March 2020 from 120 billion rupees to 80 billion rupees.

Prime Minister Narendra Modi has repeatedly touted his second-term economic target of lifting India's gross domestic product to $5 trillion by the fiscal year through March 2025, but reaching that goal will require growth of at lease 8% for the next five years.

India's April-June GDP figures are due out Friday. The previous quarter, GDP rose an inflation-adjusted 5.8%, the first time growth has fallen below 6% since the April-June quarter of 2017.

As of Aug. 20, the consensus forecast was for 5.5% to 6.0% growth in the June quarter, according to the Business Standard newspaper, down from more than 6% in late July.

Nomura's Nandi points out that so far, the government has refrained from taking an "adrenaline shot of fiscal stimulus," partly due to funding limitations amid tax revenue shortfalls. "That is the right thinking, because consumption-based fiscal stimulus will only have a short-term effect and the fiscal space is limited, while what India needs is structural reforms that would encourage corporate investment," Nandi said.

India Ratings and Research principal economist Sunil Kumar Sinha agrees. The stimulus measures announced by the government so far "will take their own time to percolate and revive economic activity. So at least for next two to three quarters, I don't see much rise in the demand pattern. And I don't think even growth is likely to bounce back. It will take time," said Sinha.