BANGKOK/NEW DELHI -- China's Oppo has quietly rolled out a new spin-off in India, as it aims to diversify and counter pressure from its Chinese rivals in one of the world's fastest-growing smartphone markets.

The move came to light as Li Bingzhong, Oppo's senior executive in charge of overseas sales, said recently that he had left the company to develop the Realme brand. Realme was recently registered in China as a separate company, but is backed by one of Oppo's investors.

"Realme will provide smartphones with trendy designs and strong functions to global young customers," Li wrote on Sina Weibo on July 30, a Chinese social media platform similar to Twitter. Li's post was shared by Chen Mingyong, the founder of Oppo.

Observers believe the spin-off indicates how Oppo intends to expand its market coverage amid intensifying competition from other Chinese companies.

Last year, Chinese smartphone makers won a collective market share of 53% in India, up from 34% a year earlier, according to market intelligence provider IDC. Xiaomi, a smartphone producer in Beijing, overtook Seoul-based Samsung in smartphone shipments to India during the last quarter of 2017 and has maintained that position since. With its rising presence in India, Xiaomi also started having its handsets assembled in the country by Taiwan's Foxconn in 2015. Xiaomi now plans to have 95% of its handsets sold in India made there, too, an approach that might help the Chinese smartphone makers win the backing of the Modi administration, which aims to attract more foreign investment.

With Western brands leaving the field, Chinese companies are focused on the question of who will fill the vacuum.

Among Chinese brands, mid-tier player Oppo faces pressure as larger rival Xiaomi expands its presence in India. The smaller Vivo is continuing its efforts to climb up the value chain. According to IDC's mobile phone tracker released on May 11, Xiaomi led the market in India for the first quarter of 2018 with a 30.3% share, followed by Samsung Electronics with a 25.1% share. Oppo was in third place at 7.4%, Vivo with 6.7%, and Transsion at 4.6%. They all hail from China, except Samsung. 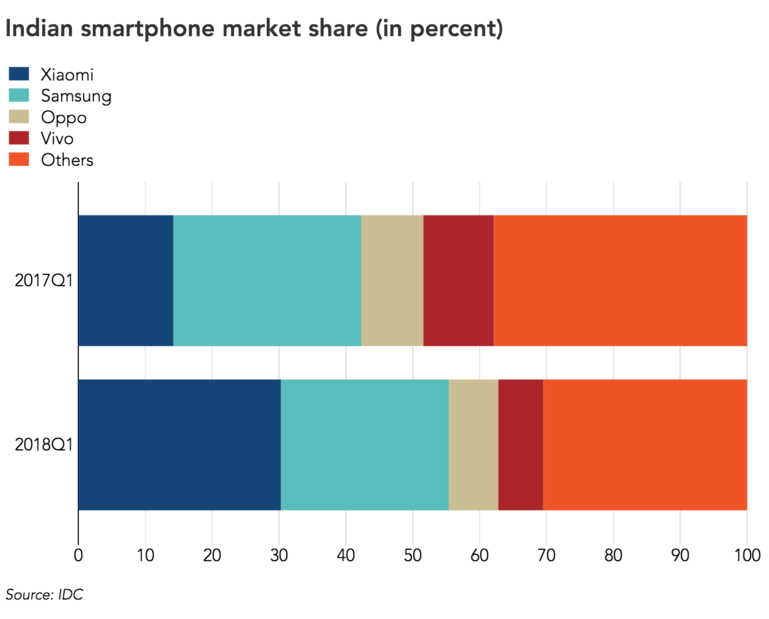 "With Realme, Oppo [aims] to expand its e-commerce presence and grab market share from its peers," said Shobhit Srivastava, an analyst with Counterpoint Research based in Gurgaon. "Since Realme is in the mid-tier segment, it can also potentially cannibalize some of Oppo's A series smartphone share."

Before Realme was split from Oppo, its first and only product -- a smartphone introduced in May with a price tag of $131 -- had proved a hit among India's cost-conscious customers. The company claims to have sold roughly 400,000 units in 40 days, and Realme grabbed 1% of total phone sales in that quarter based on Counterpoint Research's calculations.

Statistics from IDC show that Oppo ranked as the world's fifth-largest smartphone company by sales, shipping a total 27.3 million smartphones worldwide in the fourth quarter of last year. Its products can be found in countries ranging from Vietnam to Egypt and Russia. In June, Oppo ventured into the European market by launching its Find X model in the Louvre, Paris.

Oppo has already secured a toehold in India's premium smartphone market. Market statistics show that OnePlus, another spin-off of Oppo targeting higher-income buyers, surpassed the sales of Samsung's flagship model in the country for the first time during the second quarter, hitting an all-time high with a 40% market share.

Neither Realme nor Oppo has disclosed the linkage between the two companies, but their business registration leaves a clue. According to Qixin, a database featuring registration information for Chinese companies, Li's company -- registered in June in Shenzhen -- has been backed by Guangdong Oujia Holdings, the same company that has invested in Oppo.

Oppo did not immediately respond to Nikkei Asian Review's request for comment.

India ranks as the second-largest smartphone market after China, with 400 million users. But Srivastava said much of India's potential remains untapped and that sales of handsets priced between $200 and $400 are expected to grow 20% this year. 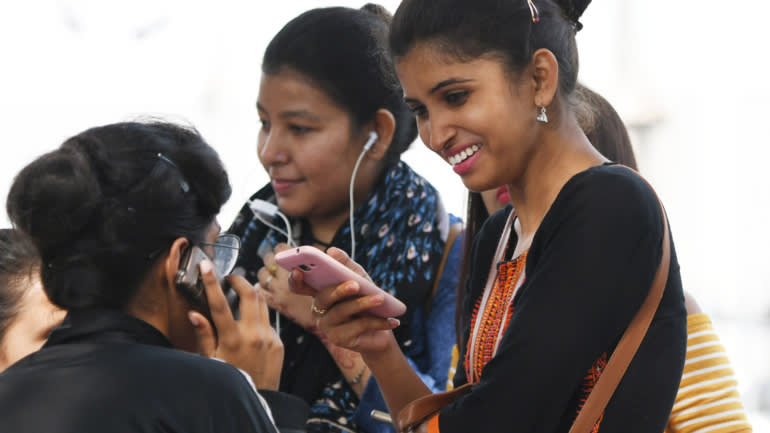 India ranks as the second-largest smartphone market after China, with 400 million users. (Photo by Takaki Kashiwabara)

"This makes it an attractive market for the Chinese players when their home market has already become saturated," he said. Chinese smartphone brands are struggling to crack the most lucrative market -- the U.S. -- amid rising trade tensions.

"With data being so cheap, Indian people are looking to upgrade to smartphones," Singhal said, noting that this provides a massive opportunity for the Chinese brands to expand in India. "I think the next part of the battle will be among the Chinese players themselves to increase their collective and individual share in the Indian market."