Specifically, Godfrey plans to nearly triple the number of its Twenty Four Seven round-the-clock convenience stores to 170 in fiscal 2018, which started on April 1.

Godfrey also plans to open a new 24Seven outlet in Mumbai, a commercial hub on the west coast of India, next spring as the first step toward the nationwide expansion of its convenience store network.

The New Delhi-based company currently operates 24Seven stores only in the National Capital Region and other northern parts of the world's second-most populous country.

In India, there are many supermarkets primarily selling fresh foods, but convenience stores are still uncommon. Godfrey is rapidly expanding its footprint in the country's burgeoning convenience store industry.

Samir Modi, a Godfrey board member in charge of the convenience store business, unveiled the company's aggressive 24Seven outlet network expansion plan in an interview with the Nikkei Marketing Journal.

The new 24Seven convenience stores to be set up during fiscal 2018 will be located in New Delhi, Gurugram near the national capital, and elsewhere in northern India.

Modi said Godfrey will open its first 24Seven convenience store in Mumbai in April next year. He added that Godfrey will also make forays into other big cities such as Bangalore in southern India, Kolkata in eastern India and Pune in western India.

The cost of expanding the 24Seven convenience store network will be covered by the company's internal reserves, in principle, Modi said.

At present, 24Seven convenience stores are all directly managed by Godfrey. But Modi said that although the company will directly manage at least the first 1,000 outlets, it will also open franchise outlets thereafter.

Godfrey wants to establish a network of 10,000 24Seven outlets, including franchises, across India within five years, Modi said, painting a bullish picture of the company's future convenience store business.

In addition to expanding the number of 24Seven convenience stores, Godfrey will also seek to boost average spending per customer to 300 rupees from 225 rupees at present by opening large-scale outlets similar to the 64th one in Gurugram and selling more products.

Modi said that Godfrey will increase the number of imported items that are available only at 24Seven convenience stores, such as cookies and chocolates, to more than 350 from 90 at present as part of its efforts to boost revenues.

The company will analyze the attributes of customers, such as sex and age, through the images and offer bargains that vary from store to store to attract customers. 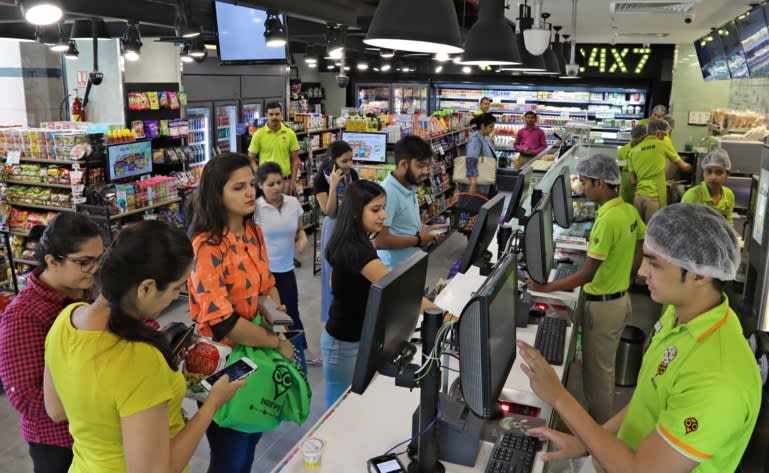 A newly opened 24Seven convenience store in a New Delhi suburb is crowded with customers.

The first 24Seven convenience store opened in 2004. The name refers to the stores' operating 24 hours a day, seven days a week.

Both the name and interior of 24Seven stores resemble outlets operated by Seven-Eleven Japan, the nation's leading convenience store chain.

When asked about such similarities, Modi revealed that Godfrey had invited former employees of Seven-Eleven Japan as consultants for six years until March this year.

In India, foreign companies effectively cannot buy into local retailers that sell multiple brands, such as supermarkets and convenience stores.

The former government of Prime Minister Manmohan Singh lifted a ban on foreign companies' investment in multi-brand retailers and allowed foreign ownership of up to 51%. But there were tough local content ratio and other requirements.

The current government of Prime Minister Narendra Modi, which was inaugurated in 2014, effectively does not allow foreign companies to buy into multi-brand retailers.

But there is a possibility that the Modi administration will allow foreign companies to buy into multi-brand retailers after the general election in the spring of 2019, Godfrey's Modi said.

According to a survey by British research company Euromonitor International, the Indian convenience store market is led by India's Future Group. Godfrey is the third-biggest player after government-affiliated cooperative stores.

The Indian convenience store market was worth 28.9 billion rupees in 2017.