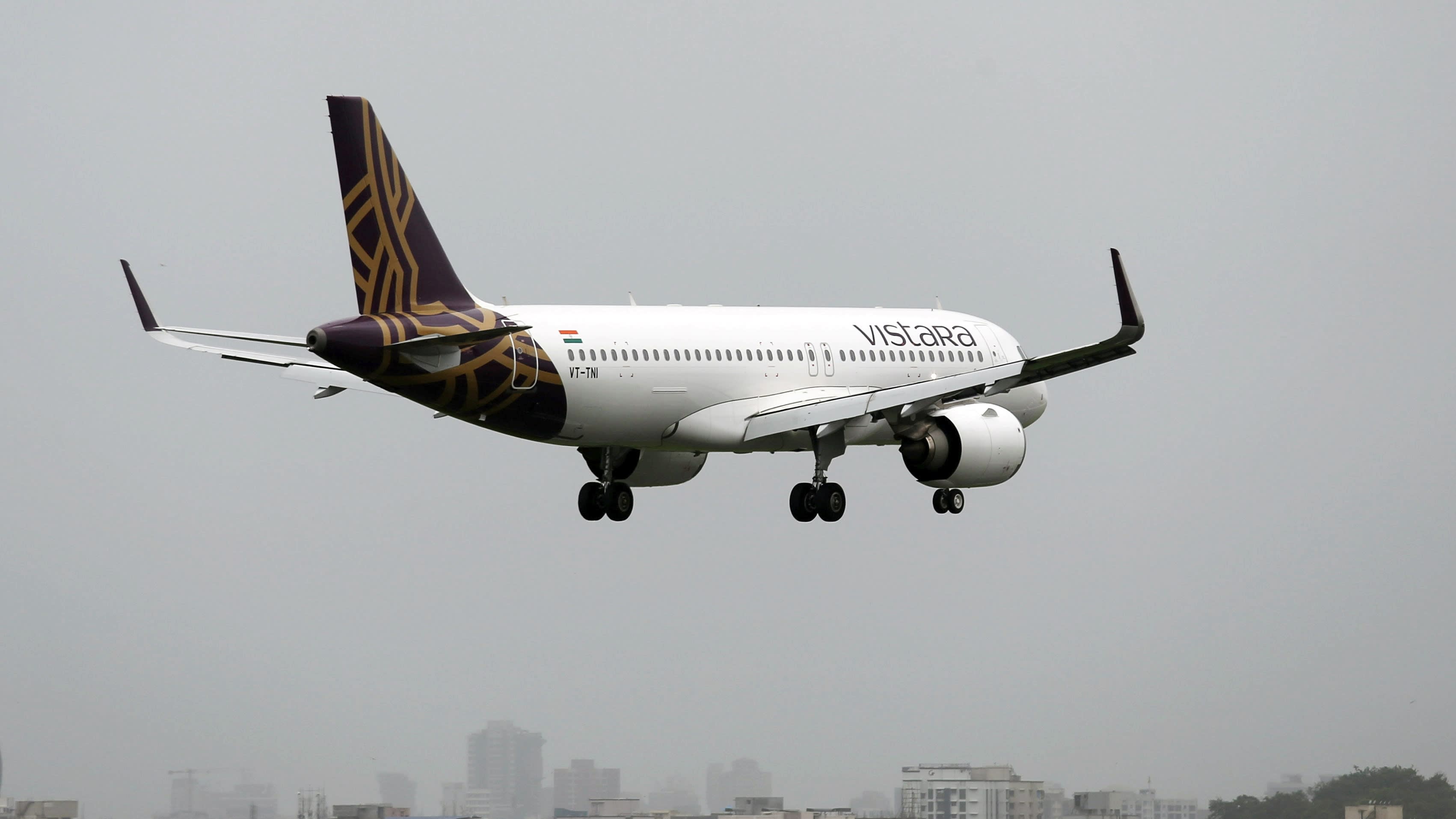 Vistara grew passenger traffic by 37% this year by keeping customer complaints at a minimum.   © Reuters

MUMBAI/SINGAPORE -- Vistara, India's full-service domestic airline, has drawn travelers at nearly double the rate of the aggregate market growth, setting itself apart from rivals trapped in a cutthroat price war.

Much of the success is due to minority owner Singapore Airlines, voted the world's best carrier this year. When the Singaporean carrier formed a 49-51 joint venture with Indian conglomerate Tata Group in 2015, it decided against another low-cost operation, choosing instead to establish a full-service alternative to Jet Airways and Air India, the nation's second- and third-largest players in that field, respectively.

Now Vistara, operated by Tata SIA Airlines, is preparing to initiate international flights, and will expand its fleet to 3.5 times the current size within five years.

When Vistara unveiled its newest passenger plane last month, an Airbus A320neo, CEO Leslie Thng invoked the name of the late J.R.D. Tata, a former group chairman who launched India's first airline in 1932. "We are proud to claim and carry forward the baton of J.R.D. Tata's legacy and vision in building a world-class, trend-setting airline," said Thng.

Vistara provides ample sitting room and in-flight meals courtesy of a tie-up with Tata Group's hotel arm. It is the only domestic carrier to offer mid-tier premium economy seating, along with business- and economy-class tickets. The airline's attentive customer service has gained positive attention. Its business strategy resembles that of Bangkok Airways, which has been trying to set itself apart from flag carrier Thai Airways International as well as budget airlines.

Air India, the state carrier, is buckling under sour earnings and an aging fleet of aircraft. Rival Jet Airways, meanwhile, endured a black eye to its brand last month when crew members forgot to activate a switch that regulates cabin pressure during a flight, causing dozens of passengers to suffer ear and nose bleeds. That accident served to boost Vistara's appeal.

A visit to an air- booking site on Sept. 29 showed Vistara selling a 3 p.m. one-way flight from Mumbai to New Delhi for 4,272 rupees ($57.42). Low-cost carrier IndiGo, India's largest airline, charged 19% less for the same trip at around the same time. A full-service Air India flight is 13% cheaper, indicating a sharp gap in demand among the three airlines.

One businessman in his 30s said Vistara's meals and service are the best among domestic airlines. Many other travelers share his views: the company took in roughly 3.5 million passengers during the first eight months of the year, a 37% jump from a year earlier. By comparison, India's entire domestic market grew 21% during the same span.

Since the 1990s, Singapore Airlines has sought to expand beyond its limited home market and establish operational hubs in greener pastures. But previous attempts to purchase large stakes in Indian and Chinese carriers ultimately went nowhere. Flight attendants with Singapore Airlines, which is renowned for exceptional customer service. The carrier has been coaching Vistara on how to provide better service.   © Reuters

The Singaporean carrier has apparently finally struck gold with Vistara. Although the Indian airline is still a relatively minor business, Singapore Airlines expects a significant contribution from the joint venture in due course, CEO Goh Choon Phong said last year.

Skytrax, the British rating service that publishes an annual ranking for global air carriers, crowned Singapore Airlines as the No. 1 airline in July. Vistara was also recognized for having the best airline staff in central Asia and India. Complaints to the carrier numbered only 0.1 per 10,000 passengers in August, or a third of the number claimed by IndiGo.

However, Vistara holds only 3.8% of the Indian market, and it has yet to pull itself out of the red. Singapore Airlines says it hopes that the carrier will turn a profit in fiscal 2019, but higher fuel prices and other headwinds may push back that goal.

Vistara hopes to start offering international flights by the end of the current year. It took a major step toward that goal by entering into a code-sharing agreement with Japan Airlines last year covering domestic flights within each country. The airline inked a similar deal with British Airways in September, burnishing its reputation as a world-class carrier.