MUMBAI -- Indian startup MyCrop Technologies has produced a mobile app that it says can help raise agricultural productivity in Asia and beyond, benefiting both farmers and consumers.

Co-founder Deepak Pareek returned recently from Iran, invited by the government there to test the feasibility of the MyCrop Tech platform for farmers. The app uses big data, artificial intelligence and machine learning to provide insights on how to increase yields, the best crops for a given type of soil and the timing on when to grow them.

The company is talking with governments and stakeholders in Thailand, Vietnam and the Philippines to introduce the platform in those countries, Pareek told the Nikkei Asian Review in an interview. He also has been approached by authorities in Kenya to test the platform there. Spain is another potential market, the tech entrepreneur said.

Pareek sees this geographic diversification as a way to avoid "putting all the eggs in one basket," balancing the uncertainty around government policies in any one country. 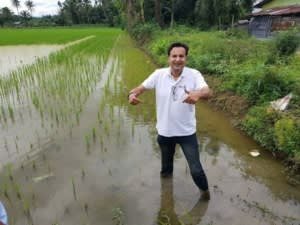 "By next year, we hope to bring on board some 10,000 farmers," said Pareek, who has worked for institutions such as the Export-Import Bank of India and Tata Honeywell. He holds a Master of Business Administration degree from Regis University in the U.S. city of Denver.

The app is free for farmers to use. MyCrop charges a fee for making data on what and how much farmers are growing available to fertilizer companies and financial institutions, instead of levying the farmers themselves.

Most projects the company plans to enter receive government funding, so MyCrop requires little capital. The company is sustainable, but might need investors to grow in the future, Pareek said. With the current 15% month-on-month growth, he expects to generate $100,000 in revenue by December.

He started MyCrop Technologies in 2016 with friends and entrepreneurs Paresh Shah and Vinesh Patel, all of them hailing from western state of Gujarat. Pareek left a two-decade career, looking into education and agriculture as outlets for his technological expertise before focusing on farming.

Before incorporating MyCrop, Pareek visited about 10 countries, met 1,500 farmers and got involved in paddy harvesting to understand how the ecosystem works. He started with the premise that food shortages were a "stupid problem" that could be solved with relevant data.

Pareek noted the contradiction that farmers should face dire financial problems while 800 million people go hungry around the world.

"It is a situation where both demand and supply are there, so what can we do about it?" he said.

Agriculture is plagued by misconceptions and miscommunication among all stakeholders, he said, including farmers, governments, financial institutions and insurance companies.

Pareek concluded that virtually everyone in farming sees only one aspect of the sector and makes decisions based on that limited perception.

The company does most of the groundwork through what Pareek calls "Farmer Mitras," or village-level entrepreneurs. These Farmer Mitras earn commissions for gathering data about the farmers, their land and crop, as well as the area's climatic conditions. This data is used to forecast agricultural output through new technologies such as artificial intelligence and machine learning.

The startup also brings other stakeholders to its platform such as bankers, fertilizer businesses and insurance companies. Pareek reckons that a more professional approach toward agri-financing could go a long way in increasing productivity.

"Financing ... typically is more philanthropic than an actual decision taken by a banker," he said. "We believe that bankers should be given correct information about a farmer as like any other client."

Farmers should detail their costs for growing a crop, and they can rework their plans if the bank doesn't see them as viable, Pareek said. "This way it is a data-driven decision rather than a philanthropy," he said.

For fertilizer sellers and other stakeholders, MyCrop offers a dashboard with information such as the crops that farmers are buying, how they are buying them and the crops already available. The dashboard can be customized to a company's needs, Pareek said.

"It can be focused on productivity, cost, labor -- we are having all this data," he said. The user can "see specific farmers: what this guy is doing, at what stage he is, where his land is, what he has bought in bulk of his orders [as well as] about his land, about crop he has grown, about status of the farm plant."

"So we are creating a 360-degree view of someone nobody wants to profile otherwise because it is too costly and not economical," he said.