PT Mayora early this week said it would invest $80 million in the Philippines over the next five years and build a plant to produce its popular Kopiko instant coffee mixes. The company said the factory will help meet growing domestic and overseas demand, but it did not disclose the plant's capacity.

The move is a fresh challenge for Nestle and Universal Robina, which are trying to defend their shrinking market shares in the Philippines' $1.1 billion instant coffee market, which, according to Euromonitor International, is forecast to grow to nearly $1.5 billion by 2023. Snack and beverage tycoon Carlos Chan also ventured into instant coffee recently.

"Competition is always welcome," said Nestle Philippines Chairman and CEO Kais Marzouki, adding that his company will respond by increasing investment. "We continuously expand our capacity. Investing is a continuous process," Marzouki told reporters Thursday at the opening of a new 2.8 billion peso ($54 million) plant that will make chocolate drinks and all-purpose cream.

"This brings down the cost for Kopiko and will allow the company to go full force on its marketing," he said.

At present, Kopiko coffee mixes are imported from Indonesia. PT Mayora in recent years expanded its product line and employed top Filipino celebrities to raise its profile in the Philippines. The marketing push has been a roaring success, helping the company nearly double its market share over the last five years.

"In recognition of Kopiko's strong Philippine base, along with our growing business in the region, we are expanding our manufacturing and processing operations beyond Indonesia," said PT Mayora President Andre Atmadja.

Nestle and Universal Robina are feeling the heat.Grappling with rising raw material costs, a Nestle official last year said the company might move its instant coffee production to Indonesia or Vietnam if the government did not offer incentives for companies that buy and produce locally. After a public outcry, Nestle backtracked and promised to maintain local production. 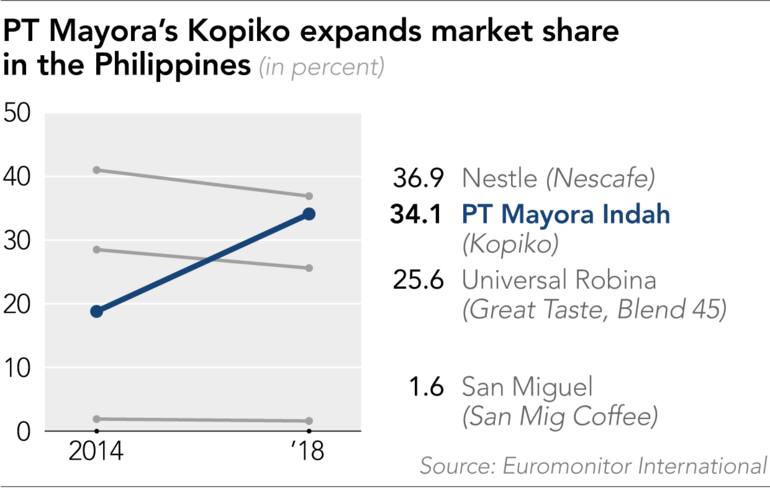 Instant coffee mixes are hugely popular in the Philippines, with its population of more than 100 million. Such mixes account for 90% of coffee consumption, according to a 2017 policy brief by the Department of Trade and Industry, which also said the country will become one the world's top-five consumers of instant coffee by 2021.

In 2017, lawmakers bowed to pressure from companies and consumers, and excluded coffee mixes from the list of sugar-sweetened beverages subject to a new consumption tax.

Irwin Lee, who became Universal Robina's new chief executive in 2018, hinted that coffee would be a priority. "The challenge is in the coffee wars. It's not just Coke versus Pepsi, or in laundry, or in shampoo wars. There's also coffee wars, so that is where we're focusing our efforts. We are working quite fast to stabilize that, " Lee was quoted by Philippine Star newspaper as saying last year.

Coffee makes up a less than a third of Universal Robina's domestic business, Dela Cruz said. The company has food and beverage ventures across Southeast Asia, China and Oceania. In the nine-month period that ended in September 2018, Universal Robina's net income fell 17% on the year to 6.98 billion pesos, on sales of 95.53 billion pesos, rose 3%, partly due to a weaker showing by its coffee business.

PT Mayora has said it will source some raw materials locally, but this may be challenging. Nestle and Universal Robina have stepped up their procurement, as supplies of ingredients such as sugar fluctuate.

Nestle is strengthening ties with local coffee farmers by giving them financial assistance, while Universal Robina has purchased local sugar millers to ensure stable supplies. These assets give the company an advantage, Dela Cruz said.